Event: Final results and shareholder presentation for the year to 30 June 2017 published 19 October 2017

Summary: July’s trading statement from this medical disinfectants specialist had already signalled these record results. However, the update showed underlying revenue growth of just 7%, with the UK up 3% and overseas up 10%. I’ve therefore had to delve deep into the numbers to ensure TSTL’s main products continue to sell relatively well. At least the company’s accounts and recent acquisition showed more obvious appeal. I must confess, I am nervous comparing the share-price valuation against the medium-term expansion potential, especially with the prospect of sizeable North American revenue as distant as ever. I continue to hold. 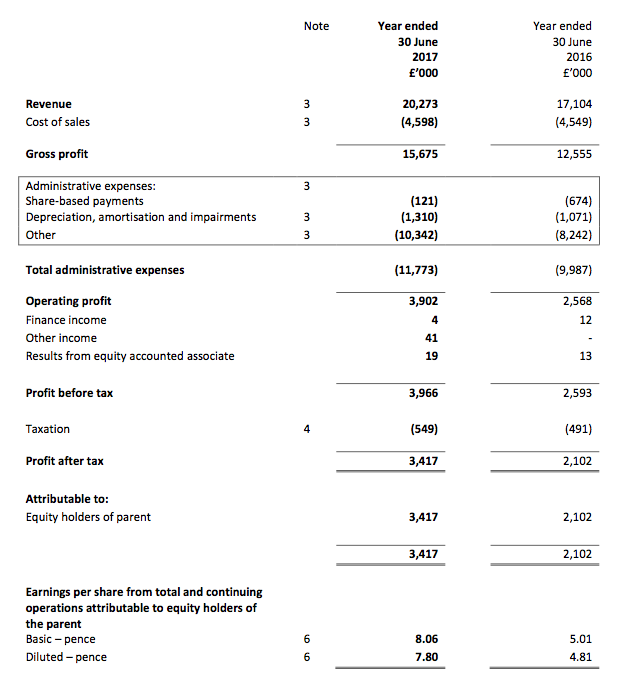 * The 7% figure did not seem too spectacular

Revenue did indeed exceed £20m at £20.3m (up 19%) and pre-tax profit before share-based payments was indeed at least £4m at £4.1m (up 25%). The results set a new record for TSTL and extended the firm’s impressive recovery following a troubled 2013:

The annual dividend was lifted 21%, but there was no completing a hat-trick of 3p per share special dividends. TSTL’s cash hoard is instead being earmarked for “earnings enhancing opportunities”. More on those later.

I wondered within my July write-up why TSTL had neglected to mention the progress of its UK division. I concluded at the time:

“It seems to me UK revenue dropped a fraction during the second half and gained only 3% during the full year.”

That was in fact the case. Here are my new H1/H2 sums:

Meanwhile, overseas revenue soared 42% for the full year and 41% during the second half. However, the international effort was boosted by currency movements and the purchase of the group’s Australian distributor.

One striking line from the management narrative was that, after adjusting for the foreign-exchange gains and acquisition, underlying sales progress for the wider group was just 7%.

That 7% figure did not seem too spectacular to me given TSTL’s buoyant share price, so I’ve had to delve into the details to determine exactly how the group performed. I have to admit, there is a mixed picture.

* I think many were expecting greater overseas growth

TSTL’s investor presentation for these annual figures, as well as the presentation from February’s interims, helpfully disclosed the sources of the company’s additional revenue. I’ve summarised the details below:

On the face of it, the second half was not that impressive for the overseas division.

I think many shareholders — including me — had been expecting greater overseas growth.

That said, the sums do improve if I exclude TSTL’s overseas distributors from the calculations and assume the £676k was produced entirely by the group’s in-house foreign operations.

(Management remarks at the investor presentation suggested TSTL engages with about a dozen worthwhile foreign distributors, as well as about 20 other distributors where the time and effort required is becoming somewhat debatable. The combined effort of the distributors produced flat revenue for 2017, which was all recorded in GBP and therefore not bolstered by currency movements).

Here are some further numbers from TSTL’s investor presentations:

From this perspective, the aforementioned extra revenue of £676k represents a more attractive 17% of last year’s £4,060k in-house overseas revenue. The 8% second-half improvement (£175k / £2,289k) is a tad more reassuring, too.

The following stats have been extracted from TSTL’s investor presentations:

‘Core’ represents the backbone of TSTL’s business — that is, all the patent-protected foams, wipes and solutions that disinfect small medical devices.

Everything else — the group’s commodity products as well as the disinfectants for hospital surfaces, veterinary surgeries and pharmaceutical cleanrooms — is classed as ‘other’.

TSTL has regularly claimed the UK is a mature market, but the company does seem able to squeeze out additional domestic sales every year.

However, I am not anticipating the ‘core’ UK products to deliver more than 5% annual revenue growth during the years ahead.

I therefore estimate the underlying international growth rate — that is, adjusted for currency movements and the Australian acquisition — to be somewhere between 12% and 14%.

* Australia and the hunt for additional “earnings enhancing opportunities”

A notable feature of these 2017 results was the impact of TSTL’s Australian acquisition.

TSTL purchased its Australian distributor during August 2016 for £1.1m and the results narrative claimed the deal contributed incremental pre-tax profit of £824k.

The purchase seemed remarkably lucrative and straightforward for TSTL — for a seemingly low price, the company simply captured the sizeable profit the Australian outfit had previously enjoyed as a distributor.

Management comments at the investor presentation indicated the integration and subsequent performance of the new Australian subsidiary had all gone to plan.

The executives were surprisingly open about buying other distributors, too. There was talk at the presentation of “several ideal acquisition targets” and, if I recall correctly, the Far East and France were cited.

If the initial returns from Australia are anything to go by, I would welcome TSTL spending its cash hoard on other significant distributors.

* EPA and FDA for the USA

One or two snippets were given by management about North America during the investor presentation.

I was pleased the delay with the EPA was explained.

The EPA had apparently agreed months ago with TSTL that the company did not have to submit data on citric acid with its product application.

However, following TSTL submitting its application, the EPA then declared the citric-acid information was needed after all.

TSTL will submit a revised product application by 15 November and an EPA decision is expected during May 2018.

Product approval from the FDA — which I feel is the real milestone event that could lead to substantial US revenue — was said to be achievable “within three years”.

I have to say, FDA approval during 2020 does seem a long time away. TSTL first disclosed it was working towards an FDA application in 2015.

I should add that TSTL maintains it is on track to produce its first North American revenue during the year to 30 June 2019.

I continue to believe that projection means very little, as it could be achieved by earning $1 on 30 June 2019.

The projection may mean even less if the $1 earned is Canadian rather than American.

* TSTL and two directors own a collective 9% of MobileODT

The investor presentation divulged a few titbits about MobileODT and its mobile colposcope.

I was not sure what to make of the fact that TSTL’s chairman and another non-exec acquired 6% of MobileODT at the same time TSTL acquired 3%.

On the one hand, I suppose the directors’ personal investments indicate MobileODT has some promise.

But on the other hand, why did TSTL purchase only 3% (for £589k) when two directors were buying 6% between them? I’d have thought TSTL had the deeper pockets.

The MobileODT colposcope is FDA-approved and is being used in the US, and I asked at the presentation how the device was being disinfected ahead of a TSTL product being given an EPA approval.

I was told the colposcope was not being disinfected.

I think it’s rather odd that MobileODT, which apparently had the foresight to consider product disinfection and link up with TSTL, is currently happy to see its colposcopes used in the States without proper cleaning.

Anyway, the presentation slides also revealed a second mobile medical device that I presume can be cleaned by TSTL’s wipes or foams:

I trust TSTL can discover further mobile medical devices its products can disinfect.

* Both guidance targets seem very achievable to me

TSTL took the opportunity to reaffirm its 2017-2019 guidance:

“We continue to believe that we can grow sales in the range of 10% to 15% per annum as an annual average over the three years ending 30 June 2019.

Both aims currently appear very achievable to me.

For one thing, it is important to realise the 10% to 15% sales growth target is an annual average.

Therefore 2019 revenue has to reach only £22.8m — or gain just 6% both this year and next — for the top line to have compounded at the low end of the range.

I asked management at the presentation about whether the aforementioned 10% underlying revenue growth for international was representative of what could be expected during the next few years.

All told, I formed the impression that TSTL may not be delivering 10%-15% organic revenue growth this year and next.

The 17.5% margin goal does not look too hard to achieve, either.

The pre-tax margin was 20% during 2017 and for 2018, a full-year contribution from the Australian division ought to entirely offset the additional costs from the US regulatory venture.

Mind you, the executives did mention during the investor presentation that the gross margin was likely to be trimmed during 2018 as supply costs increased.

But a similar worry was expressed by the board this time last year, and yet the gross margin improved from 73% to 77%.

During the last five years, total expenditure on tangible and intangible assets has been covered by the combined depreciation and amortisation charge levied against earnings.

Meanwhile, the aggregate working-capital movement shows a small inflow of cash — which is quite remarkable given the expansion of the wider business since 2013.

Even though the generous cash flow funded a total £2.9m spent on the Australian purchase, the MobileODT investment and a 3p per share special dividend, the year-end cash position was left only £0.7m lighter at £5.1m.

Management revealed the latest cash position to be £5.8m (equivalent to 13.5p per share). The balance sheet continues to carry no debt and no pension obligations.

Elsewhere, TSTL’s operating margin remains at a level that underlines the competitive strength of the group’s patents, proprietary know-how and independent scientific testimonies:

Returns on equity still run at very acceptable levels, too.

That multiple certainly seems optimistic, especially as the group’s underlying growth rate last year was not that spectacular at 7%.

Assuming TSTL’s revenue reaches the £26m top-end of the group’s 2019 guidance and the operating margin (ignoring North American costs) is sustained above the projected 17.5% at 20%, I arrive at a 10p per share earnings guess.

That 10p per share guess would bring the possible 2019 underlying P/E down to about 25 — still a rich multiple and one that exposes the share price to potential problems while the North American venture remains stuck in the development stage.

I sold 21% of my TSTL holding last month at 289p because I thought better medium-term opportunities lay elsewhere in my portfolio.

Sure, I was quite impressed by TSTL’s open-day presentation and the potential for the group’s projects in the United States. Furthermore, the disinfectants enjoy ‘repeat-purchase’ characteristics and the accounts remain in excellent shape.

However, I do have the nagging doubt that underlying progress may not be brilliant during the next year or two. I also have to remind myself that it may be 2020 at the very earliest before any material US revenue is produced.

7 thoughts on “Tristel: I Had To Delve Deep Into These 2017 Results After Underlying Revenue Gained Only 7%”