Summary: July’s upbeat trading statement from this medical disinfectants specialist had already signalled these record results. The finer details revealed UK revenue enjoying a healthy second-half performance and overseas operations progressing consistently well. The financials appear to be in order, too, although cracking the United States is taking a bit more time and money than expected. The executives remain confident and have issued bold new projections, which is all reflected by the elevated share-price rating. I continue to hold. 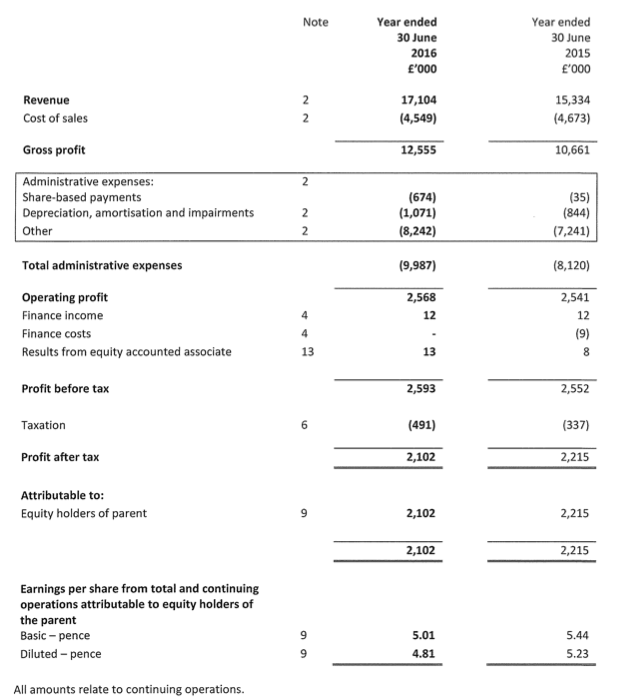 Note 5 of the 2016 annual report revealed a £125k intangible write-off (see point 7 of the first Comment below), which arguably could have been overlooked as well for calculating an underlying full-year profit:

Anyway, total pre-tax profit excluding any adjustments was flat due to the startling share-option charge (more on that later) disclosed in the first half:

Basic earnings declined due to the overall tax rate advancing from 13% to 19%.

The ordinary annual dividend was raised an impressive 22%, although the improvement was almost entirely delivered through the interim payout.

Overall, H2 revenue gained 15% versus 8% for H1 (you may recall that 8% was someway below the 15% rate TSTL had then been predicting for the full year):

UK revenue increased by 9% during H2 and, within that improvement, I calculate UK revenue generated from the core medical wipes and surface-cleaning products climbed an astonishing 20%.

TSTL’s preceding interims revealed these core products had produced only a 3% UK revenue advance during H1, and at the time management had referred to “the anticipated slowing of sales growth in the UK” and the NHS suffering from “financial distress”.

As such, the apparently random ups and downs of NHS ordering remains the only theory for the improved UK result.

It’s also worth remarking on Note 2 of the 2016 annual report, which reveals TSTL derived 18% more revenue from its largest customer — the NHS supply chain — during the year:

At the shareholder presentation, management was keen to stress this sizeable increase was not due to TSTL encouraging the NHS to stockpile supplies. Management also claimed greater orders coming through the NHS supply chain — rather than direct from the hospitals themselves — would not make any difference to TSTL.

One final point on the UK — I had previously wondered whether substantial price increases on some legacy products had helped boost revenue at home. I now see the results presentation indicating that this was not the case.

In fact,  ‘UK Human Healthcare — Other’, which includes the legacy products in question, dropped 20% during the year:

There was no inconsistency with overseas revenue during the year:

I calculate international sales of the core medical wipes and surface-cleaning products advanced a chunky 24%-25% during both H1 and H2. Notably, total overseas sales during H2 represented 42% of the group’s top line.

The bulk of the international gains came from TSTL’s direct overseas operations, where revenue grew a super 30% to £4.1m. These direct foreign operations are now becoming more productive for the group — in comparison, revenue from independent overseas distributors climbed ‘only’ 13% to £2.6m.

TSTL helpfully disclosed the revenue contributions from its direct overseas operations within the results presentation:

* The executives “can imagine a scenario” when the German unit (which also sells to Austria, Switzerland and Poland) could one day generate as much revenue as the UK (i.e. £10m)

* Australia has up until recently sold only one product — TSTL’s flagship wipes system — but regulatory approval has now been obtained to sell other TSTL products.

* TSTL’s post-year-end purchase of the Australian operation for £1.1m ought to deliver at least an extra £750k of annual revenue.

* The directors were “very pleased” with China, although this division sells only one low-key TSTL device and both the Chinese market and people involved are “very unpredictable”.

(The implication was not to get carried away with China’s 129% reported growth.)

* Hong Kong suffered due to a packaging problem that has now been resolved.

* The auditors advice was to switch to Monte Carlo

You may recall TSTL recorded a £1,015k option charge within its H1 statement. However, the annual figures showed the charge reduced to £674k.

The £341k ‘refund’ was due to TSTL changing its share-based payment calculation method from Black Scholes to Monte Carlo.

No, I have no idea either about which method is more suitable… but management claimed its auditors advised the company to switch.

Normally I’d overlook such technicalities, but I make an exception with TSTL… simply because the options in question were granted — and vested — in rather cavalier fashion (at least to me).

(For some background on these particular options, you can read my original opinion here and subsequent update here.)

I can only guess that TSTL was fortunate that the replacement Monte Carlo calculation method resulted in a lower figure.

One day I will have to study exactly how the cost of share-based payments are calculated and understand why companies can use different methods and arrive at different results.

For what it is worth, TSTL’s contentious options numbered 1,198,017, had an exercise price of 1p and would vest if the share price stayed at 134p or more for 30 consecutive trading days.

One last point on these particular options — the share price has (coincidentally) once again topped 134p for 30 days as of today.

I doubt anyone could have begrudged the employees their option payday had it come AFTER February’s H1 results… and therefore AFTER the company admitted its previous revenue target for 2017 would be “unlikely to be achieved”.

During the last five years, total expenditure on tangible and intangible assets has been covered by the combined depreciation and amortisation charge levied against earnings.

Meanwhile, the aggregate working-capital movement shows a small inflow of cash — which is quite remarkable given the expansion of the wider business since 2012.

The cash flow characteristics pushed the year-end bank balance to £5.7m, which has since been offset by the summer’s 3p per share special dividend (£1.3m) and the Australian purchase (£1.1m).

Management revealed the latest cash position to be £3.7m (equivalent to 8.7p per share). The balance sheet continues to carry no debt and no pension obligations.

Elsewhere, TSTL’s operating margin has grown to a level where it’s now obvious the group’s competitive advantage — a mix of brands, patents, proprietary know-how and scientific testimonies — is very lucrative:

Returns on equity are now running at very acceptable levels, too.

I was a little surprised to see TSTL publish some revised three-year targets within Monday’s statement.

First off, the previous guidance period ran until 2017. So I suppose the group could have waited another year to fine-tune its expectations.

What’s more, there’s scope for (further) problems if the group’s progress does not meet its projections. At least TSTL acknowledges this “double-edged sword”:

“Whilst setting very explicit and precise goals may be helpful for stakeholders, it can also be a double-edged sword when performance veers slightly off track in any given short term period. We experienced this at the time of our interim results in February 2016 when the share price reacted strongly to a relatively subdued performance in top-line growth during the first half.”

I doubt TSTL’s executives would once again issue three-year public guidance unless they were ultra-confident of achieving their goals.

Note that TSTL’s new revenue target does not include any contribution from new markets, including the United States (see below).

* The FDA approval process drags on and the costs are rising

There was mixed news with the plan to launch a handful of products in the United States.

Certainly the regulatory timescale continues to be pushed back and the start-up costs involved continue to ratchet up.

This time last year, the executives were hoping to have submitted two products for FDA approval by June 2016 — and to receive that approval for marketing by June 2017.

However, Monday’s results stated “various scientific protocols” would be submitted to the FDA by the end of this month and it may take until “early 2017” for “all these protocols to be finalised”.

In addition, management owned up to dropping the prediction of a 2017 FDA approval and instead now indicates the firm is “on track to generate US revenues during the financial year commencing July 2018”.

I guess that could mean TSTL sells its very first US product on 30 June 2019. That date seems a long way off.

Turning to US costs, earlier this year management said the cost of obtaining FDA approval for the initial products would be around £600k. The executives also claimed there would be “no material costs of a USA operation” and “no US subsidiary or presence”.

Furthermore, the directors are now disclosing the likelihood of additional “mobilisation costs” of £500k to fund a support team in the States during 2017/18.

On the plus side, at least TSTL revealed its best estimate as to what the US could deliver — a market worth £18m annually based on just the two disinfectant products being submitted for FDA approval.

But there was no comment on how much of that potential £18m could actually be secured.

All told, I trust the protracted FDA approval process and the growing associated costs are signals that the opportunity Stateside could be somewhat greater than TSTL’s original expectations.

Subtract the cash position of almost 9p per share from the 159p share price and the underlying trailing P/E comes to 150p/6.8p = 22.

That estimate would bring the possible 2019 P/E down to 16 based on the cash pile perhaps having advanced to 20p a share.

Although the shares don’t look to be an obvious bargain at 159p, I continue to hold because TSTL’s main disinfectant products are repeat-purchase, seem hard to replicate, enjoy respectable growth prospects and produce some pretty good accounts.

I just hope the NHS remains a happy and consistent customer and that the investment in the States one day pays off.