Summary: Oh dear — these results were something of a letdown :-( It seems TSTL’s projections of c%15 revenue growth have been dropped as UK turnover starts to stall. At least now we know why December’s AGM statement never mentioned sales! A startling £1m share-based payment and a signal for a pedestrian 5% dividend lift were other features I did not expect. Though I still hold TSTL, I have been selling during recent weeks and sold more today. 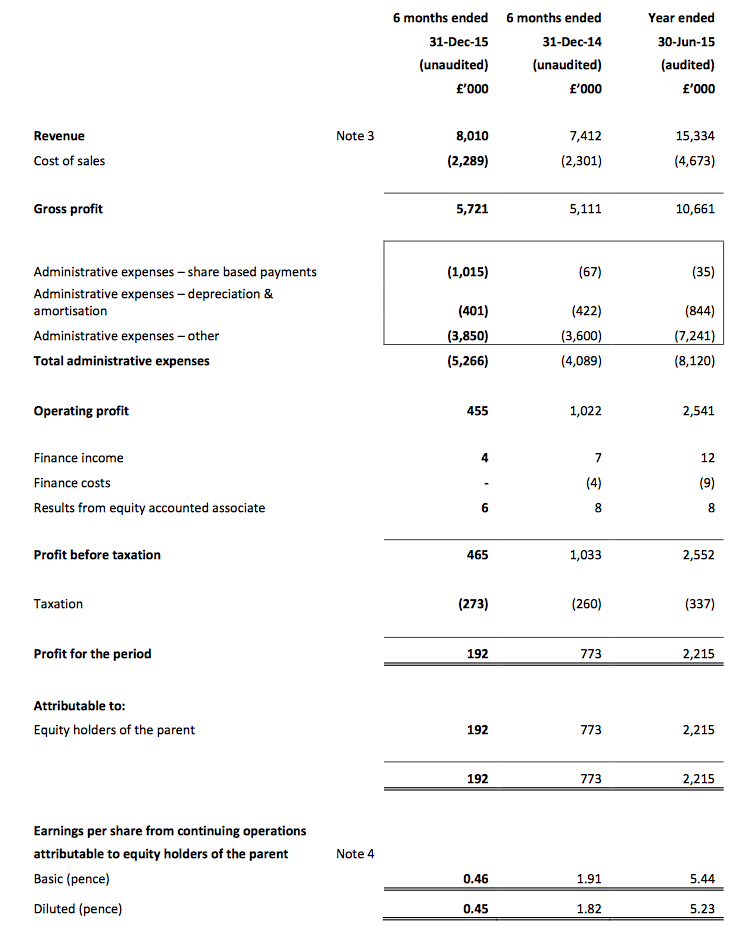 I mentioned in December that I was a little surprised that TSTL did not disclose a first-half revenue figure within its AGM statement.

AGM updates for both 2014 and 2013 had contained such numbers, and I was worried the omission suggested the top-line had not performed as well as management had hoped.

As it turns out, first-half revenue growth was indeed below what TSTL had previously projected for 2016 and 2017.

Today’s announcement revealed the top-line had advanced 8%. In contrast, TSTL’s previous two sets of results had confirmed the group was targeting c15% annual revenue growth between 2014 and 2017.

(It is now somewhat galling to look back to last October and recall that TSTL claimed the “pace of our growth could accelerate”!).

The lack of any reference to the c15% growth target in today’s statement suggests that goal has now been quietly dropped.

The lower-than-expected revenue increase was due to stalling UK sales.

“Our clearest challenge at this point in our development is to counteract the anticipated slowing of sales growth in the United Kingdom.

We will achieve this through a combination of targeting more rapid growth in overseas markets and a steady pipeline of new product launches.  Slowing growth in the United Kingdom is due to the very high levels of market penetration that we have achieved in the clinical areas of the hospital that we target.

We have also started a programme to cull lower margin products which do not incorporate our chlorine dioxide chemistry.”

I was not expecting that news.

I mean, during October’s results webinar, TSTL’s managers had previously expressed confidence of further NHS demand for the company’s disinfectants, and had cited ophthalmology as one of a number of clinical areas that could create extra UK sales.

Now we are told that UK revenue advanced just 2% during the half-year, all of which was driven by greater sales of veterinary- and cleanroom-related products. UK revenue from the main medical wipes and hospital disinfectant division actually fell 2%.

This stalled UK performance compares to a 10% improvement for UK revenue reported at the previous annual results.

Clearly something has happened in the UK division — and I trust tomorrow’s results webinar will reveal all.

In the meantime, I must admit to kicking myself for overlooking the H1/H2 split of UK revenue from last year. H1 was £5.0m and greater than H2’s £4.8m — with hindsight, that lower level of H2 UK revenue may have been a warning sign.

* At least overseas revenue continues to grow at 20%

Given the state of UK sales, I am relieved TSTL’s overseas divisions improved their combined top line by 20% to represent 36% of total revenue.

“These [overseas revenue] trends are very encouraging as we expect international markets to maintain the Group’s momentum over the course of the next couple of years as we wait for new product developments to gain traction and for new market territories to open up, for example North and South America.”

TSTL still plans to submit a regulatory application for two products to be sold in the States this year. Last October, the group mentioned it wanted to “establish a presence in most countries within Central and South America by 2017”.

Quite possibly the best ratio to emerge from these figures was the operating margin.

Adjusting for share-based payments (see below), a first-half operating profit of £1,470k represented 18% of overall revenue.

TSTL’s prior levels of profitability had been in the low-to-mid-teens, so I am pleased the value of the group’s proprietary chemical formulation is now starting to shine through.

However, a “substantial investment” is still required to gain regulatory approval for US product sales. For what it is worth, the chaps at broker Equity Development estimate this US investment will amount to £600k over the next 18 months.

TSTL reckons it can keep its pre-tax margin above 15% during this investment phase. But the group did admit the investment would mean profit during the upcoming second half would be similar to that reported for this first half. Usually the second half is more profitable than the first.

* A £1m share-based payment, and keeping the share price above 134p…

I have to confess I did not expect these results to carry a £1,015k share-based payment!

Past TSTL results have always showed share-based payments of £50k or less, and I have taken little notice of these sums.

But it now seems the company’s accounts have finally caught up with the various option grants and the sizeable share-price advance of the last few years:

“During the period an unusually large share-based payment charge of £1m was incurred, which is worthy of explanation. This non-cash expense is calculated on the fair value of share options granted in the period and is higher if the options have vested.

The Company has run an all-inclusive staff option scheme for many years and with the increase in the Company’s share price since its low point of 20 pence in February 2013, the majority of staff scheme options have vested.

During the half 35 employees exercised in aggregate 793,000 options.”

The text below is also fascinating. It’s about options vesting if the price stays above 134p:

“In addition to the staff share option scheme, a senior management scheme was agreed by the Board in April 2015.  This scheme was based on certain profit and share price performance conditions over a three-year period.

On 31 December 2015 the condition relating to the thirty day period had almost been met; and was fulfilled on 6 January 2016.  The calculation used for share based payments, arrived at the expense of £1m reported in these interim results.”

…because I am convinced if today’s 8% revenue growth figure had been published in the AGM update, the share price would not have stayed above 134p during December — and those  particular options would not have vested!

All told, I get the impression the directors have been somewhat sharp here.

* Dividend lift not that encouraging at 5%

TSTL declared a 1.14p per share interim dividend and said it would represent 40% of the current-year payout — that is, 2.85p per share.

I am surprised the annual dividend was not greater. I mean, 2.85p per share is only 5% higher than the ordinary 2.72p per share payout declared for 2015.

Such a pedestrian improvement for what is a small, growing business might be a signal of more caution to come. At least I could see no problem with cash generation to fund future payouts within today’s statement.

* I think the valuation may still look a bit rich

The chaps at broker Equity Development reckon TSTL’s share-based payments will reduce to “more normal levels of between £100k and £200k pa.”

That is as good a guess as any, so with operating profit running at £3.0m before share payments…

Then dividing that 100p by my 5.3p earnings guess, the trailing cash-adjusted P/E comes to 19.

Crikey — that multiple still appears a bit rich given near-term revenue may now advance at about 8% a year rather than 15%, and the annual dividend is being raised by only 5%.

I mentioned in October to having a few nerves about i) TSTL representing 18% of my portfolio, and; ii) the share’s premium rating.

So between the start of January and yesterday, I managed to sell 22% of my holding at 137.6p. And following today’s statement, I offloaded 19% of my remaining holding at 123.2p. With the shares now at 110p, in hindsight I should have sold more before today!

Anyway, those disposals mean I have reduced my TSTL position by around 38% since the start of the year.

Whether I should be selling more TSTL today remains to be seen. The current rating may look a little punchy, but there are few businesses around that enjoy patented-protected products, decent cash-rich books and significant overseas growth potential. In the years to come, I am hopeful today’s statement will simply be seen as a short-term blip.

Finally, I will be tuning in to tomorrow’s results webinar with keen interest. Credit to TSTL’s executives here — they are happy to host these events after great results… and the not-so-great!

10 thoughts on “Tristel: These Results Were A Letdown And I Have Been Selling”