Summary: The antibody specialist delivered another outstanding set of results, as astonishing margins, robust cash production and magnificent equity returns once again underlined the group’s wonderful economics. However, matters were tempered somewhat by management remarks about the immediate revenue potential of a new product. It could mean progress during 2018 won’t be very impressive, which may leave the current 29x multiple rather exposed. I’m hoping things work out for the best, and continue to hold. 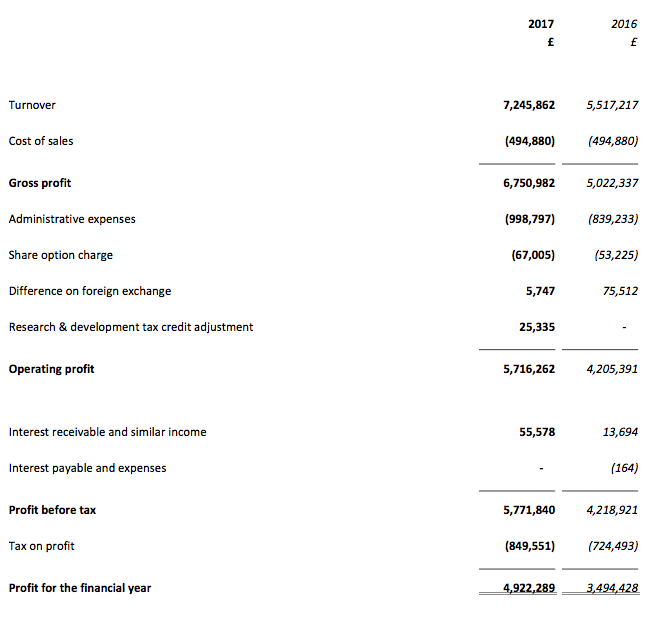 * Record results do not have a “single explanation”

Bumper interim figures followed by an upbeat trading statement had already laid the ground for an outstanding annual performance.

In the event, the results RNS showed revenue up 31% and operating profit (before foreign-exchange gains and tax credits) up 38%. The figures were BVXP’s best ever, and extended the group’s run of substantial annual growth to seven years:

The full-year dividend also marched higher — up 20% — with the second interim payout up 19% to 31p per share. A bonus was the declaration of a special dividend of 40p per share — equivalent to more than £2m.

As promised within September’s trading update, BVXP did comment on its revenue “in more detail”.

Sales of the firm’s vitamin D antibody gained 24% to £2.75m, while the aggregate turnover of five other antibodies climbed around 30% to £2.1m.

“Our expectation was that, whilst test volumes are increasing globally, price pressure (i.e. $/test prices achieved) would balance the increase in volume leading to a relatively flat total market in US Dollars. This [customer] feedback set our expectations for royalties received after 30 June 2017 (but relating to the reporting period). Actual royalties received were in excess of these expectations.”

“This healthy increase in these [five] core antibodies that are sold to a number of customers in many countries does not have a single explanation over and above the 5-10% increase in the global diagnostics industry that is reported by third party analysts.”

However, one source that did help the group was currency movements:

“Our revenues continue to be dominated by US dollars and Euros. We have commented in recent reports on the effect of post Brexit referendum exchange rates on our revenues in the absence of any hedging mechanisms.”

I calculate BVXP’s GBP-denominated revenue may have benefitted by between 15% and 20% during the year. So perhaps the company’s underlying growth rate was between 10% and 15%.

(EDIT 18 Oct: I have revised my sums and now reckon the underlying growth rate was about 20%. Details in the Comment below.)

* Introducing the “education period” for troponin

Today’s RNS introduced some caution about the recent launch of BVXP’s tropronin antibody.

To recap, this particular product is supplied to Siemens and BVXP has said in the past that the antibody has the potential for “significant revenue”. Indeed, broker notes have suggested annual product sales could eventually reach £2m or more.

Anyway, Mr Harrison now admits the new troponin product will experience an “education period” before sales can really take off (my bold):

“The rate at which this new test will be adopted by Siemens customers in hospitals in the EU, Asia and elsewhere outside the US is unfortunately not something of which we have detailed knowledge.

Whilst it is clear that a quicker test will be of benefit to patients, clinicians and hospital budget holders, it is also clear that there is likely to be an education period during which clinicians become comfortable with a significant change in diagnostic practices that can result in non MI (i.e. patients not having a heart attack) being released from A&E much earlier.”

We will develop a better understanding of this matter during 2018.

While the mooted delay does not sound too worrying, there is another factor at play here.

You see, revenue from the troponin product has been expected to offset the disappearing revenue from another antibody….

Today’s results heralded a change of tone with regard to the replacement of revenue from a product named NT proBNP:

“The revenues resulting from the success of the Siemens troponin project will be important in replacing approximately £1 million of NT proBNP sales that will be lost from the 2017/18 accounts due to the termination of a specific technology license.”

The term “will be important’ does not sound as confident as past statements:

Back in March BVXP declared (my bold):

“Significant troponin revenues during the financial year 2017/2018 are expected to offset the loss of revenues of around £800,000 from another product due to the expiry of the relevant agreement.”

And this time last year BVXP said (my bold):

“Troponin remains an important product for Bioventix’s future performance as we expect to commence significant sales during the financial year 2017/2018 and we anticipate that this revenue will offset revenues of £0.7 million – £0.8 million from another product which will terminate during this period.”

What with the aforementioned “education period” for troponin and the revenue gap to fill rising from £0.8m to £1m, I get the impression 2018 may actually see revenue reverse, with perhaps a notable effect on profit.

Still, all is not lost just yet. Income from the company’s other antibodies continues to grow, while further progress is being made with deliveries to the group’s fledgling Chinese market.

* No more than £5m needed in the bank

In particular, the group’s operating margin has risen further into the stratosphere, while the exemplary return on average equity ratios continue to suggest the business runs on thin air:

I have no concerns with BVXP’s cash flow:

I calculate total capital expenditure has represented a microscopic 1.2% of BVXP’s aggregate operating profit during the last five years — and the £22k spent during 2017 was ludicrously tiny.

Meanwhile, BVXP’s working-capital movements are somewhat larger — although absorbing a total £2.5m during the last five years does not ring alarm bells for me when operating profit has jumped from £1.8m to £5.7m throughout the same period.

Mr Harrison said the business does not require more than £5m in the bank:

“Our current view is that a cash balance of approximately £5 million is sufficient to facilitate operational and strategic agility with respect to possible corporate or technological opportunities that could arise in the foreseeable future.”

With few demands on cash flow, I dare say this year’s £2m/40p per share special dividend will not be the company’s last.

“For the financial year 2017/18, our challenge will be to make up for the approximately £1 million of lost sales mentioned above with revenues from the newly launched Siemens troponin project and modest growth from additional vitamin D antibody sales and royalties.”

“Furthermore, we remain optimistic that further modest growth next year will come from additional vitamin D antibody sales and royalties.”

And the year before that he said (my bold):

“Furthermore, we remain optimistic that further modest growth in the next two years will come from additional vitamin D antibody sales and royalties.”

Both times, the “modest” growth turned into 20%-plus revenue and profit advances.

I just hope he is trying to under-promise and over-deliver once again.

Anyway, BVXP’s operating profit before foreign-exchange differences and tax credits was £5,685k for 2017, which after standard 19% tax gives earnings of about £4.6m or approximately 90p per share.

That multiple certainly looks racy, especially given the apparent caution expressed about the replacement of the disappearing NT proBNP income.

But the wonderful economics of this business — additional revenue all seems to fall to the bottom line while only 13 people are needed to run the operation — do make BVXP a very special company.

For now at least, I still have my fingers crossed that BVXP can continue to extract further growth from its vitamin D product and those five other antibodies… and that the recent Siemens troponin launch does not remain in an “education period” for too long.