Summary: This was another frustrating RNS from the specialist currency manager. The cost base has ‘inevitably’ increased, yet revenue and client numbers remain stagnant and — as usual — there’s no real sign of the business enjoying an upturn anytime soon. At least REC continues to generate cash, retains a robust cash pile and distributes a healthy dividend. The yield is 5%, which is not too bad in the current market. I continue to hold. 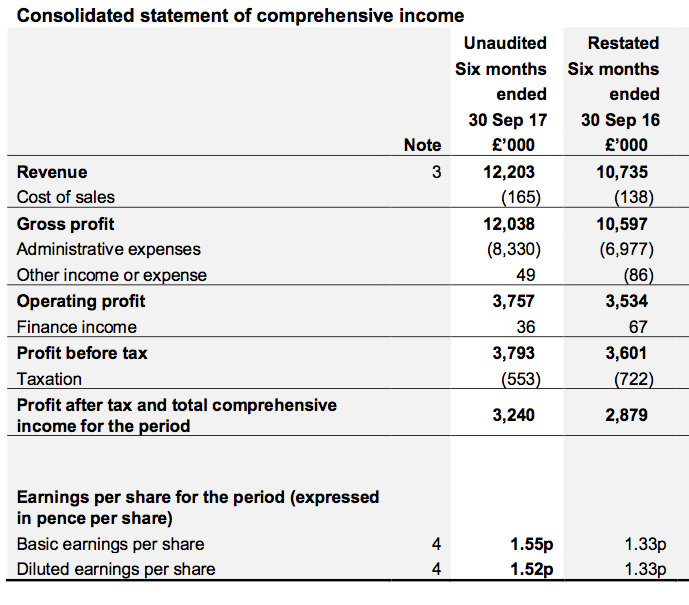 REC’s quarterly updates (Q1 and Q2) had already indicated these results would be a somewhat humdrum affair.

The updates had informed investors that effective client assets under management (AUMe) had bobbed around the $60bn/£46bn mark for six months, which left my sums predicting annual revenue running at £24m… and therefore half-year revenue at the actual £12m.

REC said first-half revenue and operating profit had gained 14% and 6% respectively on the comparable period of the year before.

However, that comparable period enjoyed only three months of a post-Brexit GBP, which has since boosted REC’s finances as the group’s revenue is predominantly paid in the now stronger USD.

A comparison with the preceding second half is more informative:

Here we see the latest H1 showing revenue down 5% and operating profit down 11% when compared to H2. It appears the growing cost base I mentioned when I studied June’s annual statement has started to emerge (see below).

REC’s typically long-winded narrative yielded very little on the prospect of the group winning new clients. The number of customers stayed at 59 during the six months and has increased by a net four since March 2015.

REC’s ten largest clients produced 76% of revenue during the half, and this client concentration — alongside the lack of fresh mandates and the growing cost base — remains very frustrating.

* “Such costs are an inevitable part of ensuring our continued innovation”

I included this chart within my June write-up: 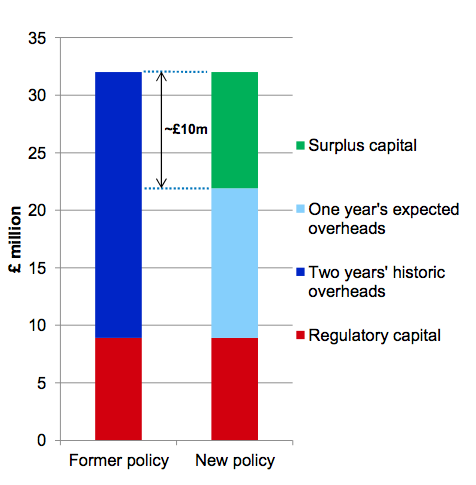 I wrote at the time:

“Squinting at the chart above, it appears one year’s expected overheads now come to £13m. Given REC said overheads for 2017 were £11.7m, I am disappointed additional costs still seem to be creeping into the business.”

My £13m overhead guess appears to have been confirmed.

Here is an extract from the H1 statement concerning costs: 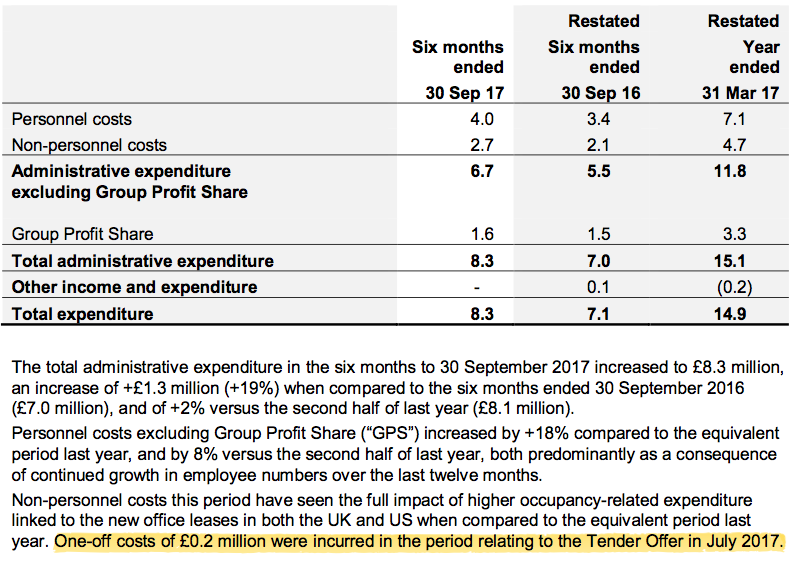 The costs are apparently inevitable (my bold):

“Additional resources required in operational, research and client-facing areas of the business have contributed to an increase in costs. Such costs are an inevitable part of ensuring our continued innovation and in maintaining the very highest levels of service for our clients in the longer-term.”

I just wish REC could inevitably expand its customer base and revenue to cover these inevitable extra charges.

(I should add that REC’s H1 operating margin was still a robust 31%, so perhaps it is unrealistic of me to expect further margin improvements.)

* I should have known they’d soon under-perform

REC published the following fee rates for each of its services:

I have calculated the fee rates myself, based on the average AUMe for each product category and the average £1:$1.29 exchange rate seen during the six months:

The differences may look small when compared to REC’s own figures, but they can create a sizeable effect on REC’s possible earnings.

Also, having trumpeted the fact that all of REC’s profit-seeking strategies had performed well during 2017, I should have known they’d soon be due a reversal:

At least the strategies are showing positive returns since their respective inceptions. But whether the size of those long-term returns — at less than 3% — can encourage new clients to sign up is another matter entirely.

* The underlying full-year dividend may advance only 5%

Little in the way of capital expenditure and working-capital movements meant the £3.7m operating profit was translated fully into cash and supported the payment of last year’s £2m special dividend.

Factor in regulatory capital of £8.9m and third-party investments of £4.8m, and I reckon ‘surplus’ cash could be £12.6m or 6.4p per share. The balance sheet continues to carry no debt and no pension obligations.

Note also that REC’s final dividend is likely to equal this £2.3m H1 payout (my bold):

“Changes were announced in the 2017 Annual Report in terms of the Board’s intention to pursue a progressive dividend policy, with dividends expected to be paid equally in respect of interim and final, subject to the financial performance of the business, the market conditions at the time and any excess capital assessed as required under the Group’s capital policy.”

At least further special dividends could be declared (my bold):

“Also as previously stated, the Board will also give consideration to returning at least part of any excess of current year earnings per share over ordinary dividends to shareholders, potentially in the form of special dividends, subject to the financial performance of the Group for the full year, the market conditions at the time and any increased capital requirements.”

Using my own fee-rate calculations and the latest AUMe numbers, I reckon potential management fees could now be running at £23.7m with £1 buying $1.32:

Overheads of £13m and the 30% employee profit share give a possible operating profit of £7.4m:

The P/E at 46p could therefore be about 15. Adjust for the ‘surplus’ cash and the rating drops to about 13.

The highlight of this stock remains the yield, which is 5% using the anticipated 2.3p per share ordinary dividend.

1 thought on “Record: Another Frustrating RNS That Leaves The Stock’s 5% Yield As The Main Highlight”