Summary: It took MTVW’s chief exec just 265 words to describe the group’s weakest first-half performance for four years. Still, the nature of this property-trading firm means earnings can be somewhat variable from time to time. What is important, though, is that net asset value improved once again to a fresh high while debt continues to be reduced to a new low. My sums point to a possible NAV of £209 per share based on the firm’s long-term margin. I continue to hold. 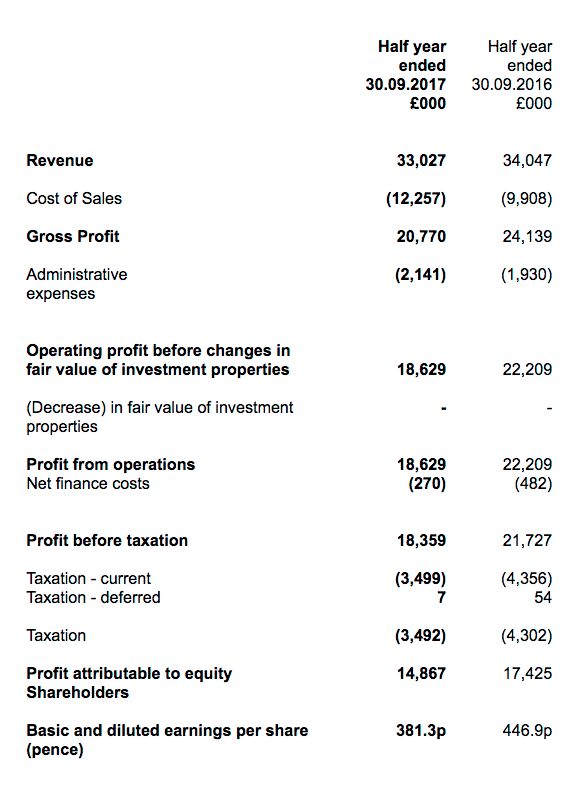 I was not expecting these results to reveal MTVW’s lowest first-half revenue and profit figures since November 2013.

The customary terse statement from chief exec Duncan Sinclair — this time all of 265 words — seemed to blame the performance on Brexit:

“I have written before of the uncertainties overshadowing the economic situation and until the bureaucrats in Brussels agree to meaningful negotiations with our government those uncertainties will remain.  Whilst this Company conducts its business entirely within the borders of the United Kingdom it cannot isolate itself from the macroeconomic situation.  It is against this background that, with the exception of net assets per share, the figures of Our Performance on the previous page are down.”

Perhaps the lower revenue and profit were simply due to the lower prices MTVW achieved from its property sales.

To recap, MTVW’s portfolio is dominated by 2,000 or so regulated-tenancy (or similar) properties, and the number of the group’s properties becoming available for sale — and the proceeds they generate — can be unpredictable.

You see, MTVW sells its properties only when the regulated tenancy ends — which most often occurs when the tenant dies.

Furthermore, the gain on each property sold — typically correlated to how long the property has been owned by MTVW — can vary somewhat as well.

Anyway, I suppose all that may have effected today’s results, too, and led to the 63% gross margin, also the lowest for four years.

For some perspective, a 63% gross margin is equivalent to MTVW selling a property for a 170% gain. The group enjoyed a 199% gain last year, and has earned an average 166% gain during the last ten years.

* Let’s hope these new London purchases are the “right properties”

“The Company remains financially sound with low gearing and has made good purchases during the six months ended 30 September 2017.”

I wrote in my review of MTVW’s 2017 results that group borrowings then stood at their lowest level since 2007.

These results showed net debt having reduced by a further £6m to £25m — now the lowest level since 2001.

Net debt of £25m equates to just 7% of the £346m book cost of MTVW’s trading-property estate. In the past this ratio has often topped 25%, which suggests MTVW could have the capacity to borrow another £60m.

Today’s RNS showed MTVW’s stock level decreasing by £913k during the half: 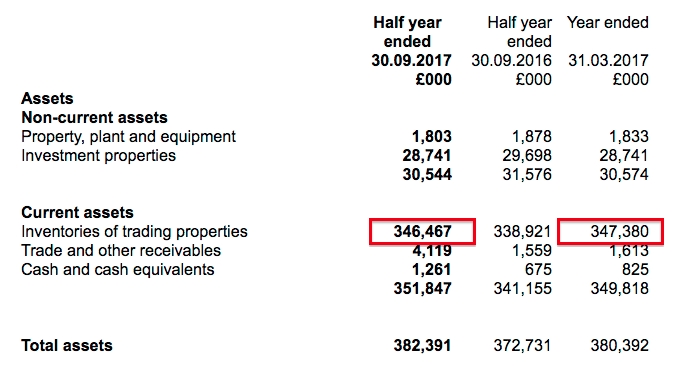 Mr Sinclair described the £12m or so spent on new properties during the half as “good purchases”, and he revealed the business has been spending much more during the last eight weeks (my bold):

“Since 30 September 2017 the Company has completed the purchase of more than 50 properties in the London area investing over £25 million.  As purchasing the right properties is the most important part of our business I believe that we have reasons for optimism.”

For comparison, I calculate MTVW spent £33m on additional properties during the whole of the last financial year.

I can only trust these recent London purchases are indeed the “right properties”.

* The non-election of a non-executive

It’s not often a chief executive’s statement kicks off with a paragraph about the non-election of a non-executive director:

Yet that was the case today with this MTVW RNS.

“At the Annual General Meeting held on 9 August 2017 those shareholders deemed to be independent exercised their right to reject the re-election of Mrs. M. L. Jarvis as an independent non-executive director.  At the General Meeting held in accordance with the UKLA Listing Rules on 13 November 2017, when all shareholders were entitled to vote, it was resolved to re-appoint Mrs. M. L. Jarvis as a director of the Company.  Thus the balance and stability of the Board is maintained.”

I am not 100% sure what has happened behind the scenes here, but I attended the 2014 AGM and it was clear certain members of the wider Sinclair family do not get on with each other.

In particular, Graham Murphy — whose wife Mrs M Murphy is the sister of chief exec Duncan Sinclair  — was quite vocal with his criticisms of how MTVW was managed.

The votes against the non-exec at the 2017 AGM represented 21% of the share count — the Murphy family owns at least 18%.

I may have got this completely wrong, but it seems to me the Murphy family voted against the non-exec resolution… perhaps because they wish to have a non-executive position on the board themselves.

This RNS revealed trading properties with a £346m book value, which could yield £922m if they were all sold at the average margin enjoyed during the last ten years.

Tax the resultant gain at 19% and then add on other freehold investments of £29m, and then subtract net debt of £25m and other liabilities of £3m, a possible net asset value (NAV) comes to £813m or £209 a share.

That £209 per share estimate compares to the aforementioned £89 per share NAV reported by MTVW on its usual historical-cost basis.

With the share price at £112, clearly there remains some upside potential here.

But as always, the great unknown is how long it will take MTVW to sell all of its properties to realise that potential £209 per share NAV guess.

This £666m valuation is becoming rather stale now, but for what it is worth, adjusting this valuation for tax, the investment properties and debt gives an NAV of £154 a share.

As a reminder, this £154 estimate is based on MTVW’s properties being in their current regulated-tenancy state — so does not include any upside potential for when the property is vacated and can be sold at market value.

And as before, this £154 estimate does not include any house-price gains experienced since the September 2014 assessment, and nor does it adjust for properties bought or sold thereafter.

Meanwhile, the interim dividend was held at 200p per share and leaves the full-year 300p per share payout to provide a 2.5% income.

PS: You can now receive my Blog posts through an occasional e-mail newsletter.