Summary: Last month’s statement concerning a review of CGS’s machining division had already braced me for worrying news. In the circumstances, this RNS was not too bad. Sure, the machining division has reported a loss and will cut back on certain projects. However, CGS’s main foundry operation appears to be performing very satisfactorily, with profit per tonne reaching a new high. I continue to hold. 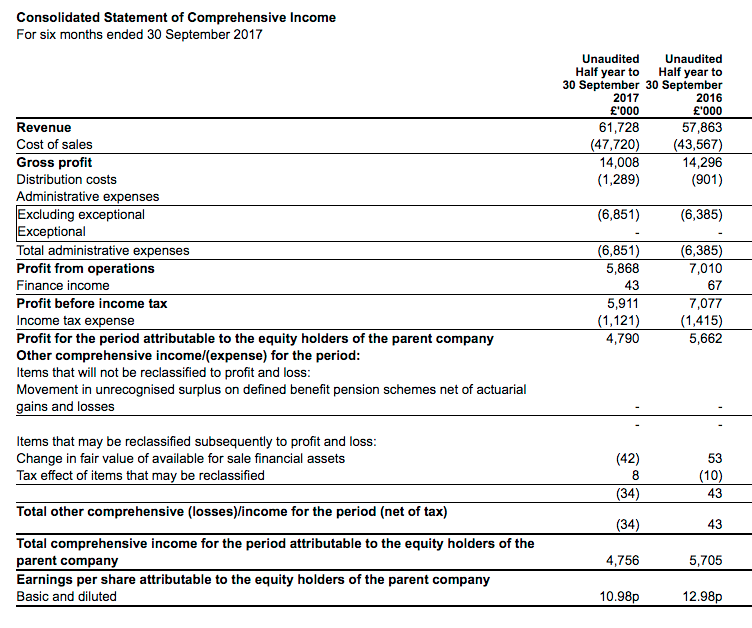 These results were not as bad as I had feared.

A statement last month announced that Adam Vicary, CGS’s chief exec, had assumed “operational responsibility” for the group’s machining division and that a full review of the department was underway.

The terse update sounded quite ominous, especially as the machining division had already reported a sharp profit setback within June’s annual results.

As it turns out, today’s news was not entirely awful.

True, the machining division reported a £1m first-half loss following charges for “stock obsolescence and the recoverability of tooling costs”. Revenue growth at the subsidiary will also be delayed following a decision to exit some projects.

However, CGS did claim the machining division would “return to an acceptable level of profitability” next year.

So things do appear under control.

The table below outlines the machining operation’s dramatic profit fall:

I was pleased CGS’s foundry division could deliver positive progress.

The table below shows H1 foundry profit having returned to the level seen during 2016, which was not a bad year for the division.

I also note profit-per-tonne-of-castings-sold is now running at  £322 a year — a new record for the foundry subsidiary.

The diverse divisional updates meant the group as a whole recorded total revenue up 7% and operating profit down 14%. Sadly, today’s RNS showed the worst overall H1 profit performance since 2011.

Not surprisingly, Mr Vicary decided to hold the interim dividend at 3.38p per share.

* Expenditure on an ‘automation programme’ and ‘core business customers’

The main attraction to CGS’s accounts continues to be the hefty cash pile.

Money in the bank at the half-year-end came to £25m, or 56p per share. The balance sheet carries no debt.

Cash flow absorbed a net £2m during the half following £7m spent on additional tangible assets.

I note capex has been running significantly higher than the associated depreciation charge for 18 months now.

However, the 2017 annual report did indicate most of the excess has related to additional land and buildings, so the large sums being spent do appear to be genuine ‘expansionary’ items.

The books continue to carry a pension-scheme surplus, which at the last count stood at almost £17m.

As I have mentioned before, the pension trustees have agreed to hand some of the scheme’s money back to CGS. It looks as if the amount to be returned has decreased to £6.6m (my bold):

“The pension schemes are related parties of the group and during the period £1,227,000 (2016 – £919,000) was paid by the group on behalf of the schemes in respect of pension payments and administration costs.

Quite why CGS continues to pay into the scheme at the same time the scheme is paying refunds to CGS remains a mystery to me that I am not inclined to investigate.

I am pleased CGS’s foundry division is currently trading as expected:

“Demand from our commercial vehicle customer base remains steady and therefore the full year result for the foundry operations is anticipated to be in line with market expectations.”

Assuming the machining division can return to breakeven, I reckon annual operating profit could be £14.6m. After deducting 19% standard UK tax, I arrive at earnings of £11.9m or 27.3p per share.

Then dividing that 374p per share by my 27.3p per share EPS guess gives a multiple of close to 14. That rating does not look an obvious bargain to me.