Summary: These figures from the recruitment software developer were never going to be great. The overriding theme of the last three years — greater marketing and product investment — once again hit earnings and will continue to do so throughout 2018. The statement talked of some client-fee reductions, too. Still, at least overall revenue and the hefty cash position have both advanced to new all-time highs. Exactly when a profit revival will occur remains anyone’s guess — but I am hopeful the chief exec/71% shareholder will one day oversee a recovery. I continue to hold. 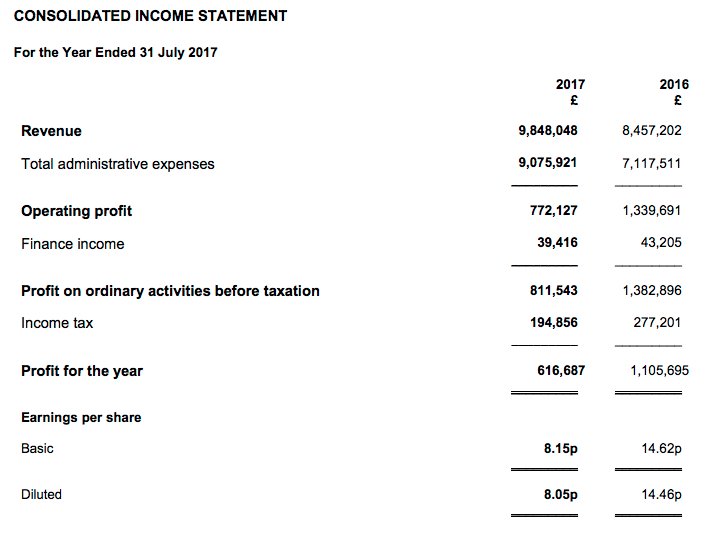 April’s first-half figures had already prepared me for bad news for 2017 and 2018 earnings.

WOR claimed investment in marketing, product development and customer support had underpinned the top-line improvement. However, the group also admitted such progress came with extra costs — which caused operating profit to drop 42%.

WOR chief exec Charles Hipps first warned shareholders of this investment push three years ago. Back then he said:

“These investments are made to sustain and build upon our current position and are aimed at driving future growth.  At the same time the increased scale of some projects make growth less predictable and more erratic which taken together with our commitment to invest for the future may impact on profitability in the short term.”

The table below shows the “impact on profitability in the short term”:

WOR’s 2017 profitability was the group’s lowest since 2010. I have to confess, I did not anticipate profit falling so far three years ago.

But look at the lowly H2 profit. April’s interims did warn of the company operating at a loss during the early H2 months.

I should add that the annual dividend has been maintained at 3.5p per share for the twelfth year.

* I bet WOR has once again pitched a lower fee

WOR’s interims said 2018 would experience a “material adverse impact” and yesterday’s statement confirmed that remains the case (my bold):

“[…] Lower than expected sales in the last financial year and ongoing sales challenges, high investments, known reductions in revenues from the existing client base, general economic uncertainty and a competitive market will make this a very challenging year in which, inevitably, we expect to see a further significant fall in profits.”

I note the term “known reductions in revenue from the existing client base”.

The HMRC contract is up for renewal in early 2018 and I dare say WOR has again pitched a lower fee to keep the business.

The monthly spreadsheets HMRC publishes  should tell me whether WOR’s fees have been hit before the next results in May.

* Why the dividend is low and cash is high

The year-end cash position came to £11.6m,  or 153p per share, and is equivalent to two-thirds of the market cap. The balance sheet carries no debt and no pension obligations.

Cash conversion during the year was satisfactory, with another useful inflow of working-capital cash:

The favourable working-capital movement was probably due to customers paying upfront to use WOR’s software. The annual report will provide details of such ‘deferred income’, which in turn can perhaps indicate the level of potential revenue for 2018.

I am also pleased WOR’s expenditure on tangible assets remains modest and that the business continues to write off all development spend as incurred.

Elsewhere in the accounts, the cost of the extra investment has left some key ratios looking rather sorry:

With second-half earnings at a very depressed level and no sign of any improvement until 2019 at the earliest, gauging WOR’s valuation is not straightforward.

The only real yardstick is the £11.6m cash position, which adjusting for upfront customer payments is probably about £10m. With the market cap at £18m, the underlying business could arguably be valued at £8m.

Set against the £772k operating profit just reported, that £8m valuation does not appear to be an obvious bargain.

The hope is, of course, that WOR’s investment in marketing and so on pays off, and that revenue continues to advance and profitability in time rebounds to previous heights.

My earlier WOR write-ups consistently hoped for a profit revival — I had been expecting 2014’s peak 25p per share earnings to return by 2020 — but that projection presently looks hopelessly optimistic.

I reckon it could now be 2022 before WOR recovers back to margins of 20%-plus and an annual profit beyond £2m.

In the meantime, I will just have to trust the aforementioned Mr Hipps — who controls about 71% of the business — and the hefty investment programme can eventually deliver this sort of promise (my bold):

“Strong technology and an exciting product pipeline; positive and growing client satisfaction; and an experienced team provide a great foundation for ongoing success.”

5 thoughts on “World Careers Network: FY 2017 Figures Show Revenue And Cash At All-Time Highs, But Earnings Will Remain Depressed Until At Least 2019”