Summary: Oh dear — my portfolio suffers yet another profit warning! WOR had already owned up to lower earnings this year, but now it has admitted to further cost increases for 2016. Nonetheless, these annual results revealed an improved second half while net cash currently equates to half of the present market cap. Bear in mind, too, that the last time this software developer invested at the expense of near-term earnings, profit eventually quadrupled. I continue to hold. 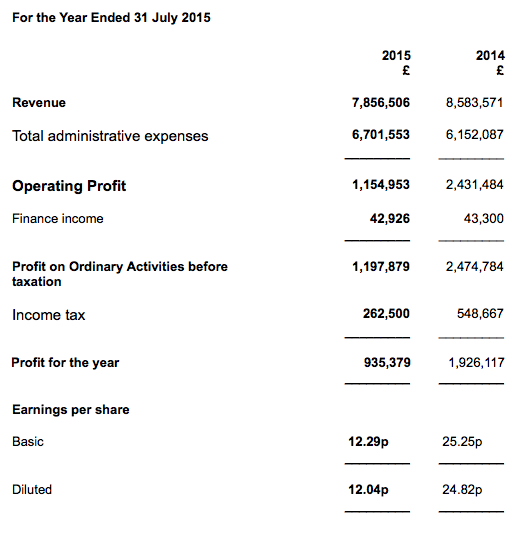 * The results were a little better than I had expected

A bombshell-set of interim results during April had already admitted these full-year results would not be great.

In the end, annual revenue dropped 9% and operating profit collapsed 53% as WOR collected lower fees from a major customer and lifted expenditure on system development, product marketing and overseas expansion.

Still, I was encouraged by the second-half performance:

New contracts involving “a number of large-scale client projects” helped the H2 top-line advance on H1, and match the H2 top-line of the previous year. H2 profit was well ahead of H1 profit, too.

The chairman’s latest statement owned up to rising costs extending into 2016 (my bold):

“Inevitably it will take some time for our investments to generate a meaningful return and for the coming year, we expect to see a continued and significant reduction in profitability as the full year impact of last year’s cost increases and the further investments we are currently making impact upon the business.”

These investments are being made to “provide a sound basis for the long-term future of the business”.

Just how large the annual cost base will become is hard to say, but doubling up the expenses recorded during H2 suggests at least £7m. That does not leave much room for profit if revenue stays at £7.9m.

Mind you, WOR has been here before. Back in 2009, the chairman reported operating profit had fallen 34% to £663k… yet was keen to continue further product development:

“We believe it is important to continue to invest in ongoing product development and to maintain our high levels of service to our clients despite the difficult economic conditions. As a result of this ongoing investment, coupled with declining business activity, it appears inevitable that sales and profits will fall further in the coming year.”

All told, I will gladly take another year of greater development costs… if the end result is another quadrupling of profit!

WOR’s accounts remain very conservative. All development expenditure is charged through the income statement while the balance sheet continues to carry plenty of cash and no debt.

Cash conversion during the last few years has been good, with relatively little spent on fixed assets or absorbed into working capital:

The latest £8.2m cash position is equivalent to 109p per share — or about half the current 220p offer price. I have to say, I  do wonder if some of that cash could be used to enhance the stingy annual dividend — which has been stuck at 3.5p per share since 2006.

With current-year costs set to rise and perhaps knock profit even lower, it is difficult to judge WOR’s immediate valuation.

That valuation does not look expensive, but I originally bought on a supposed cash-adjusted P/E of 8  — only to now find myself 50% down on my investment :-( That suggests a greater margin of safety is required before I consider buying again!