Summary: These results were never going to show a major turnaround, but glimmers of hope continue to emerge at the geoscience software specialist. In particular, a new chief exec has cut costs, reorganised the firm and spotlighted some of the company’s product attractions. True, minimal earnings are likely during the short term. But with the upbeat stock market making obvious buying opportunities hard to find, I am beginning to warm to GTC’s recovery potential. I continue to hold. 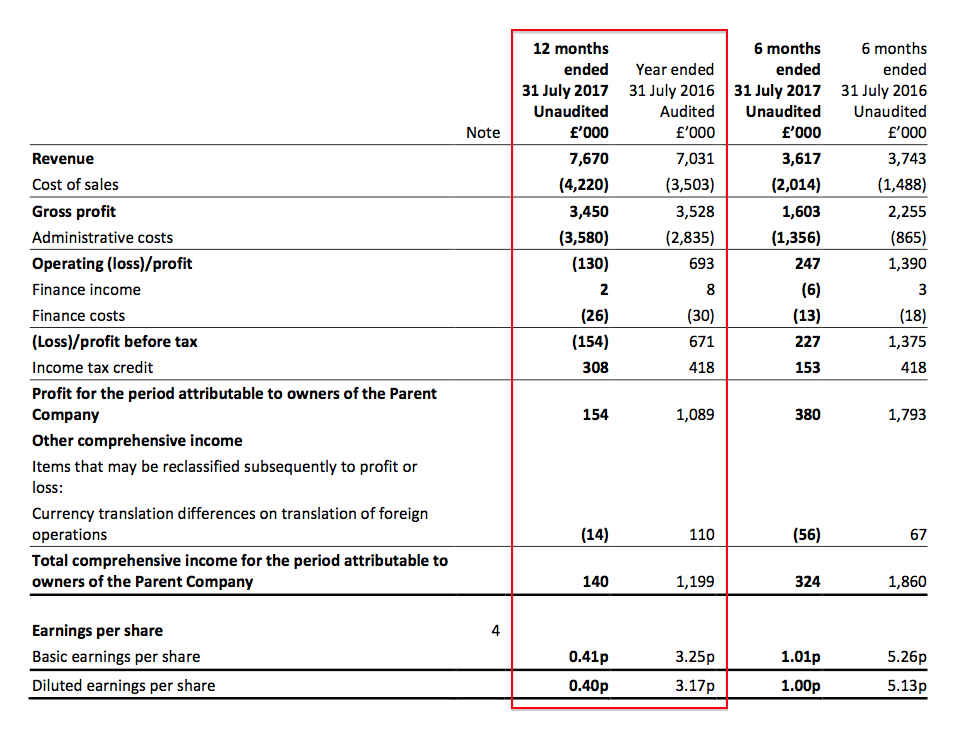 * I was pleasantly surprised to read about a “more buoyant market“

A rather unremarkable set of interims followed by a mixed trading statement had already confirmed a major turnaround at GTC had not occurred during 2017.

The fortunes of the business remain some way off its 2013 heyday:

I should add that GTC’s progress during 2017 was inflated by the full-year contribution of a 2016 acquisition. Had GTC owned the acquisition throughout both years, these 2017 results would have shown revenue dropping from £9.1m, or 15%, to £7.7m.

The management narrative described various ups and downs within the group.

I was pleasantly surprised to read that the Products division, which develops and sells geoscience data and software, had apparently enjoyed “a more buoyant market”.

Following the awful H1 of 2016, I am somewhat relieved the business has managed to scrape a profit for the subsequent 18 months.

GTC’s profitability has been sustained by its new chief exec reducing the group’s costs (mostly by  making redundancies).

My half-year write-up noted the introduction of a welcome new cost-base table and this annual statement provided an updated version: 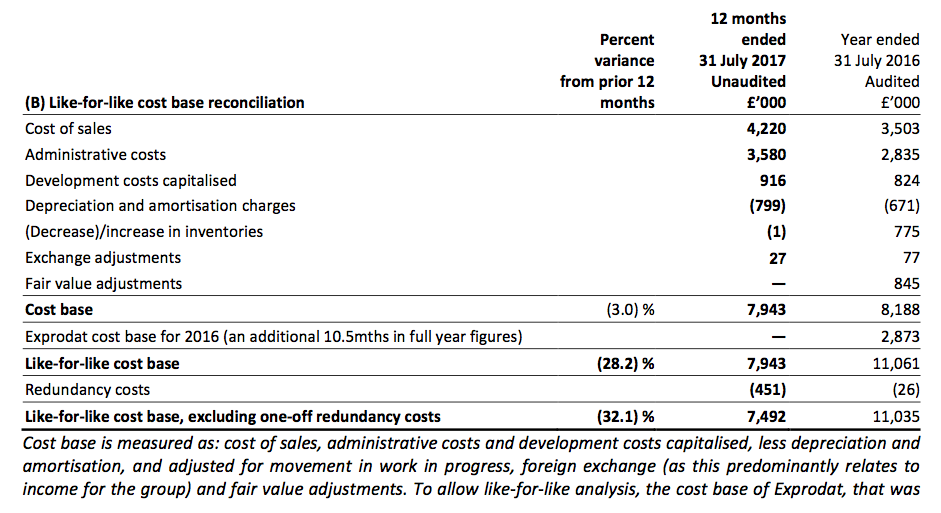 I derived the following table using GTC’s definition of its like-for-like cost base, excluding redundancy costs:

* These remarks suggest the business may not be broken

Past GTC reports have never really outlined the importance of the firm’s products to its customers, and so I applaud the new chief exec spotlighting such attributes.

Here are some choice quotes from the RNS (my bold):

“At the heart of our product offerings lie our market-leading inventory of Gravity & Magnetic data. Sales of these data were strong – it being an essential and cost-effective component of the integrated campaigns of our oil & gas customers, and a core operational tool for the mining industry.”

“Customer feedback on Globe Phase Two’s new content and delivery enhancements has been strong and through a new programme of training and practical support we are seeing our userbase expand as the product becomes more central to our customers’ daily workflow.”

“The re-subscription rate across all the software products maintained 2016 levels at above 95%, and our install-base grew further – driven by new sales (14% overall customer increase) and by customers with Global licenses deploying the software more widely within their organisations.”

True, these quotes relate only to one division. But the remarks do suggest GTC’s business is not completely broken.

* Tardy payments would have added almost £1m to the cash position

There’s not a lot to say about GTC’s finances.

The trading downturn has meant various ratios have slumped to mediocre levels:

Cash generation during 2017 was not great, although the £700k working-capital outflow was due to tardy customer payments of £985k that have since been received:

Such expenditure now occurs every year at this business, and what with the amounts also included within the aforementioned cost-base table, I do wonder why they are not written off as expensed through the income statement.

It goes without saying that the capitalised expenditure is invariably larger than the associated amortisation charge that is used to calculate reported earnings.

At least year-end cash was £1.7m, which after debt of £0.8m and plus those tardy payments would have given an adjusted net cash position of £1.9m or 5.1p per share.

Furthermore, the balance sheet carries the group’s freehold headquarters at a £2.4m (6.6p per share) book value and is also free of pension obligations.

I wrote in April that I felt the worst had been and gone at GTC.

I think these results underline that view, and confirm the business has stabilised somewhat following some decisive cost cutting.

Certainly the Products division appears to be where any future excitement is most likely to lie. The immediate outlook here seems relatively promising (my bold):

“From this starting point, we are better positioned to capture opportunities as green shoots emerge around oil and gas exploration spending, and we take cautious encouragement from recent trading.

Following the period under review, we have seen a continuation of 2017’s buoyant market for data, and we have a strong pipeline of pre-funded work. At the core of this are subscriptions to Globe 2018.”

Right now, I think it is fair to project a near-term annual operating profit of no more than £500k. Combine that with the net £1.9m cash position and the current £9m market cap is probably about right.

That said, the share price could be a bargain longer term if the leaner cost base plus greater client activity can one day combine to regain the high margins of yesteryear.

I have to confess, I have previously described GTC as a “debatable” portfolio holding due to its haphazard track record and absence of stable leadership.

But with obvious buying opportunities hard to find in the current market, I am now beginning to warm to GTC’s potential recovery upside.

A lowly share price, that decisive cost-cutting, the cash position and some “market-leading” products is enough for me to conduct some further research.