Summary: These figures were better than I had expected, not least because WOR enjoyed the benefits of the weaker post-Brexit pound. However, the software developer did warn that costs would continue to rise — which in turn would keep a lid on earnings for the “foreseeable future”. At least revenue is marching higher while the weaker pound ought to help the group’s progress in the States. The accounts remain simple and flush with cash, and you could argue the underlying P/E is just 5. I continue to hold. 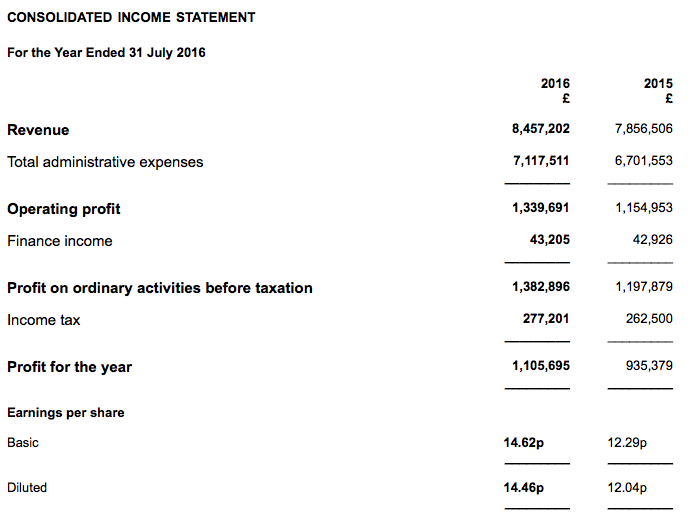 I was not anticipating too much excitement from this statement, not least because April’s interim results had already signalled WOR’s full-year profit would be “broadly in line” with that recorded during 2015.

In the event, revenue gained 8% to help operating profit climb 16%.

However, WOR was very keen to point out that the weaker post-Brexit pound had added £187k to annual revenue and more than £400k to annual profit.

WOR claimed its full-year profit would have been nearly 20% down on 2015 had the pound not declined.

The lower earnings were caused by greater expenditure on marketing, product development and service delivery — expenditure WOR has now been warning about for the last 18 months or so.

At least full-year revenue advanced 5% excluding the Brexit effect, which was not a bad performance when HMRC — one of WOR’s largest customers — reduced its payments by an estimated 36%.

The annual dividend was held at 3.5p per share for the eleventh consecutive year. The payout is stingy compared to earnings, but at least it is consistent.

Here’s my guess from April about how the second-half would look:

This is how H2 actually looked:

And this is how I think H2 would have looked if there was no Brexit boost.

(*estimates based on WOR’s Brexit remarks)

I suspect WOR will continue to benefit from the lower pound during 2017, although perhaps not to the extent it did during H2. For 2015, WOR earned 28% of its revenue from the United States and the forthcoming annual report should confirm the percentage for 2016.

In particular, cash conversion is superb:

During the last five years, WOR’s total expenditure on tangible assets has been matched exactly by the depreciation charged against earnings. (Moreover, this business does not capitalise any development spend — it is all written off as incurred.)

In addition, 2016 witnessed a very favourable working-capital movement that offset the outflows of previous years. It means that, since 2012, WOR has seen a net aggregate inflow of working-capital cash — a very commendable achievement.

As a result of the cash generation, WOR’s bank balance has climbed steadily and now surpasses £10m. The balance sheet continues to carry no debt and no pension obligations.

Elsewhere in the numbers, WOR’s operating margin does not look all that bad — despite the current phase of greater costs:

Meanwhile, returns on average equity are off the scale if you strip out the cash pile.

WOR effectively runs on negative operational assets due to large sums of deferred income — upfront customer payments that are accounted for as liabilities: 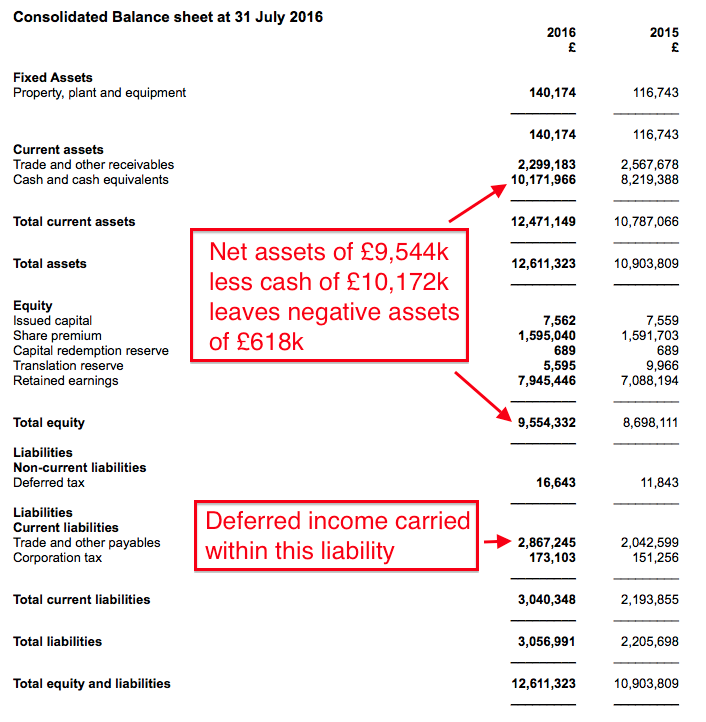 Such upfront payments are the type of funding all businesses would love to enjoy.

The cash-adjusted P/E on that EPS calculation is 7.2.

Either way, the shares do not appear expensive — although WOR’s lowly rating has been stubbornly maintained throughout all of 2015 and 2016.

Looking ahead, WOR did not suggest an imminent return to profit growth (my bold):

“The heavy investments in the second half of last year in the areas I mentioned above have continued into the current year and our cost base is now running considerably higher than last year.

These investments will undoubtedly have a material impact on our profitability both in the current year and for the foreseeable future since the increased costs come first and are more certain than the resulting revenue streams.  This is exacerbated both by the increased scale of some of our projects making growth more erratic and by the general economic uncertainty following the Brexit vote.”

But as I have written in the past, WOR has invested in product development at the expense of short-term profit before — and the subsequent pay-off was very handsome indeed.

I have my fingers crossed that the same can happen again.