Summary: A change of year end, various exceptional items, the effect of an acquisition and the company’s own ‘cost base’ definition meant studying these numbers was not straightforward. However, it was clear the geoscience software specialist has returned to profit, while it was also obvious the new boss remains confident about the group’s competitive attractions. Looking ahead, I am still hoping some encouraging revenue talk alongside tight cost controls could one day lead to much higher earnings and decent share-price upside. I continue to hold. 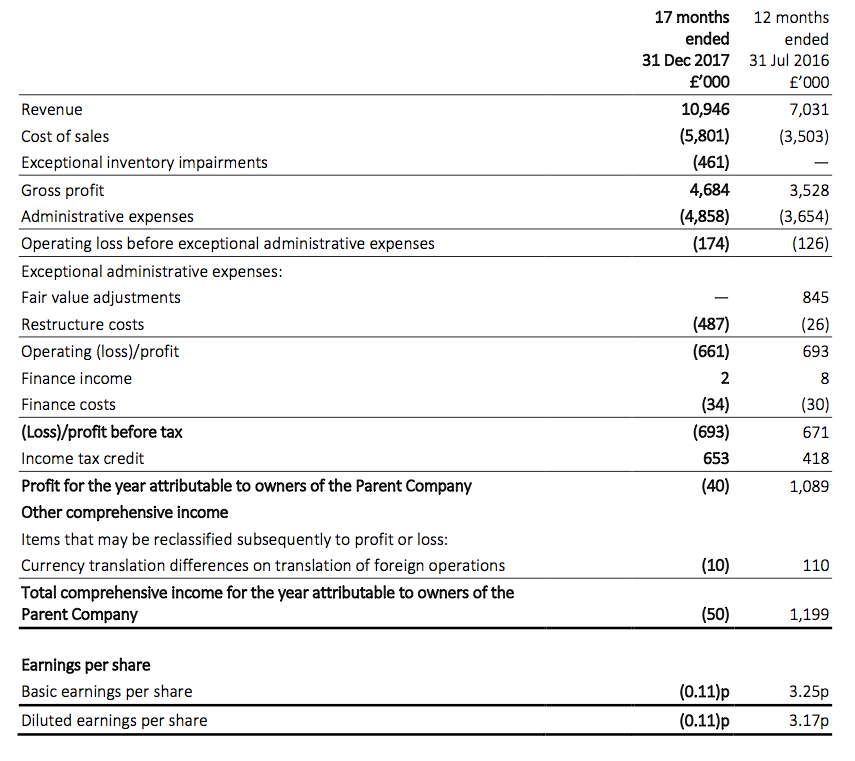 This peculiar 17-month reporting period was always going to involve a fair bit of number crunching.

Thankfully October’s twelve-month figures and February’s trading update meant many of the important numbers would come as no surprise.

However, the top-line comparison was flattered by the 2016 purchase of Exprodat, which brought in extra sales of £2m. Adjust for the acquisition and I calculate like-for-like revenue dropped 15%.

Importantly, GTC returned to profit following the 2016 loss. My earlier sums had projected a £300k annual profit run-rate, although I’m now guessing the figure is in the region of £229k.

The cost-base entries have been derived from this very helpful GTC analysis: 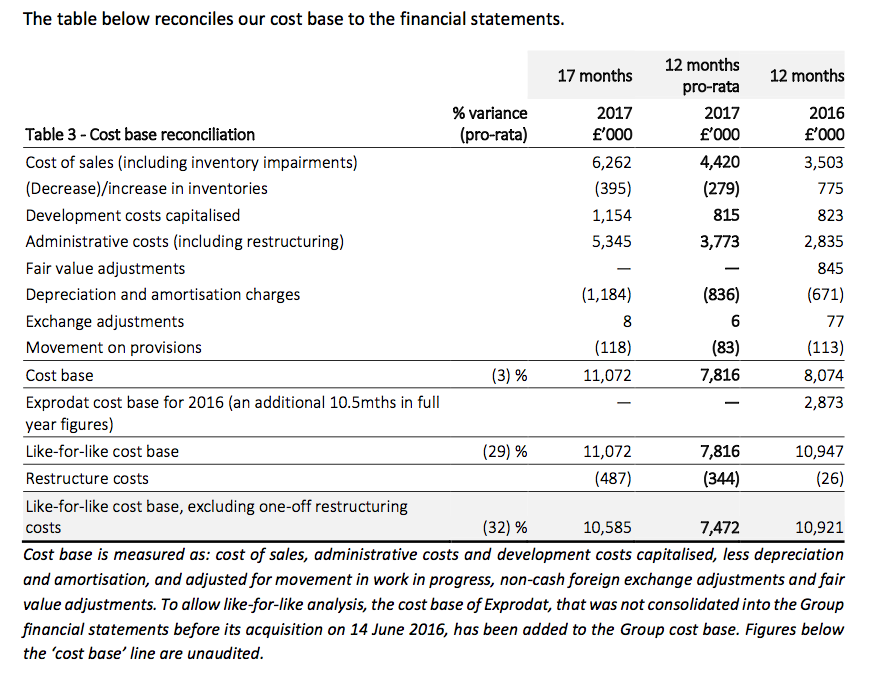 On a 17-month basis, operating profit was £287k while revenue less the cost base was £361k (the difference being due to how various cash movements are reflected as accounting charges). Taking the average of the two and pro-rata to twelve months gives £229k.

What is clear from all of the 2017 numbers is that GTC remains some way off its 2013 profit heyday:

GTC’s chairman described the 17 months as having witnessed “a wide-ranging programme of commercial, operational and cultural change”.

In fact, it has become quite obvious that the group’s chief exec — appointed mid-2016 — has brought with him a more shareholder-focused approach.

Certainly GTC’s statements are now far more informative under the new regime, and the latest narrative once again included a few encouraging snippets (my bold):

“At the heart of our Products division lies our inventory of technical data assets. Central to this are our holdings of Gravity & Magnetic data – the global coverage of which is multiple times larger than our closest peer.”

“These data are an essential and cost-effective component of the integrated campaigns of our natural resources customers — both in oil & gas and mining.”

“With the re-subscription rate exceeding 95% for the second year in a row, our install-base also grew — this driven by new customer wins (our customer list expanding by 23%) and existing customers deploying the software more widely within their organisations.”

The above snippets all cover the Products division, which remains GTC’s largest and most profitable department:

Product revenue apparently advanced 24% pro-rata, which I have to admit was very pleasantly surprising. Such an improvement suggests GTC’s oil-industry customers may now be emerging from their two-year hibernation.

Overall, the results commentary re-emphasised to me that there is still a decent business here — albeit one that is currently obscured by a weak Services division and wider client activity that remains well below its peak.

* Useful titbits about tax credits and a possible freehold disposal

However, the figures did show a healthy working-capital movement after October’s 12-month statement owned up to a customer being late paying a near-£1m bill:

(GTC’s year-end change may lead to less dramatic fluctuations to debtor and creditor levels — see my Comment below).

Something else worth noting is the relationship between cash capital expenditure and the aggregate depreciation and amortisation charge.

For this 17-month period, the figures matched closely. But further inspection of the accounting small-print (see my Comment below) shows £1,154k spent on development costs while the relevant amortisation charge came in at £494k. The £660k difference is substantial for GTC’s size, and may one day filter through to the main accounts.

(As the new boss is happy to show all of the intangible expenditure within that cost-base table, I do wonder why such items are not expensed entirely through the income statement as well.)

Although GTC’s main numbers had already been highlighted within earlier statements, this 17-month update did reveal two useful financial titbits.

First, some positive news about tax.

“We are examining all options regarding our Kitson House office in Leeds.”

I am not surprised by this remark. I asked GTC’s new boss about the freehold in November and he suggested it would be “looked at”.

This RNS says the property was purchased during 2006 for £2.5m, although the 2007 annual report says the cost was £2.8m (the difference probably being the associated purchase expenses). The asset is presently in the books at £2.4m (6.5p per share).

Owning this freehold looks an extravagance to me given the group’s size and recent financial history.

I trust the property can soon be sold to clear the group’s £634k borrowings and bolster the £2,393k cash position. I should add GTC remains free of any pension obligations.

“It remains early in the year, but our sales pipeline has the potential to exceed 2017 levels. This reflects a Q1 upturn in data sales for frontier regions, and continued growth in the user-base for our software and information products.

This strategic formula has already helped us to cross-sell our products and services, enter new sectors, and access rich seams of new data with significant 2018 revenue potential.

Net of our revenue sharing agreement with the Sierra Leone Government, a single licensing of this dataset has the potential to be a disclosable event for the Getech Group.

“We have begun 2018 by backing our growth ambitions with targeted operational, sales and marketing investment. We do not however anticipate significant upward pressure on FY costs.”

“By broadly maintaining this cost and tax structure, a similar pro rata sales performance… would generate a cash inflow of approximately £0.5 million (post-investment and debt repayments).”

“With c85% of our cost base fixed, each 10% increase in revenue would broadly translate to a £0.6 million increase in free cash flow.”

That final remark is informative, as it suggests an extra £1.1m of revenue would produce additional free cash flow at a margin of more than 50%. So it may not take too much extra Product revenue to see a notable operating improvement.

That said, I would not value GTC on its cited cash flow projections because they do include the aforementioned net inflows from the tax authorities. For what it is worth, I am hoping the business can earn a ‘clean’ £200k to £300k operating profit for 2018 — with my fingers crossed for some upside should extra revenue actually arrive.

Factor in my profit guess, the £1.8m net cash position, the £2.4m freehold and a bit of extra tax money, and the current £11m market cap probably looks about right for now.

Nevertheless, I am hopeful the share price will prove to be a bargain for the longer term — assuming additional revenue does arrive one day and translates into much greater earnings.

No trolls. No memes.
Enjoy a higher standard of investment discussion at Quidisq.
Join today