Summary: Oh dear… you know you have a ‘debatable’ holding in your portfolio when the highlight of a results statement is an 18% reduction to the workforce. That sadly is the case with GTC, as the geoscience data specialist has slashed its cost base and now hunts for income sources away from its cash-strapped oil clients. These H1 numbers were otherwise quite unremarkable, although the new boss has issued a few glimmers of hope for some sort of turnaround. I continue to hold. 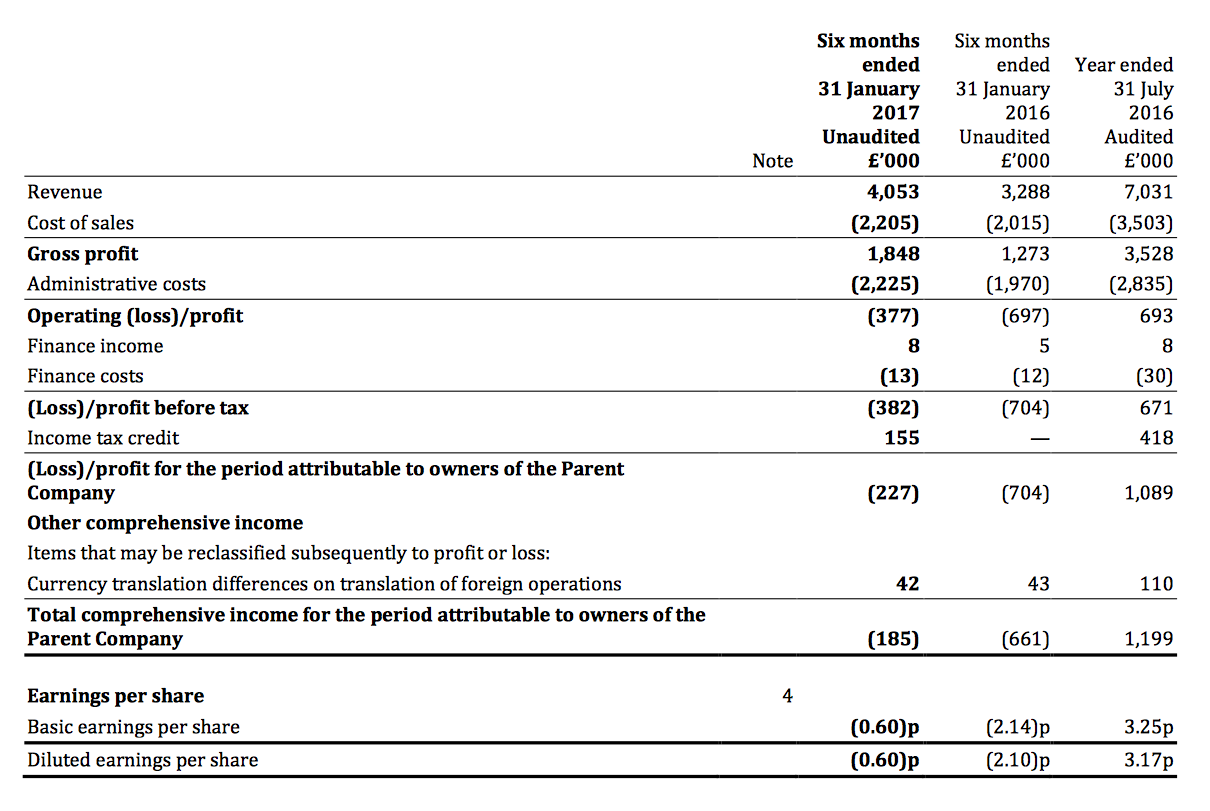 * I was wise not to expect a miracle

Although I was not expecting a miracle from these results, I had hoped GTC could extend the return to profitability it enjoyed during the preceding second half.

In the event, an underlying profit was scored during this first half — but only just.

The headline performance appeared somewhat healthier than the corresponding achievement of the prior year.

Mind you, these GTC figures were bolstered by a recent acquisition while last year’s H1 was particularly awful.

A more useful comparison is with the second half of last year, which showed a £571k profit:

In years gone by, GTC has tended to make most of its money during the second half, and I am hopeful that will be the case again for 2017.

As my previous write-ups have indicated, GTC has suffered badly during the last year or two after many oil clients stopped buying the group’s geoscience data.

As such, I’m pleased the newly appointed chief exec has initiated what appears to be a decisive shift into fresh markets (my bold):

“Our goal is to build out from our core upstream oil and gas market to become a leading solutions provider to the wider natural resources industry.

We are targeting an expanded customer base that invests billions of dollars each year making decisions that are ‘geographic’ in nature and which require specialised analytical skills and tools, to solve problems that involve highly complex spatial data.

We believe that key to unlocking this potential is the use of our world-class expertise within geographic information systems (GIS) and our relationships in this sector. These skills and relationships were significantly enhanced through the acquisition of Exprodat in June 2016. Capturing this opportunity has transformational potential.”

Whether the changes actually prove to be “transformational” is of course another matter.

Nevertheless, other snippets from the results narrative underlined some of the attractions of GTC’s existing oil-data products (my bold):

“Our 2017 Regional Reports are our most data-rich studies to date, and we continue to monetise our industry-leading Gravity and Magnetics database through sales to both the oil and gas and mining sectors.”

“Across all of these activities, our vision is to use our software, spatial data and GIS expertise to not only leverage the Group’s historic investment but also to build on our baseload of repeat revenues.”

During GTC’s heyday, these oil-data products could produce an operating margin of 20% or more.

* 18% of the workforce has been fired

It is quite unusual for a company’s results to include a “reconciliation of cost base” table… and it is even more unusual when this table is the most interesting feature of the statement.

Yet (sadly) that was the case with these GTC numbers.

The aforementioned shift into different markets has involved reducing the headcount by 18%, and GTC kindly presented a like-for-like picture of its expenses: 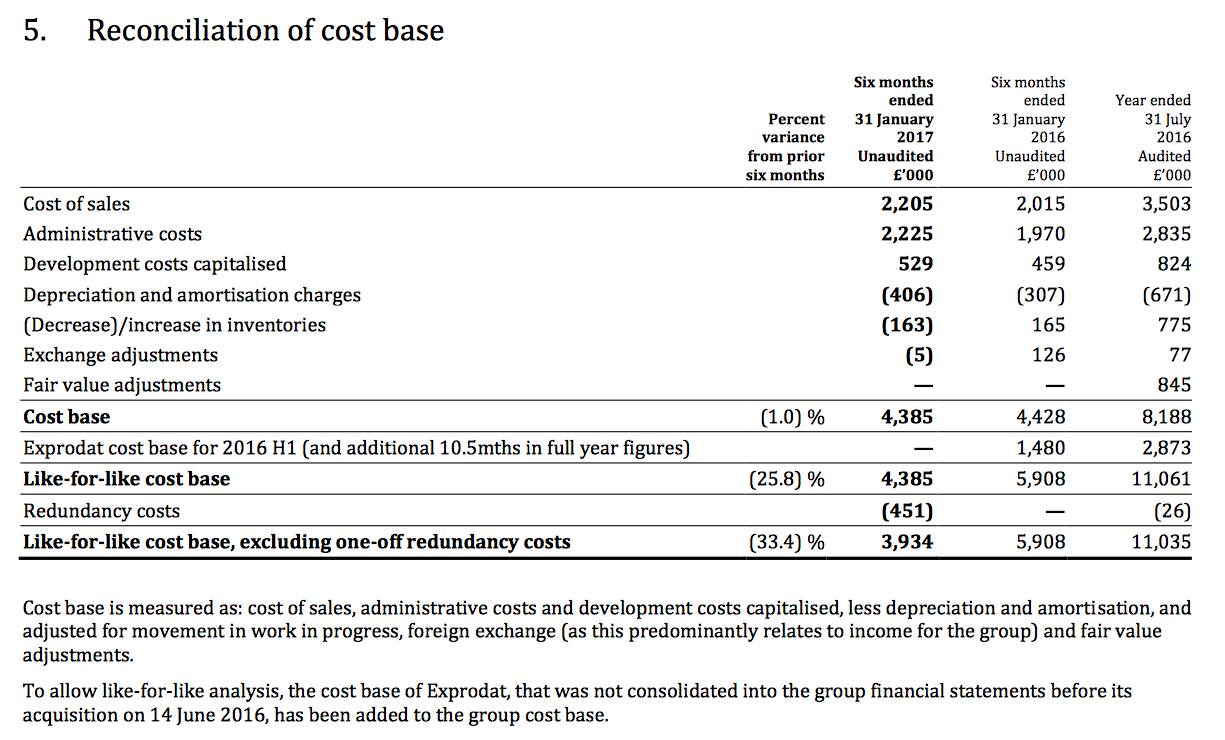 The like-for-like cost base for the preceding H2 was £5,127k, so this H1’s cost base of £3,934k does give some hope that a better level of profit can emerge should revenue improve.

I made the point when I reviewed November’s annual figures that GTC’s accounts contained a few niggles.

I wrote back in November that I had expected the group’s hefty intangible expenditure — which is not charged against profit but instead travels directly to the balance sheet — to reduce substantially from 2017.

I do not mind companies capitalising certain expenditure, just as long as the associated amortisation is adequate and reported profit is not boosted artificially.

However, GTC’s reported profit has been flattered in the past by this accounting practice — and sadly these H1 numbers extended the trend.

I am also puzzled about GTC’s stock levels, which November’s annual results admitted had surged by £775k to £1,067k.

At the time, GTC suggested the movement was more of a timing issue than a backlog of unsold products.

However, these H1 accounts show stock levels reducing only slightly to £904k.  So I wonder now whether the group’s new reports are taking longer to develop or longer to sell.

For now at least, cash levels appear adequate. A £480k tax refund helped shore up the net cash position at £1.4m (3.7p per share) after adjusting for a £400k earn-out payment owed to the former owners of an acquisition.

The balance sheet continues to carry freehold property with a £2.5m (6.6p per share) book value, too.

* A handful of positives to support a recovery

The management narrative contained a few lines of hope for shareholders (my bold):

“Any material recovery in discretionary exploration spending is likely to be a slow build. We do however take some cautious encouragement from recent trading.

Since 31 January 2017, our software and data sales have continued to grow. In March 2017, we signed an agreement with the OGA for them to license our UK MultiSat data across the North Sea. This is the third sale of our products and services to the OGA during FY 2017.

In parallel, the services market has shown signs of gradual improvement.”

At what point any of this eventually translates into a proper recovery unfortunately remains anyone’s guess.

* Famous last words, but I do think the worst has been and gone

I noted in my Q1 review that GTC was one of my “debatable” holdings, what with the firm lacking proven management and a resilient operating history.

These results have not changed that verdict and, if anything, have underlined the difference in quality between the group and other companies in my portfolio.

In fact, I am not tempted to study GTC’s valuation and I won’t consider buying any more shares — and I must admit I do wonder whether I should remain an investor at all.

However, for now at least, the business still enjoys net cash and continues to provide a range of specialist data that boasts some recurring revenue. I also like the fact the new boss is not afraid of making tough decision after firing 18% of the workforce.

There are glimmers of a revenue turnaround, too, and you never know, maybe the leaner cost base plus greater client activity can one day combine to regain the high margins of yesteryear.

Famous last words, but I do have the impression the worst at GTC has been and gone.

Nevertheless, I still recognise that my money may be better served in other businesses with greater tenured management and more reliable track records.

2 thoughts on “Getech: Oh Dear… The Only H1 Highlight I Could Find Was The 18% Reduction To The Workforce”