Summary: The latest RNS from this antibody developer contained yet more bumper figures, and showcased impressive all-round growth and a record H1 operating margin of 79%. One startling achievement was that the extra £754k of revenue brought with it additional administrative expenses of only £1k. Progress may be interrupted later this year by the loss of certain product income, but the share price suggests there won’t be any problems with a new antibody about to launch. I have my fingers crossed everything works out, and continue to hold. 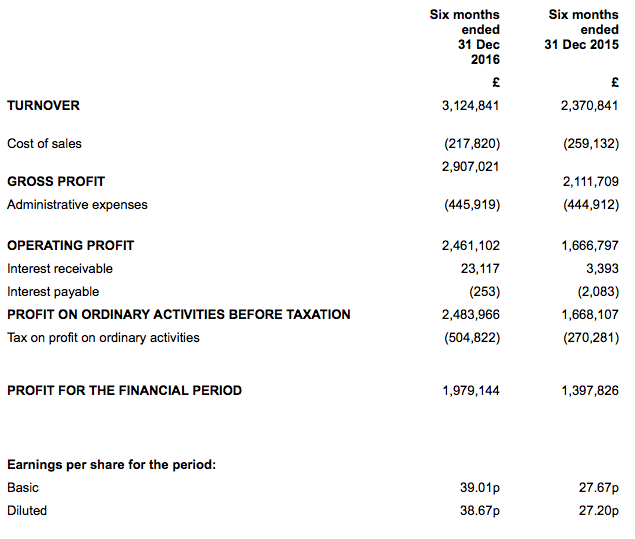 * BVXP allowed the numbers to speak for themselves

BVXP allowed the numbers to do the talking, as the accompanying management narrative was very brief.

Shareholders were told simply that progress was supported primarily by further demand for the group’s vitamin D antibody, with greater shipments of various antibodies to China also mentioned.

The only other explanation for the welcome performance covered post-Brexit currency movements, which were said to have helped revenue gain between 15% and 20%.

I was pleased BVXP’s brief narrative reconfirmed the promising potential of the upcoming troponin product.

This particular antibody ought to be supplied to Siemens during the next financial year and is set to generate “significant revenue” for BVXP. There has been broker talk of annual product sales eventually reaching £2m or more.

The troponin-related revenue is expected to counterbalance some £800k of income that will be lost from another product later in 2017.

The H1 operating margin was a super-sonic 79%, the highest ever for BVXP during the first half… and a smidgen off the 80% seen during the preceding second half.

Given revenue advanced by £754k (to £3.1m), it was somewhat incredible that BVXP’s administrative expenses increased by only £1k (to £446k) during the half.

With the gross margin improving from 89% to 93%, too, clearly there is a very favourable ‘operational gearing’ effect occurring here… whereby extra revenue is dropping straight through to profit.

Elsewhere in the accounts, BVXP’s cash flow continues to wow me.

During this first half, the £2.5m operating profit funded capital expenditure of just £10k as well as an unspecified £152k investment (my guess is this expense relates to one of BVXP’s collaborations in Norway).

The general lack of cash absorption meant this H1 £2.5m operating profit pretty much funded the entire £2.3m final and special dividends declared in October. The H1 dividend was lifted 21%, too.

After paying tax of £415k, the cash position was left at £5.1m (equivalent to 101p per share). The balance sheet remains free of debt and defined-benefit pension complications.

BVXP’s trailing operating profit is £4,924k if I adjust for a £76k foreign-exchange gain recorded during the preceding H2.

Applying tax at the 20% witnessed during this H1, I arrive at earnings of about £3.9m or approximately 77p per share.

That multiple is not an obvious bargain, but may well be justified given the recent growth rate and the first-class finances. The valuation also suggests the aforementioned £800k loss of revenue will not be a problem.

Nonetheless, I still have my fingers crossed that BVXP can continue to extract further growth from its vitamin D antibody… and soon enjoys a money-spinning launch of that new Siemens product.

Meanwhile, the 47p per share ordinary dividend supports a yield of 2.6%.