Event: Preliminary results and shareholder presentation for the year to 30 June 2016 published 17 October 2016

Summary: The antibody developer had already said this statement would reveal bumper results, but the figures were still better than I had expected. Although progress was helped by post-Brexit currency movements, it was clear the underlying business delivered yet another robust performance. The financials remain extremely impressive, with the second-half operating margin hitting an incredible 80%. The icing on the cake was management underpinning its confidence with the declaration of a welcome £1m special dividend. I continue to hold. 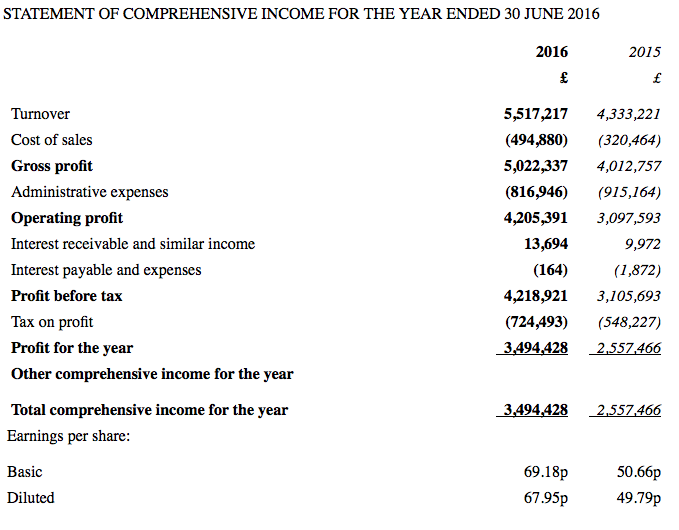 * These results were ahead of my expectations

A positive trading update during August had already prepared investors for a bumper set of figures.

The annual dividend also marched higher — up 30% — with the second interim payout up 20% to 26p per share. A bonus was the declaration of a special payout of 20p per share — equivalent to £1m.

Certainly BVXP’s second half was stronger than its first:

H2 revenue and profit surged 31% and 38% respectively, due in part to favourable post-Brexit exchange rates.

About 95% of revenue was earned from overseas customers during the year, and last week’s statement confirmed BVXP receives its antibody royalties around two months after each half year.

As such, royalties earned between January and June (H2) were in fact converted during August at post-Brexit exchange rates of £1:$1.30 and £1:€1.20.

My rough sums indicate post-Brexit currency movements added about £200k to revenue and — with costs predominantly staff wages paid in sterling — the entire gain probably fell straight through to profit.

In addition to currency movements boosting trading profit, Note 4 of these results showed foreign-exchange rates also creating an accounting gain of £76k. I suspect that £76k was incurred around the June year-end and most likely explains why total H2 administrative costs were some £73k — or 16% — lower than those reported for H1:

Anyway, BVXP confirmed it does not employ any currency hedges and so sterling’s recent weakness should also enhance the firm’s forthcoming first-half performance.

BVXP’s progress during 2016 was supported by further sales and royalties earned from its vitamin D antibody (my bold):

“As in recent years, much of the revenue growth has come from our vitamin D antibody (vitD3.5H10) in the form of increased physical antibody sales and royalties.

The roll out of our customer’s products for vitamin D testing throughout world markets has progressed further during the year. This roll out process has advanced but is not yet quite complete and we remain optimistic that revenues from vitD3.5H10 will continue to grow modestly over the next year.”

BVXP did not use the word “modestly” when assessing the vitamin D product at this point last year, so I assume revenue growth related to this antibody will moderate during 2017.

Other positive developments within these results included “material revenue” now being generated from a new antibody to androstenedione, and the first royalty contracts being agreed with Chinese companies.

Also of note is chief exec Peter Harrison’s reference to the potential of BVXP’s new troponin antibody for Siemens.

In particular, he continues to remain confident that the troponin product will offset the £700k – £800k of revenue that will be lost during 2017/2018 from another product.

In fact, during an interview for the super piworld.co.uk website, Mr Harrison cited his house broker’s research that claimed the troponin product could eventually produce annual revenue of £2m for BVXP.

On the downside, I did notice the development of a different new antibody has now been terminated: 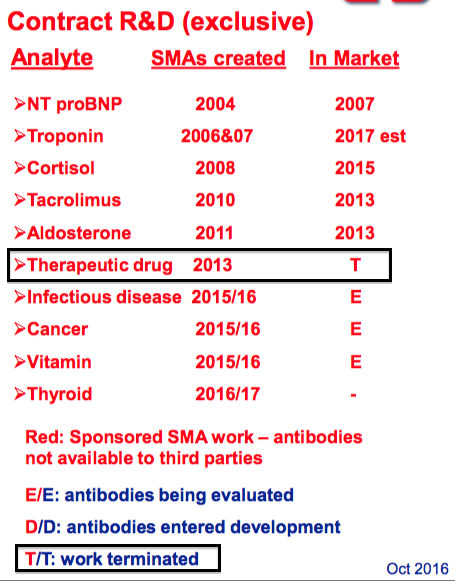 * The H2 operating margin was an unbelievable 80%

In particular, the group’s operating margin has risen higher into the stratosphere — I calculate H2 profit represented an unbelievable 80% of revenue. I can’t recall any other non-property company ever reporting such a phenomenal operating margin before.

I continue to be impressed by BVXP’s cash flow:

I calculate total capital expenditure has represented a minuscule 1.3% of BVXP’s aggregate operating profit during the last five years — and the £21k spent during 2016 was ludicrously tiny.

Meanwhile, BVXP’s working-capital movements are somewhat larger — although absorbing a total £2m during the last five years does not ring alarm bells for me when operating profit has jumped from £1.5m to £4.2m throughout the same period.

The cash generation lifted the year-end bank balance to £5.4m (equivalent to 106p per share), and I do like how the company phrases its cash-position policy:

“Our policy is to hold sufficient cash to facilitate operational and strategic agility and to ensure that any possible variation in future revenue trajectory is unlikely to impinge on our dividend policy which we know to be important for shareholders.”

I doubt the 20p per share/£1m special dividend will impinge on BVXP’s “operational and strategic agility”.

* Is BVXP itself being modest when it uses the term “modest”?

BVXP concluded last week’s results with these remarks (my bold):

“We are delighted to be able to report such positive news for the current year. Furthermore, we remain optimistic that further modest growth next year will come from additional vitamin D antibody sales and royalties.

Beyond that, growth in the period 2017 2020 will be linked to our troponin project and the success of Siemens in their product launches around the world.

We continue our research activities as we look to seed additional projects that will germinate in the period 2020 2030 creating additional shareholder value.”

I note the use of the word “modest”, which was used with almost the exact same text this time last year (my bold):

“We are delighted to be able to report such positive news for the current year. Furthermore, we remain optimistic that further modest growth in the next two years will come from additional vitamin D antibody sales and royalties.

Beyond that, growth in the period from 2017 to 2020 will be linked to the success of our troponin project.

The challenge for our continued research activities will be to seed additional projects that will germinate in the period from 2020 to 2030 to allow us to create further shareholder value.”

I will certainly take another year of “modest” 27% revenue growth!

The 1,450p share price appears to expect a few more good years, too.

Taking the reported £4,205k trailing operating profit, adjusting for the £76k foreign-exchange gain and taxing at a favourable 17% (BVXP enjoys R&D tax credits), I arrive at earnings of about £3.4m or approximately 67p per share.

Meanwhile, the 42.5p per share ordinary dividend supports an income of 2.9%.

For now, I can only trust BVXP can extract a little more growth from its vitamin D antibody while successfully navigating that c£750k loss of revenue.

Mind you, I feel the 1,450p share price could easily be justified if that new product for Siemens really does produce annual revenue of £2m.