Summary: Yet again this lighting specialist has delivered a very satisfactory annual performance, with revenue and profit attaining fresh all-time highs and the dividend lifted for the fifteenth consecutive year. Although the group’s largest division appears to be performing very well, other subsidiaries did not enjoy the very best of second halves. Management comments about 2018 seemed quite cautious, too. The accounts remain in pristine condition, but I am mindful of the shares trading at a rich multiple. I continue to hold. 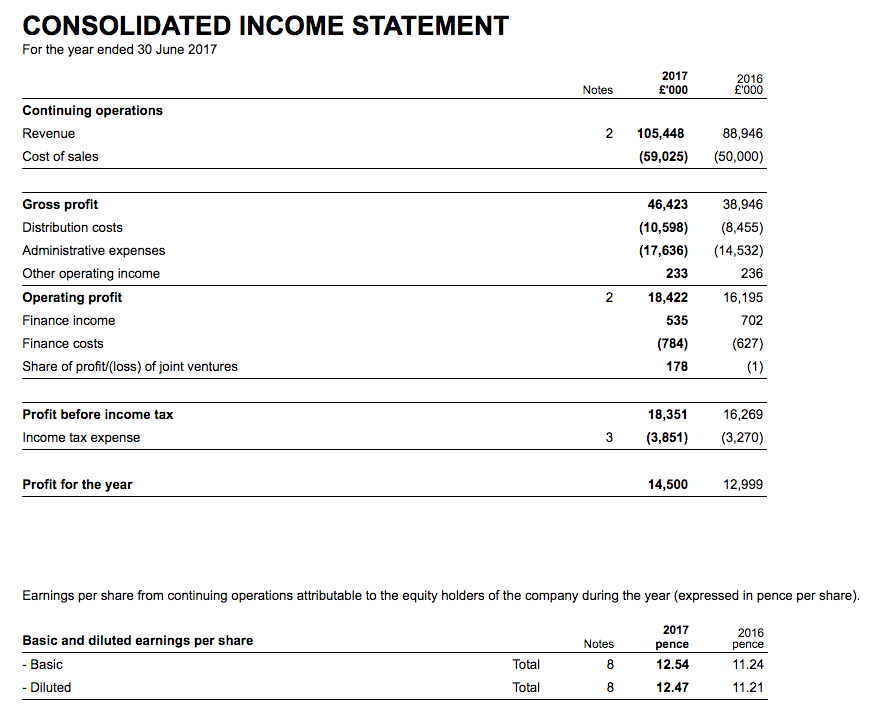 * Revenue, profit and dividend all advance to fresh record highs

TFW’s impressive interim statement — which showed growth of 20%-plus and carried an “optimistic” outlook from the usually conservative board — had already suggested these preliminary figures would be very respectable.

In actual fact, the full-year results showed revenue, profit and the dividend all advancing strongly to fresh record highs:

During 2017, revenue gained 19% and operating profit (before research tax credits) climbed 14% as all companies within the group apparently showed “improved trading performances”.

The progress meant the business has now reported record results for the last four years and has doubled in size since 2007.

One point missing from the management commentary concerned currency fluctuations.

There had been no word on the effect of the weaker GBP on TFW’s performance within March’s first-half update, and there was no word again within this statement.

Some 32% of revenue during 2017 was produced overseas and I am sure the weaker GBP helped to bolster these figures. Given TFW’s large overseas income, I can’t understand why the effect of foreign-exchange movements has not been disclosed.

I should add that these results were the first to be signed off by TFW’s newly appointed executive chairman.

Veteran TFW leader Andrew Thorpe stepped down to become a part-time executive (and part-time angler) during July, and made way for long-time joint chief exec, Mike Allcock, to take on the executive chairman role.

As handovers go, the move did not appear too worrying. Indeed, Mr Thorpe still owns a 24%/£93m shareholding and therefore ought to have more than a passing interest in how the group performs from here. But I feel these results make clear that he wanted to effectively retire from TFW when the business was riding high.

TFW’s second half did not experience the same spectacular growth as the first:

However, I was pleased TFW’s main division, Thorlux, enjoyed a bumper H2:

The subsidiary’s revenue and profit soared about 25% during H2, versus around 16% for H1.

Thorlux’s 2017 performance was certainly its best for several years — the subsidiary had been previously growing at a very low single-digit rate.

I think it is worth repeating the new chairman’s latest comments on Thorlux (my bold):

“Thorlux is our largest company, producing the most extensive range of lighting products for the widest market sectors. It is a product-led business offering solutions with key features and benefits.

Thorlux never targets being the lowest capital cost supplier, instead it targets the lowest cost to the end user through the lifetime of a project after energy and maintenance costs are taken into consideration.

Following its successful transition through the LED lighting revolution, and in its subsequent strengthened position, Thorlux has now entered the wireless lighting controls arena, having fully launched its SmartScan system.

Developed in-house and on sale since September 2016, SmartScan delivered sales that grew rapidly and became a significant part of the year’s success. SmartScan’s features have found favour with existing and new clients.

Understanding and reacting to these technological times, Thorlux continues to invest in research and development. Having launched phase 1 of SmartScan last year, Thorlux will launch phases 2 and 3 in this new financial year, with exciting and desirable new features.”

* Less inspiring H2 progress at Lightronics and ‘Other’ UK divisions

The upbeat progress at Thorlux masked some less inspiring second-half performances elsewhere in the group.

After impressing with a 57% profit jump during the first half, TFW’s Dutch operation, Lightronics, reported a 9% profit drop for H2:

“One off projects” were said to have helped Lightronics during H1, so I’m guessing a lack of such work hindered the H2 effort.

Still, I can’t really complain about the division’s overall achievements for 2017.

Indeed, the ‘downside’ to Lightronics’ progress is that the sum TFW owes to the division’s former owners as an ‘earn-out’ — which is based on the operation’s profitability — has increased once again and now stands at £5.8m.

There wasn’t too much excitement within TFW’s collection of smaller UK subsidiaries:

An improved first half was followed by a second half similar to that of 2016, and profit ended the year flat on last year.

TFW’s accounts continue to be a pleasure to read.

For a start, the balance sheet remains in pristine condition.

TFW’s cash — combined with its eclectic mix of investment property, quoted shares and loan notes — finished the year more than £7m higher at a sizeable £52m.

Furthermore, the balance sheet continues to carry no borrowings and I am glad TFW’s final-salary pension scheme still shows a surplus.

With the aforementioned £5.8m earn-out for Lightronics being the only sizeable liability, I calculate net cash and investments to be approximately £46m or 40p per share.

Although capital expenditure once again exceeded the deprecation charged against earnings, past differences have generally been due to property purchases. Management comments suggested that was again the case for this year.

The cash production allowed the full-year ordinary dividend to be raised 21% to 4.9p per share. My records show the annual payout has now been lifted for 15 consecutive years, during which time four special dividends have also been declared.

The 17% group margin hides the fact the Thorlux division converts a superb 22% of revenue into profit.

Meanwhile, my return on average equity ratio — which ignores the group’s cash and investment hoard and adds back the Lightronics’ earn-out — remains very respectable.

Then adjusting the present £393m market cap (at 340p) for the group’s net cash, investments and the Lightronics earn-out, I arrive at an enterprise value (EV) of £348m or 300p per share.

Given the impressive headline growth rates for the full year, I suppose that upbeat multiple is to be expected in the current stock market, where rich valuations continue to be applied to many attractive growth stories.

However, there are some causes for concern with TFW.

Certainly the second-half progress at Lightronics was not as spectacular as the first, while profit at the Other UK operations appears to have stalled.

“This year’s excellent performance will be difficult to replicate, as we will have to contend with ongoing economic uncertainty from Brexit, government instability and exchange rate variations.”

…may be a hint that the growth rate could moderate — or even reverse — during 2018.

I also wonder about the decision by long-time boss Andrew Thorpe to step down and become a part-time executive in July. I just hope his bowing out is not due to him foreseeing a slowdown on the horizon.

Although the full-year payout was upped 21%, it remains covered a sizeable 2.6 times by earnings and 8 times covered by the group’s net cash and investments.