Summary: These results displayed further “steady and sustainable” growth from the used-car loan firm. Although the seasoned executives remain optimistic about the group’s prospects and the wider economy, margins have dipped once again as the impairment charge representing potential bad loans continues to rise. Still, the 11-12x multiple appears modest given the company’s growth rate and there is a near-5% income, too. I continue to hold. 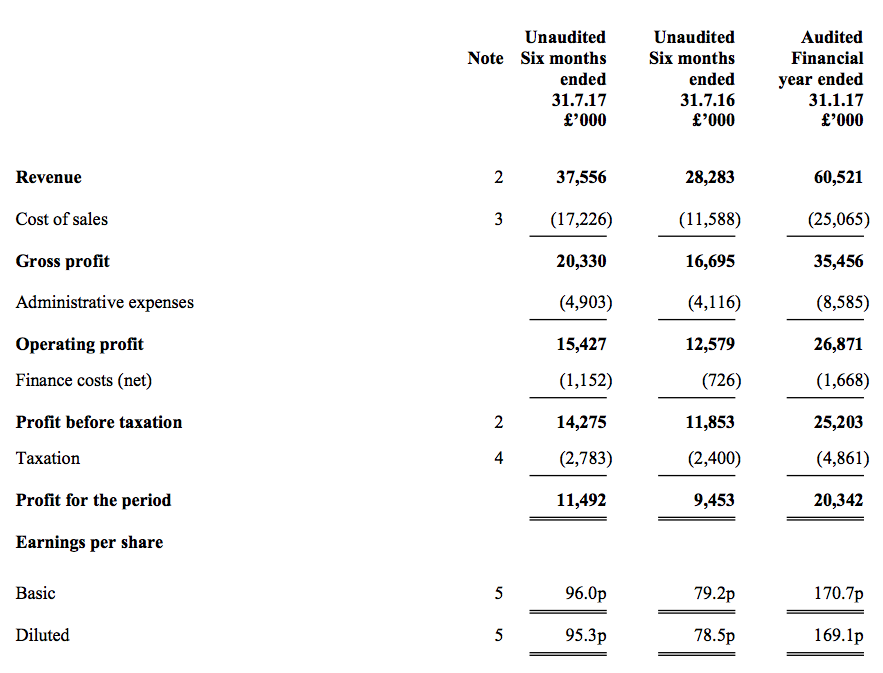 * On course for the 18th consecutive year of record results

A trading update last month had already hinted these first-half figures would be quite respectable.

The H1 statement showed revenue up 33% and operating profit up 23%, and trumpeted the fact that SUS had already enjoyed 17 consecutive years of increasing profits from its Advantage motor-finance division. An 18th year of growth now looks very likely.

Long-time boss Anthony Coombs said the overall performance showed “steady and sustainable growth, which investors should recognise as our trademark”.

Mr Coombs also claimed the group’s “excellent and continuously improving standards of speed and customer service” had helped generate a further 12,542 car-loan agreements during the half.

Emphasising that SUS is somewhat picky with its clientele, that 12,542 figure represents only 3% of the total 440,000 applicants.

A prominent feature of March’s annual results was the impairment figure leaping 60%.

My verdict at the time was that the favourable lending conditions of the preceding few years may now have turned — and I believe these results underline the growing prospect of greater bad loans.

Indeed, the impairment charge for this H1 surged 73%:

Published originally in my March write-up, the following table shows how the impairment charge (loan provision) for 2017 compares to the previous four years:

The trend does not look too encouraging, but the veteran chairman appears quite relaxed. Mr Coombs declared (my bold):

“Doubtless, this [first-half progress] also reflects the robust state of the labour market, with unemployment at 4.4% the lowest for 42 years.  In addition, according to the Recruitment and Employment Confederation, job vacancies are at a two year high, which appears to be exerting a gradual and beneficial influence on recent real wage trends.  We therefore remain confident of future demand in our sector.”

“Although a return, for competition reasons, to Advantage’s traditional customer mix has seen an increase in impairment to revenue, risk adjusted yield has been protected by good interest rates.

Indeed, current levels of impairment are significantly below those experienced just five years ago following the financial crisis, when the business continued to increase profits and maintained very good returns on capital employed.

The rigour and accuracy of our under-writing has always been at the heart of Advantage’s success.”

Impairments ran beyond 30% of revenue during 2012 and the preceding years, so there is still some way to go before those levels are reached.

(I should add that my reading of SUS’s 2017 annual report (point 4 here) indicated the firm could be acting very conservatively with its recent bad-loan calculations.)

* Addressing concerns about the PCP ‘bubble’

This H1 statement made further references to personal contract plans (PCPs) used within the motor trade.

Articles such as this have suggested PCPs are fuelling a credit ‘bubble’ in the car market.

SUS reiterated it has never sold such plans:

“Our relations with the regulatory authorities continue to be good.

Whilst the Financial Conduct Authority expects to scope its report on the motor finance market by next year, we expect this to concentrate upon the recent significant expansion in the personal contract plan (PCP) market, in which Advantage has never been involved.

We also concur with the recent conclusion by the Guardian newspaper which said: “Figures suggesting the used car market is cooling could alleviate concerns over [any] credit bubble in motor finance.” – The Guardian 16 August 2017.”

Last month the group claimed it would escape any fall-out from a PCP downturn:

“Advantage is not involved in the PCP market which has recently come under public scrutiny. Advantage’s average loan size is just £6,200 so should changes in the PCP market have a knock-on effect upon car residual values generally, this would have only a marginal effect upon S&U’s business.”

* Margin, return on equity and debt

There has been no major change to the general shape of SUS’s accounts.

The higher impairment charge meant SUS’s operating margin dropped to 41% from 44% during 2017.

Although a 41% margin remains very high compared to that of most other businesses, a high level of profit is required to generate an acceptable return on the equity that supports the business.

However, the 16% return was assisted by the use of significant debt — net borrowings increased from £49m to £81m during the six months — and adjusting my sums for the loans and associated interest reduces the result to a modest 12%.

Net customer receivables (customer loans) now stand at £227m, from which I estimate SUS can produce near-term revenue of £81m.

Assuming the impairment provision stays at 23% of revenue, and other costs remain at about 35%, I arrive at a potential £34m operating profit. Taxed at SUS’s expected 19.5% tax rate, I calculate possible operating earnings to be almost £28m or 230p per share.

That rating seems quite modest given SUS’s recent growth rate. I can only assume the stock market is worried about a combination of higher impairments, PCPs and wider economic issues.

Meanwhile, the interim dividend was raised 4p to 28p per share, and the rolling 95p per share payout presently delivers a useful 4.8% income.

2 thoughts on “S & U: Heading Towards 18 Years Of Unbroken Growth As Chairman Shrugs Off Rising Bad-Debt Worries”