Summary: These figures could have been a lot worse, given the estate-agency firm remains dependent mostly on the standstill London property market. The major highlight derived from the statement was that WINK continues to outperform Foxtons, and it appears the group is now using the difficult sector to expand its franchising network. Meanwhile, the financials remain in order, the outlook seems relatively promising and yet the valuation is still in the doldrums. I continue to hold. 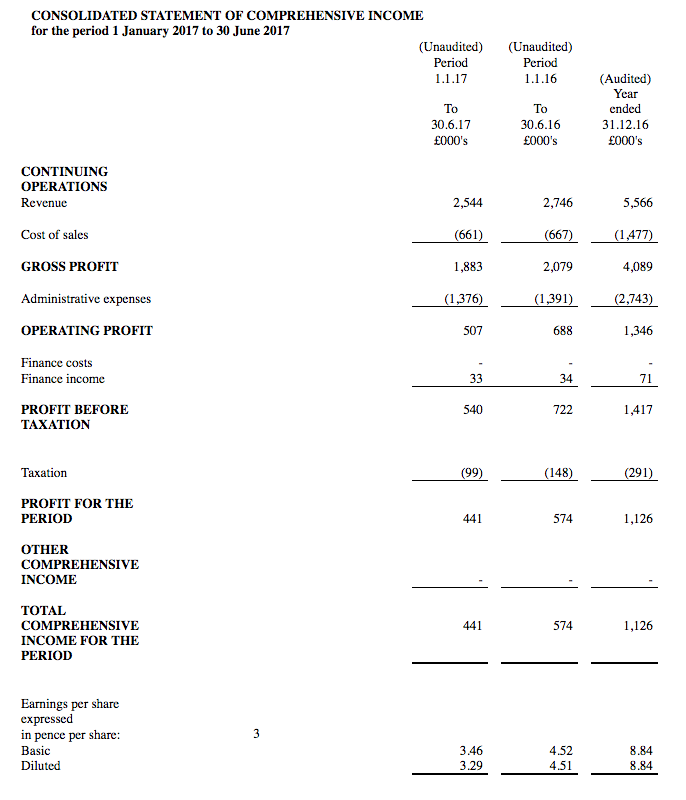 * I am pleased WINK continues to outperform Foxtons

I wasn’t exactly sure what to expect with these interim results.

True, WINK had signed off its 2016 annual statement by outlining its hopes for a “broadly flat” London property market for 2017.

However, the first half of 2016 was supported by what WINK described as a “buy-to-let mini boom”.  So this H1, when compared to last year at least, was never going to be great.

Indeed, what with all the ongoing economic and political matters, plus affordability and stamp duty concerns — and then facing some underwhelming figures from larger rival Foxtons (FOXT) — it was easy to expect bad news.

In the circumstances, I felt WINK’s first-half achievements were quite respectable.

However, the real highlight for me is that WINK continues to outperform FOXT.

While this comparison may not be strictly like-for-like — WINK generates about 80% of its revenue from its London-based franchisees, while FOXT’s income is almost entirely derived within the capital — I think the overall trend is quite accurate.

Here are the figures:

With WINK’s franchise network increasing its revenue from 37.3% to 39.4% of Foxton’s top-line, it seems to me WINK’s self-employed franchisees are coping with London’s awkward property market somewhat better than FOXT’s corporate employees.

* High margins, low capex and plenty of cash in the bank

The group continues to take a meaningful 12% cut of its franchisees’ income, the 20% operating margin remains very respectable while capital expenditure — at just £57k for this H1 — is still remarkably low.

Despite the profit drop, I note WINK’s cash generation from operations was much better than H1 2016: 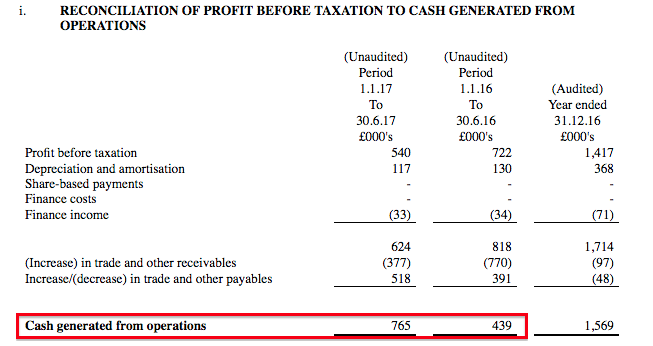 It all meant cash finished the period at £3.0m and the balance sheet remained free of debt.

Let’s not forget that, at the end of 2016, WINK had also loaned its franchisees a total of £1.2m and I’m guessing that figure is about the same now.

Plus, this half enjoyed interest income of £33k, which I reckon related almost entirely to the outstanding franchisee loans and represented a useful 7% of operating profit.

* I have increasingly questioned Purplebrick’s business plan and operational quality

I attended WINK’s AGM last year and the chairman suggested then that a greater number of offices did not necessarily mean a greater profit for shareholders when a buoyant market started to fall.

With the capital’s property market remaining subdued, it looks as if WINK’s franchise system is starting to appeal to ambitious agents employed elsewhere:

“Start-up franchisees are typically successful managers whose earnings are depressed by current market conditions and who are looking to own equity in their own business, with the opportunity to secure their income longer term and no longer be hamstrung by the corporate requirements of larger well-known brands dragging down their earnings potential.”

WINK has opened seven new offices this year and has “a number of new offices lined up for launch for January 2018”.

The details about new offices suggest the traditional high-street agent is not dead just yet… despite everything you hear from online competitor Purplebricks (PURP).

Since my write-up of WINK’s 2016 results, I have increasingly questioned PURP’s business plan and operational quality.

You can read my Comments here, here and here.

While I am not writing off online agents entirely, I now feel there will be ample opportunities for good, traditional agents to prosper.

“We expect our seasonal performance to revert to normal in 2017…”

“Based on the performance in the first half of the current financial year, and recent trading, we expect that full year results should be in line with management’s expectations…”

“With current market conditions set to continue for the remainder of the year we expect to see franchises that have converted to the Winkworth brand growing their market share by plugging into our evolving platform, and new franchises approaching us to benefit from the greater rewards of equity ownership. This combined with the Company’s strong financial position provides us with an ongoing positive outlook for growth of the network.”

I think it is fair to assume the upcoming second half should be at least as good as the second half of 2016.

Then dividing that 67p per share by my earnings estimates gives a P/E of around 9.

That rating does appear good value to me, especially given the current stock market where any half-decent business seemingly enjoys a multiple in the high teens or beyond.

In fact, I am struggling to think of another quoted company that is valued on a single-digit multiple and yet offers net cash, high margins, generous cash flow and the prospect (perhaps!) of steady growth during the next few years.

In the meantime, the trailing 7.2p per share dividend continues to be distributed through quarterly 1.8p per share payments and supplies a 7.2% income.