Summary: These first-half figures actually set new H1 records, but they also confirmed TFW’s good run of double-digit profit growth will pause during 2018. Pressure on prices for tunnel lighting was cited as one reason for the pedestrian performance. Should revenue and profit continue to plateau, the elevated share price — rated at 22x my earnings guess — may be at risk of a de-rating. Still, the lighting specialist remains a very respectable business, and continues to be led by directors that think long term. I continue to hold. 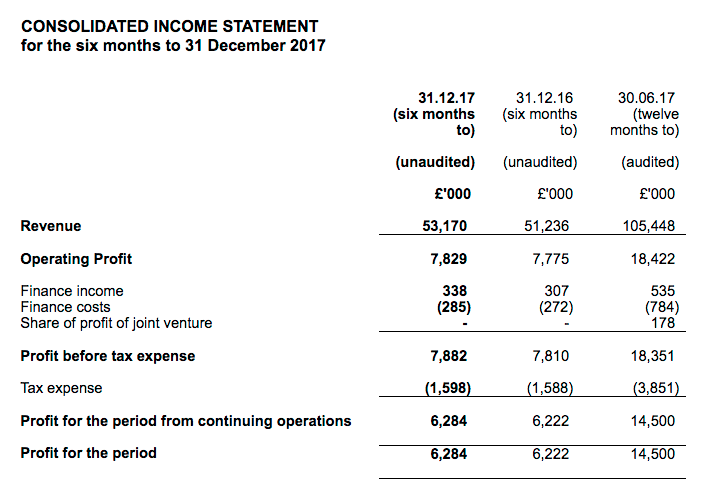 Cautious remarks within September’s full-year statement and November’s AGM update had already suggested TFW’s first-half progress would not be that spectacular.

As it turned out, this H1 statement did in fact show record revenue and profit — albeit only just. The top line improved 4% while reported operating profit climbed 1%.

The management narrative did not really explain the reasons behind the subdued performance. However, the following paragraph did reveal certain “pressure on selling prices”:

“The majority of Group businesses performed in line with or ahead of last year, with the exception of TRT, where orders increased but margins reduced due to market pressure on selling prices. Improvements at TRT are underway for the second half of this financial year.”

TRT is TFW’s road and tunnel lighting division, and manufacturers lights such as those below:

“TRT faces ongoing challenges from pressure in the market to reduce selling prices, and it is important that, like other Group companies, it finds features and benefits that customers will select and pay more for. Creating new product innovations is a high priority, together with tackling other growing pains. TRT’s revenue increased 4.8% in 2016/17, but profits were slightly lower. The new year has started with an excellent order book.”

I guess TRT’s  “excellent order book” did not translate into an excellent financial performance for this first half.

Following a year or two of impressive progress, TFW’s larger divisions — Thorlux and Lightronics — sadly lost their momentum during this H1:

(Looking at that Thorlux table, I wonder if repeating the super £8m H2 2017 profit will be that easy during the current H2.)

More than a quarter of TFW’s 2017 revenue was generated in Europe, and a quick check on the GBP:EUR exchange rate does not suggest currency movements had a significant effect during this H1.

So it does appear the wider business may have simply ‘paused for breath’ after lifting group operating profit by approximately 70% between 2013 and 2017:

At least moves are afoot to rekindle the growth rate. Product development “continues apace”, useful acquisitions have been located while plans for a new European showroom — similar to the impressive set-up within the group’s Redditch HQ — are underway.

* Cash, investments and an odd £6m increase to ‘other payables’

I could not find anything untoward within TFW’s cash flow statement.

I calculate TFW’s cash — plus the group’s eclectic mix of property, loan notes and investments — now stands at £51m, or 44p per share.

One balance-sheet entry that changed significantly was ‘other payables’:

This liability increased by a substantial £6m during the six months. The 2017 annual report described the ‘other payables’ entry as:

Earlier accounts indicate the bulk of the liability relates to the earn-out involved with the 2015 Lightronics acquisition.

“In December 2017, the Group acquired 100% of the share capital of Famostar B.V., an emergency lighting specialist in the Netherlands. The company was acquired by Lightronics Participaties B.V. for an initial consideration of €7.6m (circa £6.8m) with an estimated additional €0.5m (£0.4m) payable subject to performance conditions relating to EBITDA in 2017 and 2018.

Based on current best estimates, a further €2.7m (£2.4m) could be payable to the holders of share appreciation rights in Lightronics Participaties B.V. which is subject to future performance conditions linked to a significant increase in EBITDA over the next three years.”

So that explains some of the liability’s increase. I suspect the rest of the increase has been counterbalanced by other accounting movements, but I will have to keep watch on this growing liability just in case.

I am pleased TFW’s final-salary pension scheme continues to operate at a surplus and is not proving to be a major ‘hidden’ drain on cash flow: 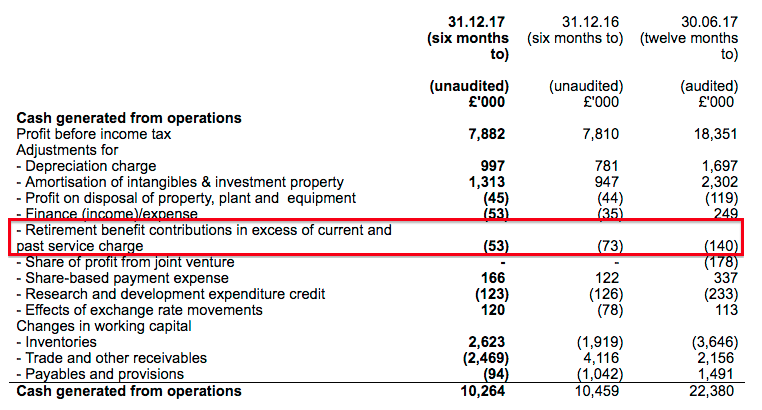 I am also pleased the group operating margin remains a respectable 15%, and that the main Thorlux division enjoys a healthy 18% margin.

TFW’s outlook for the second half was somewhat lukewarm:

“It remains a challenge to maintain last year’s result, in spite of the interim performance. Revenue and profits should be bolstered by the addition of Famostar in the second half of the year; however, whilst the Group will endeavour to reach record levels, it seems unlikely.”

I have to admit, a 22x rating does look racy for a business that has just reported 1% profit growth. Were the standstill earnings performance to extend into the next financial year, the share price could face a significant risk of de-rating.

Nonetheless, I don’t get the impression TFW’s bumper 2013-2017 period was a complete growth ‘fluke’.  As such, I am hopeful that management’s “vision of stable long-term growth” can soon re-emerge within the accounts.

What’s more, my seven-plus years as a TFW shareholder have told me it has generally paid to back this conservatively run business — rather than worry too much about near-term earnings and immediate valuations.

Those seven-plus years have also told me not to expect too much as a dividend.

The interim payout was lifted 4% to 1.4p per share, and the trailing 4.95p per share dividend is now covered a very generous 2.6x by my latest earnings guess — and 7x by the cash/investment hoard.