Summary: Bumper first-half figures and subsequent monthly updates had already ensured the fund manager’s summary annual results would be positive. However, the second half did witness funds under management decline and the group’s own projections for the coming year have now been reduced. In addition, client fees have been cut once again while the main emerging-market strategy continues to underperform. I still hope that, one day, this cash-rich, high-margin business can attract meaningful new mandates to spark a share-price re-rating.  Until then, a 6.8% income remains available. I continue to hold. 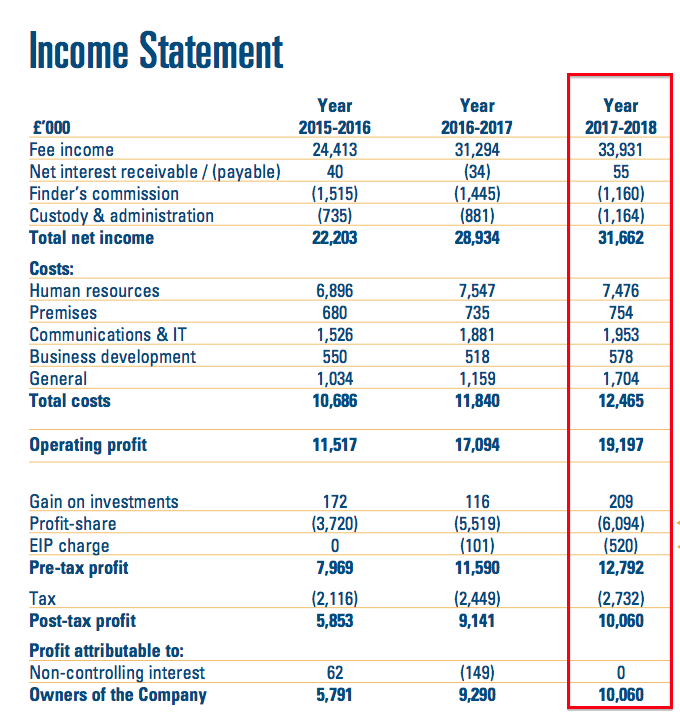 * Further credit to management for another set of prompt summary results

Once again CLIG took just twelve working days to construct and publish these summary annual accounts. I wish all quoted companies could be so timely when presenting their yearly financials.

Note that CLIG’s RNS on the day did not reveal all of the numbers. The group’s website carried a City presentation, which included some detailed figures, various charts plus lots of other stats.

* Earnings came in at the mid-point my of monthly guesses

In the event, the presentation confirmed funds under management (FUM) at the end of June had advanced $446m, or 10%, to $5,107m since the preceding year-end. However, FUM did slide 4% from the $5,329m reached at the December half-year.

Full-year revenue climbed 8% and in turn lifted operating profit by 9%. Note that the performance was hindered slightly by adverse foreign-exchange movements. CLIG’s revenue is almost entirely denominated in USD while close to 40% of costs are denominated in GBP. I reckon the average GBP:USD rate during the year was 1.35 versus 1.27 for 2017.

My own monthly calculations following the interim numbers had indicated annual earnings could have been running at between 37.1p per share and 42.3p per share. The actual earnings reported came in around the mid-point of my guesses at 39.5p per share:

The icing on the cake was the annual payout being lifted tuppence to 27p per share. The dividend has now been raised two years on the trot following six years of a static 24p per share payout.

* Heading for a third straight year of underperformance 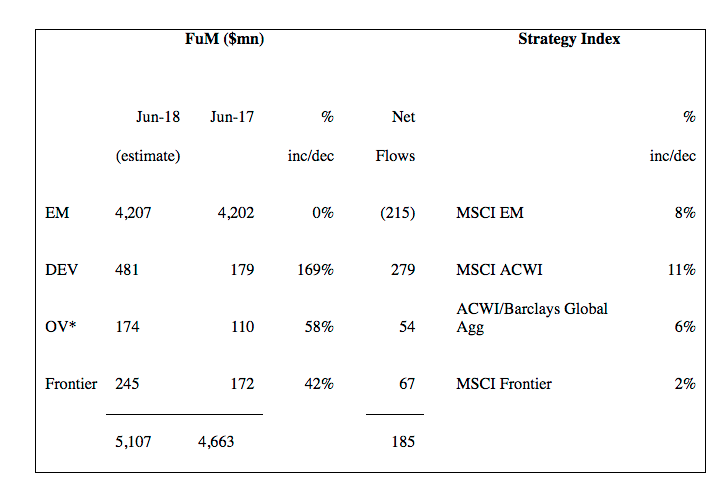 The main emerging-market division — which now accounts for 82% of FUM — recorded a 5% positive return that was all but wiped out by client withdrawals of $215m. The associated benchmark gained 8%.

I mentioned within January’s write-up that CLIG’s representative Emerging Market fund had lagged various benchmarks during the last two years.

The red circles within the slide below confirmed that remains the case: 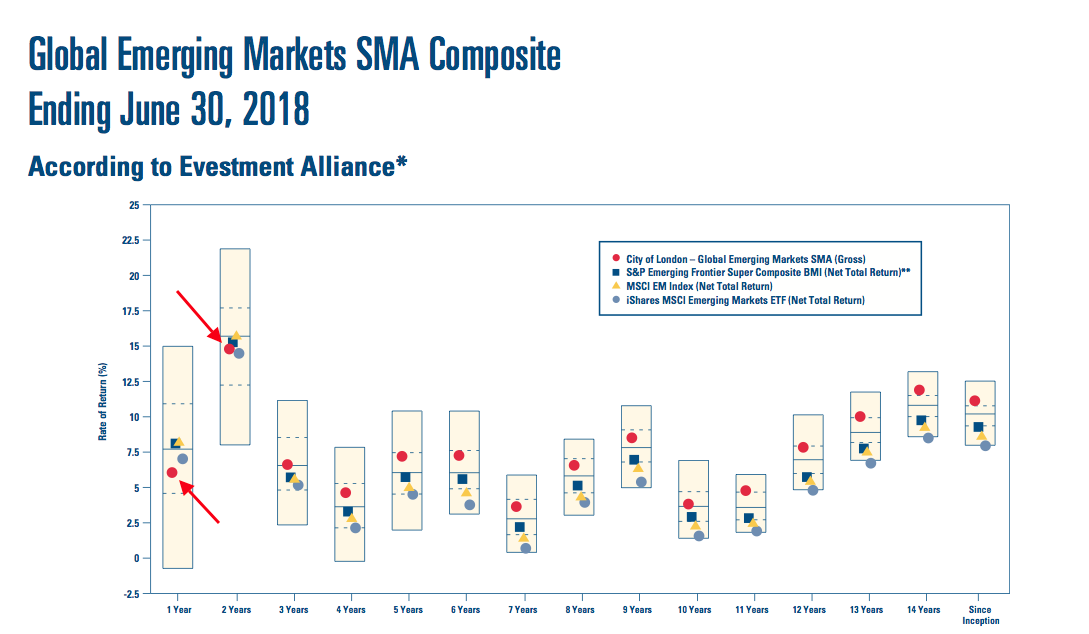 Another slide showed the same representative fund heading for its third straight year of underperformance:

Better progress was reported within CLIG’s developed-market, frontier-market and opportunistic-value products. These divisions combined to almost double their total FUM to $900m following an extra $400m of incoming client money.

These smaller divisions collectively reported an 8% or so investment return, which looks to have matched their associated benchmarks.

I have my fingers crossed that CLIG’s smaller products can continue to attract new money… while clients of the emerging-market division might soon stop heading for the exits!

Mind you, I do wonder if all the client inflows and outflows are simply due to existing customers shifting their money from one division to another.

You see, the shareholder presentation showed CLIG serving 156 clients at the end of June, while the count this time last year was 155 and the count the year before that was 153.

All in all, I get the impression CLIG’s current FUM progress remains dictated mostly by wider market movements, with all the client comings and goings counterbalancing each other.

The aforementioned 4% reduction to FUM during the second half appears to have knocked CLIG’s own projections within its dividend-cover template:

Don’t get me wrong, I still applaud CLIG for regularly publishing this template to highlight what could happen.

But the ups and downs of client additions/withdrawals — alongside wider market movements — have shown this bar chart to be somewhat optimistic at times.

You can see that for yourself in the picture above, with the red dotted lines indicating the previous quarterly profit projections.

For the record, at the start of the year the template looked like this:

Essentially CLIG now reckons it could retain earnings of £2.5m during the current 2019 financial year — versus £4.0m expected back in January.

I reckon £2.5m transferred to reserves after paying a 27p per share dividend means earnings could be approximately 36p per share.

Closer inspection of the template’s “key assumptions” shows the firm now expecting FUM to increase by $250m during the coming year:

Back in January the projection was $350m.

I was disappointed to see CLIG yet again owning up to lower net fees within its helpful FUM/exchange-rate table: 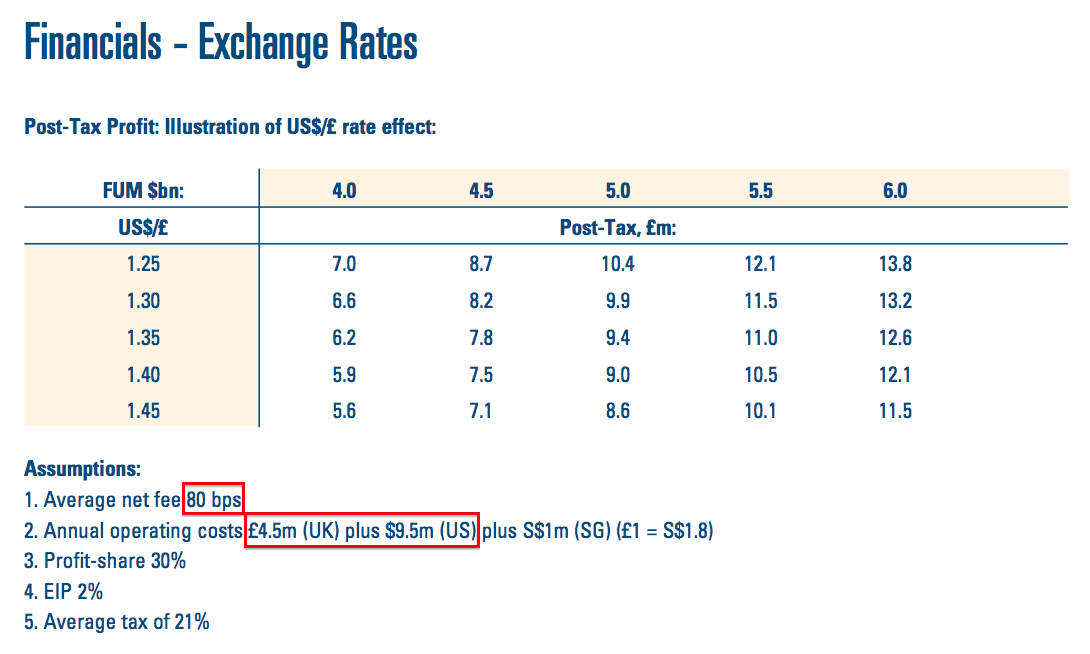 I wonder if the next presentation will show fees another two basis points lower at 78.

I see the indicated charge for the Employee Incentive Plan (EIP) remains at 2%. The cost of this terrible scheme during 2018 was actually £520k, or 2.7% of pre-bonus operating profit.

I dare say the EIP’s cost could reach the 5% cap during the plan’s remaining two years. The earlier “key assumptions” for that dividend-cover template are projecting 4%.

I also note the indicated tax rate is 21%, which matches the 21% applied to the 2018 income statement but compares to 20% cited in those earlier “key assumptions”.

The summary accounts did not show anything untoward. 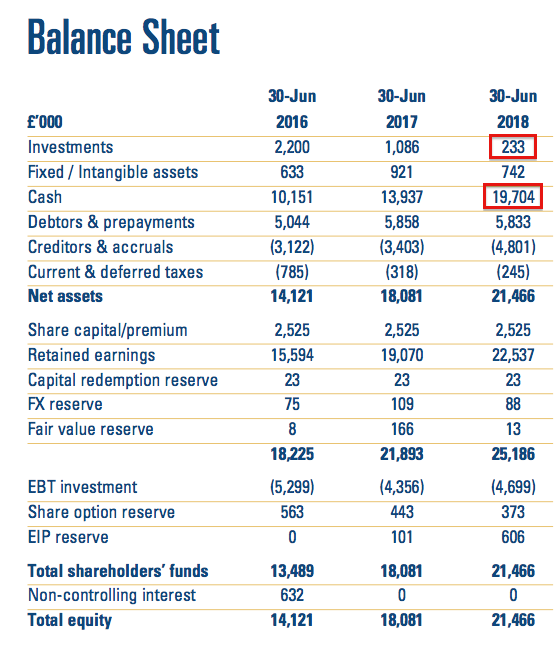 Meanwhile, the cash flow statement showed the bank balance bolstered by a useful £1.6m contribution from staff options and the sale of certain seed investments: 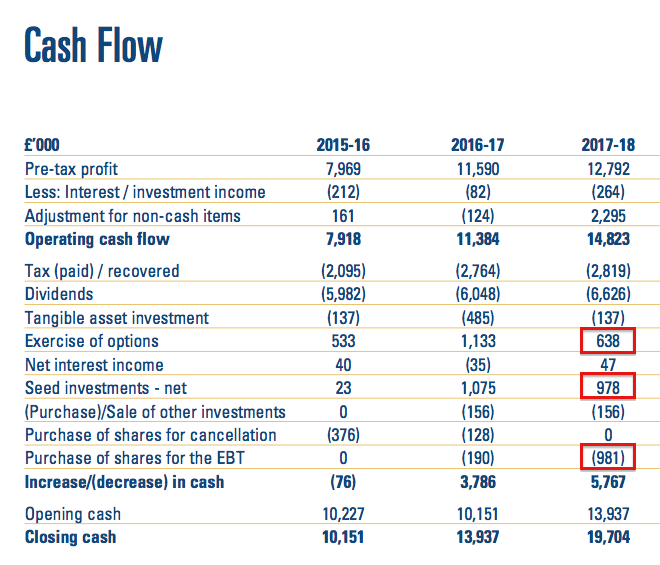 Following the publication of the full 2018 results (see this Comment below), I can confirm cash generation during last year — and the few years before that — has been very positive:

Since 2014, aggregate cash spent on capital expenditure (of only £906k) has been covered by the depreciation and amortisation charged against earnings.

Meanwhile, just £623k has been absorbed into working-capital requirements during a five-year period when total operating profit came to £48m.

My early sums indicate the 2018 operating margin was a healthy 37% (the highest since 2008), with the return on average equity coming in at a robust 51%:

I will look at the accounts in more detail when the full annual report is issued during September.

I am using CLIG’s latest exchange-rate/FUM table (see above) for my valuation sums.

Adjusting the £107m market cap for the cash and investments of £19.9m and regulatory capital of £1.5m, my enterprise value (EV) calculation for CLIG is approximately £89m or 331p per share.

Dividing that EV by my earnings guesses gives possible P/Es of 8.8 and 9.2 — depending on which EIP assumption is used. Either way, the multiple range hardly looks expensive in the current market.

That said, do remember:

i) these shares have rarely traded at an extended rating;
ii) little progress has been made attracting additional FUM and clients for some years;
iii) client fee rates have been chipped lower over time, while costs have been rising;
iv) the balance sheet has regularly carried a sizeable cash position, which in reality may be needed to reassure clients and therefore might not be ‘surplus to requirements’ for valuation purposes, and;
v) founder/chief exec Barry Olliff retires at the end of 2019 and is currently reducing his near-8% shareholding (he last sold during March at 450p).

In my view, a notable re-rating will be hard to achieve until the group starts to win fresh clients that bring in significant FUM.

Still, I am happy for now to collect the greater, 27p per share, dividend and enjoy the 6.8% income — and trust one day there could be some meaningful client/FUM improvements.