Summary: Favourable market movements helped CLIG report its best-ever first-half figures, with revenue, profit, net cash and the dividend all moving higher. However, the finer details showed the emerging-market fund manager struggling to capture new clients as its main strategy under-performed. Meanwhile, fee rates are still being chipped away and staff costs keep on climbing. The shares may look under-appreciated on a P/E of 10 and yield of 6%, but sadly a re-rating does not appear imminent. I continue to hold. 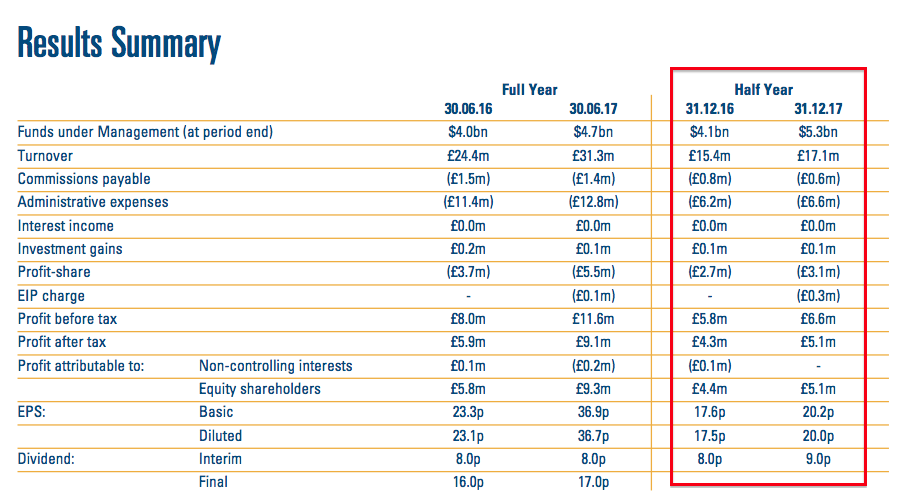 CLIG’s monthly website updates had already suggested these results would be positive.

Wider market movements generally underpinned the improvement. However, CLIG did admit its main Emerging Market division had under-performed its benchmark and had witnessed an $89m outflow of client money:

At least CLIG’s smaller divisions — currently representing 13% of FUM — either matched or outran their respective benchmarks.

CLIG’s FUM in dollar terms is now at its highest level since 2011, although the £3.9bn sterling equivalent is a new company record.

All of CLIG’s main financial measures moved higher. Revenue gained 10%, pre-tax profit climbed 14%, net cash and investments improved £3.4m to £15.7m, while the interim dividend was raised a penny to 9p per share.

The payout lift was encouraging. Last year CLIG upped its annual dividend for the first time since 2011, and the group’s dividend cover now gives scope for further payout uplifts…

A revised dividend-cover template within CLIG’s shareholder presentation suggests the payout may be lifted again for 2018.

Essentially CLIG reckons it could now retain earnings of £3.6m during the current year — versus £3.4m previously expected.

Initial assumptions for the 2018/2019 financial year indicate earnings of £4.0m could be retained after dividends (of approximately £6.6m).

CLIG was happy to distribute all of its earnings as dividends between 2013 and 2016. So perhaps some of that £4m ‘cushion’ will be paid to shareholders, too.

While CLIG should still be given credit for publishing these templates — I have never come across another quoted business that provides anything similar — the templates have often proved to be somewhat optimistic.

What typically undoes CLIG’s projections is a mix of falling markets and client withdrawals.

For what it is worth, CLIG estimates it can collect an extra $225m of client money during the current second half, and an extra $350m during the following financial year:

Those estimates do look ambitious when just $62m (net of withdrawals) was received from clients during the last six months (when markets were favourable). 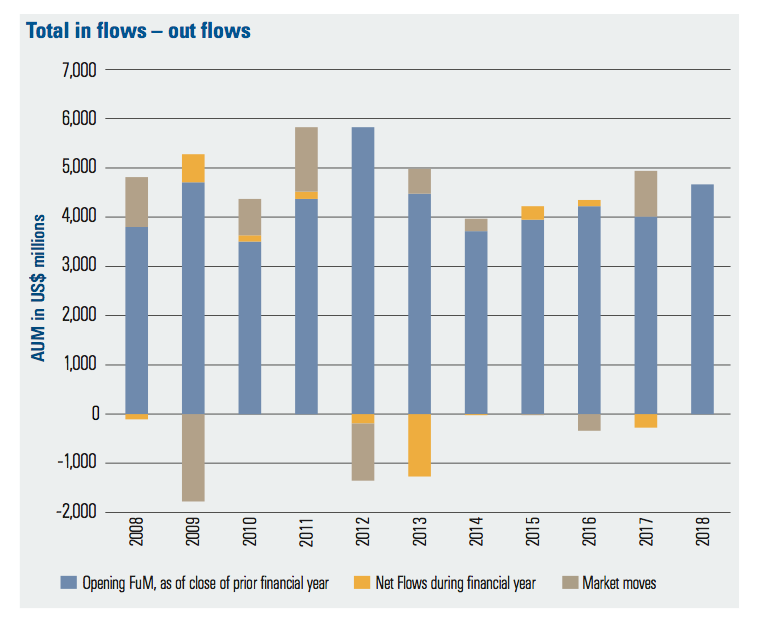 The yellow boxes represent the net amount of FUM added or withdrawn each year.

As you can see, the amount of new money added between 2014 and 2017 is shockingly low — and the net $62m received during the latest six months continues the lacklustre efforts.

A couple of snippets from a past AGM explain the problem.

First, CLIG’s main Emerging Market strategy is not ‘scalable’ — the associated FUM is apparently limited by a ‘capacity constraint’ of between $4bn and $5bn. I assume the constraint is due to the size and scope of the underlying investment opportunities.

Emerging Market FUM currently stands at $4.7bn, so further headroom there appears limited. New clients will therefore gravitate towards CLIG’s other strategies, but these have shorter track records and may be harder to sell.

On this selling point, I was told at the AGM that the group’s three ‘business development’ employees are only ‘introducers’ of clients to CLIG. The actual selling is done by the fund-management team, which I thought was odd. In my view, fund managers are more used to spreadsheets than marketing!

Over time I have sadly concluded that CLIG is simply reluctant (or unable) to promote itself well to new customers. The word “marketing” is mentioned only once within the 2017 annual report narrative.

CLIG’s investment performances may not be helping the marketing cause.

“The Emerging Market strategy under-performed due to widening discounts and an underweight to the Chinese IT sector which posted very strong returns.”

The shareholder presentation contained this chart: 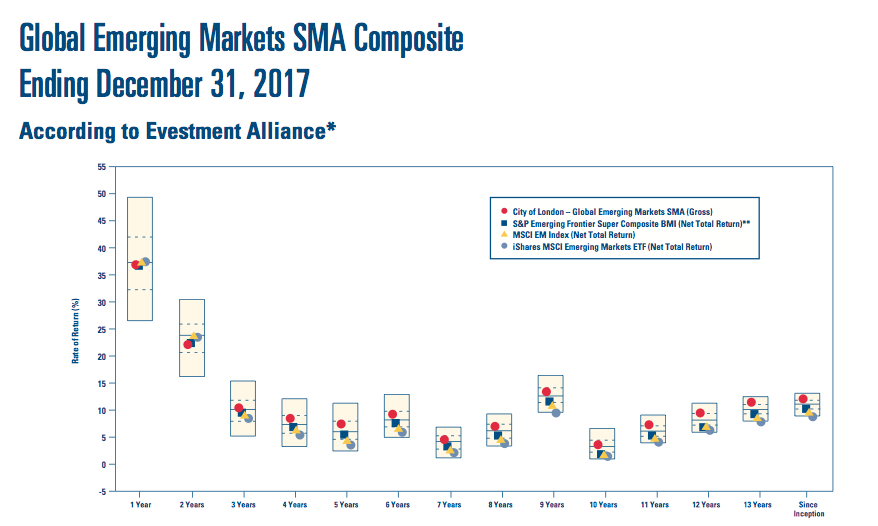 Predicted overheads are set to rise 4% this year, versus 3% expected six months ago. The cost base may then advance another 3% for 2018/2019.

However, don’t forget the outrageous extra bonus pot, which is now expected to skim 4% from operating profit next year (this employee incentive plan can snaffle up to 5%).

CLIG’s regular exchange-rate/FUM matrix has once again been tweaked unfavourably.

This time last year, CLIG’s presentation showed clients were paying fees at 85 basis points on the money they invested. The figure dropped to 84 basis point six months ago, and the latest presentation now states 82 basis points: 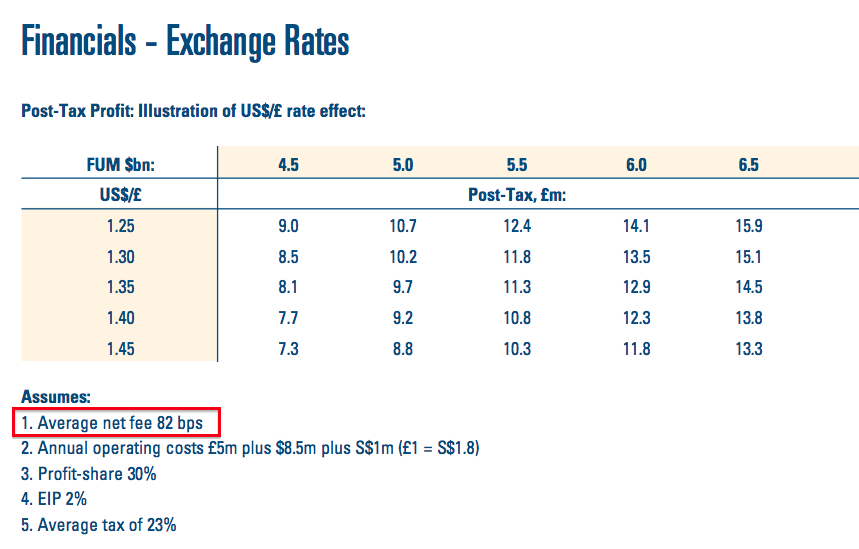 For my valuation sums, I have modified this profit table to assume the employee incentive plan takes the full 5% of pre-bonus operating profit.

After adjusting for cash, investments and regulatory capital, my enterprise value (EV) for CLIG is approximately £100m or 374p per share. Dividing that EV by my earnings guess gives me a possible P/E of 10.

That multiple does not look extravagant in the current market, although bear in mind:

i) the shares have rarely traded at an extended multiple in the past;
ii) little progress has been made attracting new FUM for some years, and;
iii) founder/chief exec Barry Olliff retires at the end of 2019 and is currently reducing his 8% shareholding.

In my view, a notable re-rating will be hard to achieve until the group starts to win additional clients that bring significant FUM.

Still, I am happy to collect the trailing 26p per share dividend and enjoy the 6.0% income, and hope one day there could be some radical marketing developments.