Summary: I’m starting to go off City businesses. First it was Record and now it is CLIG that wants to pay its employees a lot more… despite profits at both having gone nowhere for years. Sadly, CLIG’s revised bonus plan has offset some promising news of greater funds under management and the real prospect (finally!) of a dividend lift. I can only hope the fund manager can soon deliver the much-needed performance to justify the extra bonus cost. I continue to hold. 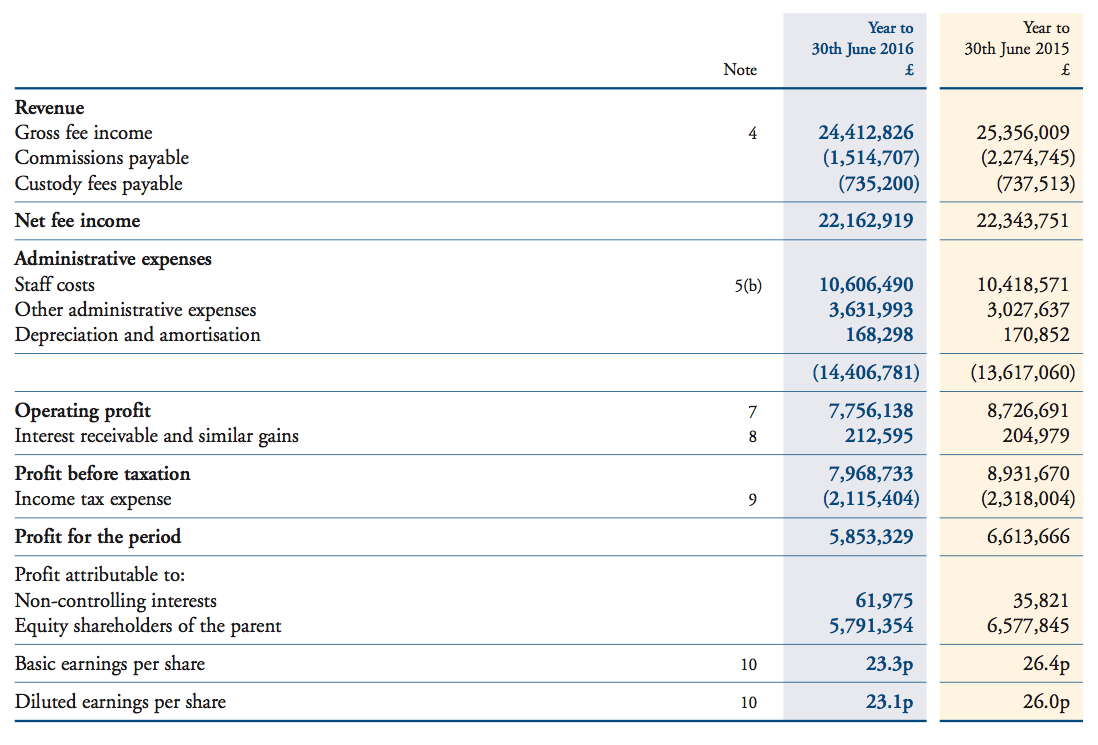 * These results confirmed the summary accounts issued during July

The numbers showcased within yesterday’s RNS were no real surprise — the figures had already been summarised within a trading update during July.

However, these final results did not exactly match the earlier summary numbers.

Accompanying the results RNS was the 2016 annual report, and the various charts it contained had not changed from July’s update.

* New client money did fall short of expectations, but not as much as I had calculated previously

I must confess that I knocked CLIG unfairly within my verdict on July’s update.

I wrote back then that CLIG had “predicted new money of $500m could be garnered during the year just passed”.

The 2016 annual report clarifies exactly how much new money was raised: 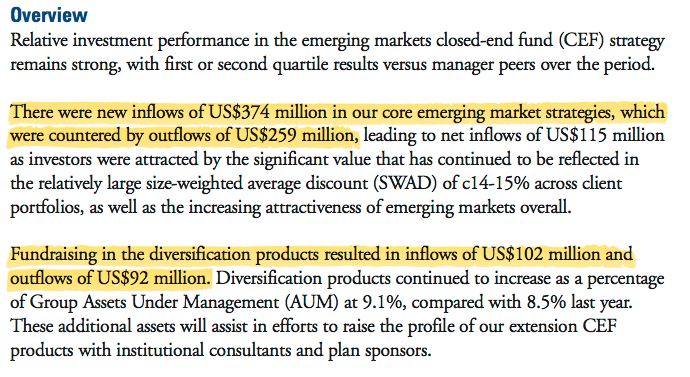 Where I went wrong was by looking at the amount of new money raised from new clients, instead of new and existing clients.

Nonetheless, the $476m of new money raised from all clients was still short of the original $500m target.

Furthermore, the $125m of net new money raised does mean that CLIG’s funds lost $341m due to investment performance last year — equivalent to 8% of their starting value.

At least that 8% loss was better than the 12% loss suffered by CLIG’s emerging-market benchmark index.

I mentioned in July that CLIG was still contemplating changes to the group’s employee share ownership plan (ESOP).

I also mentioned that the term “Existing ESOP is considered uncompetitive” was telling me that the new ESOP would be more expensive to shareholders.

Sure enough, these results have confirmed the new plan will indeed be more expensive to shareholders.

Here is the relevant text from the annual report:

“While CLIG has had an ESOP in place for many years, the shares held for the ESOP by the Trustees on behalf of staff have not received dividends. This has meant that the annualised rate of total return of approximately 11% received by an initial investor at the point of CLIG’s IPO has been reduced very significantly for ESOP holders. Specifically over the past few years the dividends have made up a very significant percentage of the total return.

In an attempt to broaden the base of employee ownership, encourage direct staff participation and make CLIG shares more attractive to staff, we will be bringing forward to shareholders a proposal at the forthcoming AGM. This proposal will include, for a four year period, an increase in the staff bonus pool from 30% to 35%. This increase will only apply while the dividend payable to shareholders is at least maintained at 24p.

The additional 5% from the bonus pool will be offered to staff as a contribution towards the new Employee Incentive Plan, on condition that they put up matching funds.

This will have the effect of incentivising participating staff by matching their investment with an equivalent contribution from the company.”

For a start, it is not obvious to me that CLIG’s performance during the last few years justifies a larger bonus pool for staff.

The chart below shows that funds under management (the light blue bars) have declined much further than emerging markets in general (the dotted line), leaving CLIG’s income (the dark blue line) stagnant at best since 2011: 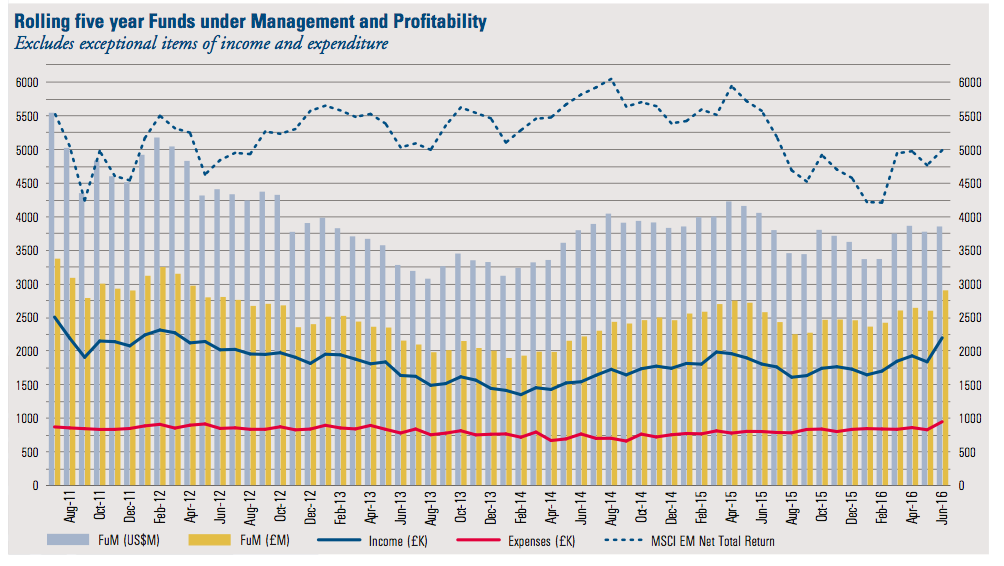 Judging by the annual report, it appears CLIG’s employees are annoyed about their ESOP shares not accumulating the significant dividends that have been declared during recent years.

I would counter that by arguing that if the staff had actually worked harder to increase and maintain funds under management, their ESOP shares might have been worth a lot more through substantial capital gains…

…and the missed dividends may not have been so much of an issue.

As it is, the staff have seen the price of their ESOP shares go nowhere for the last five years:

…and sadly management has given in on the (presumed) unrest within the company.

* Why not just pay the staff their ESOP dividends?

In my opinion, a fairer way to appease staff would be to simply pay the waived dividends on the ESOP shares:

At the last count there were 1,852k ESOP shares, which would have cost CLIG an extra £444k had they all received last year’s 24p per share dividend.

This dividend-based alternative is not ideal, as it still involves a not insignificant extra cash cost to shareholders.

However, the dividend alternative would more align CLIG’s staff with shareholders.

You see, as the proposed bonus plan stands now, CLIG’s staff could enjoy the extra bonus as earnings rise… but with shareholders still receiving the same 24p per share dividend.

And that brings me to another niggle about all of this — it is a tad galling to see the 35% bonus pool can be operated during years when the dividend is held (but not reduced).

I mean, loyal shareholders have survived on the same 24p per share payout for six years now…so it would be nice if the additional ESOP payments were made only if our payout was raised, too.

* More votes against executive pay at the AGM?

The plan to enlarge the bonus pool to 35% of pre-bonus profit is subject to a vote at October’s AGM.

I’m certainly against the proposal, and I dare say other investors will be as well.

The two previous years witnessed protest votes of 16% and 74%, as various concerns were voiced about the ESOP plan and payoffs to former directors.

Anyway, I do hope this enlarged bonus-pool resolution is voted down. I guess many shareholders have simply become fed up with CLIG’s expensive employees and their stagnant performance.

But it could be worse — CLIG might have ‘done a Record’ and just given staff members a flat 10% pay rise… without any performance justification or shareholder vote whatsoever.

* Some stats about staff performance

To CLIG’s credit, the annual report does include a ten-year table that summarises the “average employee remuneration” and the percentage change on the previous year:

I have performed my own calculations, where “employee remuneration” includes all employee costs (wages, bonuses, taxes, pensions, options, etc).

I have also compared funds under management and gross fee income to the number of employees. Here is a summary from the last five years:

Essentially fee income per employee has reduced significantly, while the overall cost per employee is down by much less. As such, the proportion of fee income being paid to staff has advanced notably — from 36% to 43%.

All told, the employee stats do not suggest any major improvements in productivity of late. And yet CLIG’s board wishes to expand the bonus pool from 30% to 35% of profit…

There is one straw to clutch here — greater funds under management may not need more in the way of expensive staff. During 2011, 68 staff members looked after almost $6bn of client money — or $86m each (versus $56m for 2016).

* At least the accounts appear to be in order

The fundamentals of CLIG’s accounts remain quite satisfactory.

Meanwhile, the cash-flow statement once again displayed little in the way of capital expenditure and demands on working capital:

And despite CLIG’s high wage bill, profitability remains impressive and leads to some appealing return on average equity numbers:

The 2016 annual report includes CLIG’s usual exchange-rate/FUM table, although it uses a 30% staff profit share for the calculations: 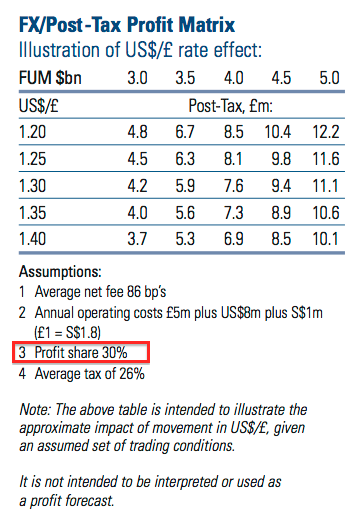 I would have thought a 35% profit share would now be more appropriate.

Anyway, CLIG’s results confirmed that funds under management had enjoyed a welcome 10% advance to $4.4bn since the year-end.

After adjusting for my net cash figure of £10.3m, my enterprise value (EV) for CLIG is roughly £86m or 322p per share. Dividing that EV by my earnings guess gives me a possible P/E of 10-11.

That multiple does not look outlandish at present, although do bear in mind the shares have rarely traded at extended multiples in the past.

At least my 30.2p per share earnings guess supports what could be a lifted dividend for the current year.

The payout has been stuck at 24p per share for six years now and the annual report does hint at a payout improvement: 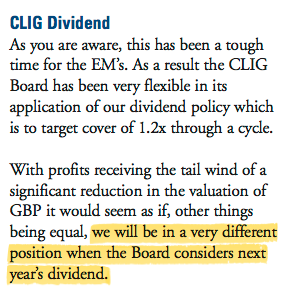 12 thoughts on “City Of London Investment: The Staff Don’t Deserve This Extra Bonus And I Hope It Is Voted Down”