Happy Friday! I hope you continue to find my Blog useful… and that your portfolio is still performing well during 2017.

After experiencing a buoyant start to the year, I am pleased my investments have generally held on to their value during the last few months.

All in all, the recent news from my portfolio has not been too bad, with a few minor share-price gains helping my performance improve to 9.5% for the year so far.

Warning: This could be quite a dull update

If you like your investing blogs to be full of share-trading activity, then you might as well stop reading now…

…because this quarter has been the first since I started this Blog during which I have not bought or sold any shares.

One reason for the lack of activity is that a lot of my time of late has been absorbed by matters outside of investing.

I’ve just about managed to keep on top of my existing holdings, and simply not had the chance to study other companies and publish fresh watch-list reviews.

Furthermore, current market valuations — especially those applied to higher-quality companies or those exhibiting superior growth potential — do not seem conducive to much buying at present.

Plus, I am becoming quite comfortable with how my portfolio is evolving.

You see, some of my past share-trading has involved ditching ‘deep value’ dreadfuls, and currently my holdings almost all exhibit a rich mix of high insider ownership, appealing track records, attractive financials and respectable prospects.

As such, there really has to be a striking opportunity for me to trim down an existing position in order to purchase a new holding.

I publish quarterly updates to round-up what has happened within my portfolio, and this Blog post outlines my April/May/June activity (or in this case, lack of activity). You can read all of my previous round-ups here.

The table below shows how my portfolio has changed since the start of the year:

I have studied updates from eight holdings

As usual I have kept watch on all of my existing holdings — trying to seek out bargain buys just in case.

Here is a summary of the Q2 news:

* Acceptable progress at Castings, Record and S & U.

* Unremarkable or mixed news from Getech and World Career Networks.

The only other Q2 development I can add is my attendance at Tasty’s AGM.

A study of management loyalty and commitment

With no trading or watch-list activity during the quarter, I have decided to use this update to evaluate my holdings on a particular investing theme.

I have always found these types of evaluations to be quite helpful, as they can underline to me the most — and least! — appealing companies within my portfolio.

For this study I have chosen to look at company management. As I have stated in How I Invest (my bold):

“I want my investments to be led by loyal and capable bosses that have served in the top job for several years. I want to see improvements to profits and the dividend throughout their leadership. Better still is the founder/entrepreneur boss, who set up the firm in the first place, has led it ever since and has therefore shown even more commitment to building the business.”

For this study I will be concentrating on loyalty and commitment (through a sizeable ordinary shareholding). I will endeavour to look at management capability and track records in a future Blog post.

I feel these eleven shares are textbook holdings

I’ve ranked my 16 holdings into three groups. Here is group A: 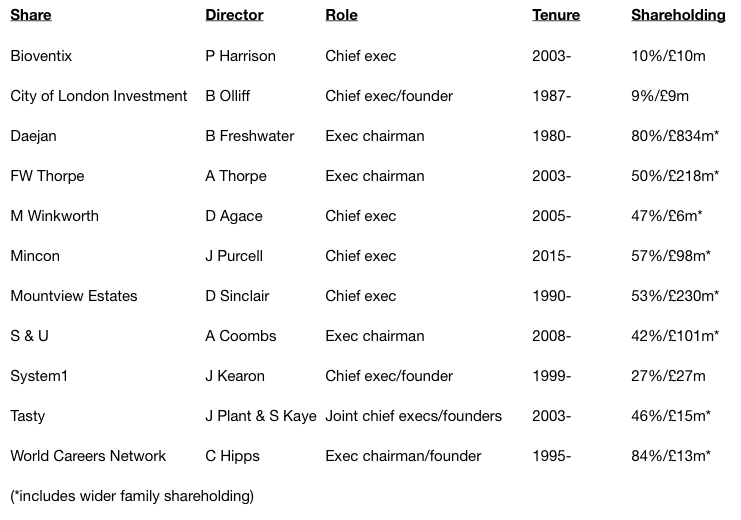 These are the companies where the lead executive has generally been in charge for a long time and has a substantial amount of money riding on the share price.

You may have spotted that Mincon chief exec Joseph Purcell has the shortest tenure as a boss at just two years.

However, he did serve as chief technical officer from 1998 while his father (currently a Mincon non-exec) was in charge between 1977 and 2012. As such, Mr Purcell ought to have a good understanding of how to run the business.

Otherwise, I would say those eleven shares appear to be textbook holdings for me — at least on a management loyalty and commitment basis.

Part of my portfolio relies on these ‘salarymen’ executives

Now to group B:

These are the four holdings where the chief exec does not offer a long tenure or a significant shareholding (or both).

However, what (I hope) saves the day is the presence of a non-exec chairman that boasts either:

I would like to think these chairmen would look to protect their investments (and mine) by appointing a fresh chief exec should the need ever arise. So far at least, none of these ‘salarymen’ chief execs has let me down too badly.

Finally there is group C… consisting of just Getech:

There is no getting away from this… various board changes have left a new chief exec — who owns no shares — running the show.

There’s not even a major shareholder on the board, either. Getech’s founder still holds 10% but he left the company a few years ago.

Years ago I used to believe that traditional business ‘moats’ — such as brands, patents, regulations, economies of scale, network effects, and so on — were the most critical feature of any investment .

But these days, such ‘barriers to entry’ appear increasingly at risk of being challenged by intrepid startups that can use the Internet to gain customers much more quickly than ever before. This investment paper cites a good example of Gillette and Dollar Shave Club.

Over time then, I have become far more convinced about the importance of management to an investment.

Put simply, I’d like to think a business is more likely to enjoy long-term success — and fend off intrepid startups — with a loyal and committed executive at the helm.

(Indeed, a company’s positive and adaptive working culture — instigated by a loyal and committed boss — can in itself be a difficult-to-replicate ‘moat’.)

On the other hand, I am no longer so sure about professional ‘salarymen’ executives, who may be quite happy to run things in a customary way and risk becoming complacent when it comes to fresh competition.

These bosses offered the tenure, but not the talent

Of course, investing in a business that’s led by a long-time executive with a major shareholding is no guarantee of stock-market success.

Looking through my past investments, I recall Electronic Data Processing, French Connection, Instore and London Capital all offered ‘owner-orientated’ directors…

…but that did not prevent those shares losing me money or struggling for years to deliver a gain.

What counts is backing loyal, committed — and capable — bosses. I sadly discovered the leaders at Electronic Data Processing, French Connection, and so on, were not that capable…

As I say, I will endeavour to look at management capability and track records in a future Blog post.

8 thoughts on “Q2 2017: No Buys Or Sells, Plus Business ‘Moats’ Versus Motivated Bosses”