Summary: This time last year DJAN’s management was full of Brexit gloom, but here we are now with the commercial property group declaring new highs for revenue, net asset value and the dividend. Of course, the board’s caution may eventually prove to be shrewd, and I’m hopeful the veteran executives will be able to navigate through any wider property uncertainty — assisted in part by the firm’s relatively low level of debt. The shares trade at 63% of net asset value and I continue to hold. 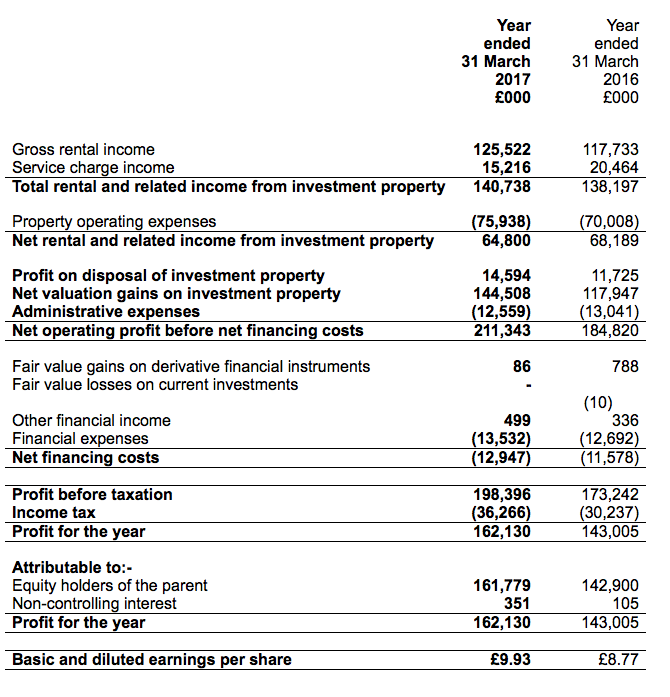 * Another set of record results with NAV surpassing £100 per share

These 2017 figures were accompanied by a little more management text than usual.

This year shareholders were treated to a few extra lines concerning two new director appointments. Here is the full narrative:

Daejan Holdings PLC is pleased to announce the following appointments as non-executive directors:

Mr Chaim B. Freshwater, who is the son of Mr S. I. Freshwater and currently lectures at a London college. His appointment is a further step in our succession planning.”

As usual, the figures were then left to do all of the talking.

However, I must admit one or two numbers within the statement will require the forthcoming 2017 annual report to provide more detail.

I was certainly surprised that total rental and service revenue gained only 2% to £141m, given November’s half-year results had revealed first-half revenue had climbed 6%.

The numbers showed full-year service charge income falling by £5m to £15m, and a quick check back to the 2016 annual report revealed:

“Service charge income has increased due to a number of major works programmes across the UK portfolio together with new lettings.”

I now get the impression the £20m service income reported for 2016 was perhaps bolstered by significant, one-off work.

At least full-year US rental and service revenue advanced 19% to £49m, due in part to the stronger USD:

The lower service income led to operating profit falling 5%, although valuation gains of £145m were impressive and helped pushed DJAN’s net asset value (NAV) to a new all-time high of £102 per share.

Progress was also assisted by currency movements, which added £29m or £1.78 per share to NAV:

With revenue, NAV and the dividend setting new peaks, I guess the Brexit concern expressed by DJAN’s management in the 2016 annual report — “adverse impacts on rental income, capital values, vacancy rates and bad debts” — has yet to materialise just yet.

I wrote in November that DJAN’s first-half operational cash flow looked a little low, and these full-year figures also showed profit not being converted into cash too well.

Indeed, the £13m shortfall between reported operating profit and operational cash flow is the largest since at least 2005:

I had speculated in November that perhaps a few tenants have experienced difficulties paying their rents. I will have to double-check the 2017 annual report to discover whether overdue rents have increased further.

I should add that DJAN’s cash conversion has not been too bad over time. Generally speaking, some 95% of reported operating profit is translated into cash.

Similar to last year, DJAN decided to keep capital expenditure below the substantial levels of 2013, 2014 and 2015:

DJAN’s debt continues to look very manageable. The stronger USD — most of DJAN’s loans are held in the US — was the main reason total borrowings increased by £31m to £352m during the year.

The debts represent just 16% of the £2.3bn property estate.

Although the discount appears sizeable, these shares have rarely traded at close to NAV for years. Reasons for the persistent discount probably include the board’s 80% family shareholding, its unconventional working culture and the complete absence of any takeover possibilities.

Another way of looking at DJAN’s value is from a return on equity standpoint.

During recent 10-year periods, DJAN has earned at least 7% a year from its asset base:

Assuming DJAN can earn an average of, say, 8% a year from its £102 per share asset base, typical annual earnings could be £8.13 per share — represented by a mix of rental profit and valuation gains.

In theory at least, enjoying £8.13 per share a year from a £64 entry price is equivalent to a worthwhile 13% annual return.

Meanwhile, the 98p per share dividend supports a measly 1.5% income.