Summary: These were never going to be great figures from the London estate-agency firm. However, at least WINK outperformed larger rival Foxtons while the favourable economics of the group’s franchising model remain quite clear. True, the immediate outlook for WINK is rather mixed and there is online competition to consider, too. However, all that seems priced into the P/E of 8 and 7%-plus income. I continue to hold. 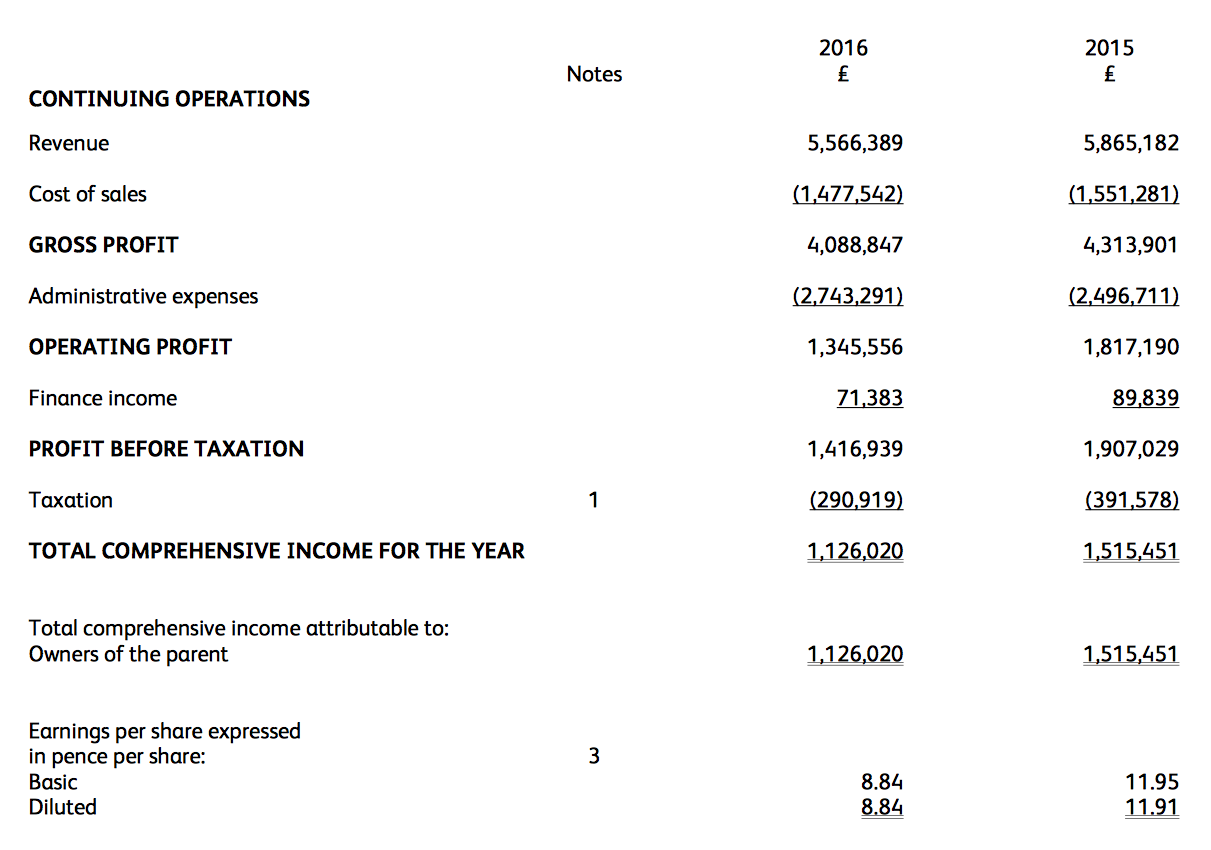 * These results were not great, but at least the group outperformed Foxtons

With November’s trading update containing a “moderate” profit warning and major rival Foxtons (FOXT) having issued glum figures, these results were never going to be spectacular.

In the event, full-year revenue dropped 5% while operating profit dived 26%. Earnings came in at 8.8p per share — their lowest level for four years (I had previously guessed at 9p per share):

WINK blamed the downward performance on Brexit and higher rates of stamp duty, which combined to curtail property transactions and soften rents throughout London. During the year, the group earned 79% of its revenue from franchisees based in the capital.

At least WINK had a better year relative to FOXT:

* On target to meet 50-50 split between sales and rentals

WINK’s first-half/second-half split showed H2 profit having plunged 45% to a level not seen since 2011:

I should add that WINK’s 2015 H2 was the group’s best ever, as buyers rushed to complete transactions before higher rates of stamp duty came into force. As such, the 45% profit plunge could be viewed as a ‘peak to trough’ reversion.

The H1:H2 split also showed the total revenue earned by WINK’s franchisees shifting away from property sales transactions and towards lettings:

WINK has a long-stated target of earning 50% of its income from lettings, which ought to be a more stable source of revenue over time than collecting commissions from property transactions.

While I had hoped this 50-50 split would be attained by lettings income growing significantly to match sales commissions, it appears the target may well be met during 2017 because of WINK’s lower sales commissions.

However, I’m pleased WINK’s own revenue of £5.7m represented 12% of that £46m — sustaining the proportion of last year:

The 12% slice is represented by the standard 8% cut of franchisee sales and lettings income, with the 4% balance consisting of revenue from various franchisee support services alongside franchise establishment/re-sale fees.

I could not spot anything too awry within WINK’s cash flow:

Certainly the group’s capital expenditure continues to be adequately reflected by the combined depreciation and amortisation charge used to calculate reported earnings.

Of the £1.4m diverted into working capital since 2012, I calculate £1m was lent to franchisees (net of repayments). The remaining £400k used for general working-capital purposes does not appear that great when total operating profit during the same time came to £8m.

The lower combined total of cash and franchisee loans meant financial income dropped from £90k to £71k. I had already noted within September’s interims that WINK was earning less from its loans and cash, but the £71k still represented a useful 5% of pre-tax profit.

I should add that, despite the profit setback, WINK’s franchising business continues to earn a very acceptable margin and return on equity:

* A commitment to the traditional, full-service approach

This time last year WINK made its first reference to an “online offering” and this latest statement confirmed the launch of a revamped group website:

“We are also excited about the new website that was launched in March 2017, providing a platform that will enable clients to deal with their properties and interact with us both on and offline. Our experienced local franchisees will be in a position to maintain the high standards of personal service that they provide while offering clients new digital options for communicating, transacting or managing their properties.”

WINK management told me at the AGM that the firm would remain a “full service” agency, and the narrative accompanying these results confirmed that strategy is still intact.

Needless to say, I have pondered for some time whether WINK will suffer at the hands of online/hybrid agents such as Purplebricks (PURP).

My best guess of the future is that traditional agents may see their fees squeezed a little by online alternatives, but won’t endure complete destruction.

As I see things, the major challenge that online/hybrid agents face is being able to grow their businesses without needing as many staff as traditional agents.

You see, an individual estate agent can manage only so many property sales transactions to completion, and the lower fees charged by an online agency could mean its agents have to handle many more customers to earn a decent wage.

And handling more customers may lead to a poorer service, chains falling through… and vendors effectively losing their upfront fee.

Well, at least that’s my view — although I am a WINK shareholder and could be suffering from confirmation bias!

Meanwhile, I have recently stumbled upon Property Industry Eye, which I have discovered to be quite an enlightening industry news website. In particular, the comments beneath the site’s articles are often informative for sector laymen such as me.

For example, I had never really considered why PURP had struggled to make a go of its lettings division. But it seems letting agents require a nearby branch presence because of simple practical issues, such as contractors needing to pick up keys for property access and landlords being unable to host viewings themselves.

That may be why PURP has recently bought a high-street lettings firm, which I thought was an interesting development.

That rating does appear good value to me. Mind you, WINK’s immediate outlook was somewhat mixed. Although the group reckons there will be a “gradual improvement in sentiment” among property buyers during 2017, it expects rents in the capital to soften further.

In the meantime, the trailing 7.2p per share dividend is only 1.2 times covered by my earnings guess — but supplies a 7.2% income.