Summary: If nothing else, REC’s results are consistent — once again this specialist currency manager revealed stagnant financial progress, a lack of new business and a dependence on a handful of major clients. Nevertheless, the group sports high margins and cash-flush accounts,  while the P/E could be as low as 7 thanks to the weaker GBP. Talk of potential special dividends unfortunately remains talk for now, but at least the ordinary payout yields 5.2%. I continue to hold. 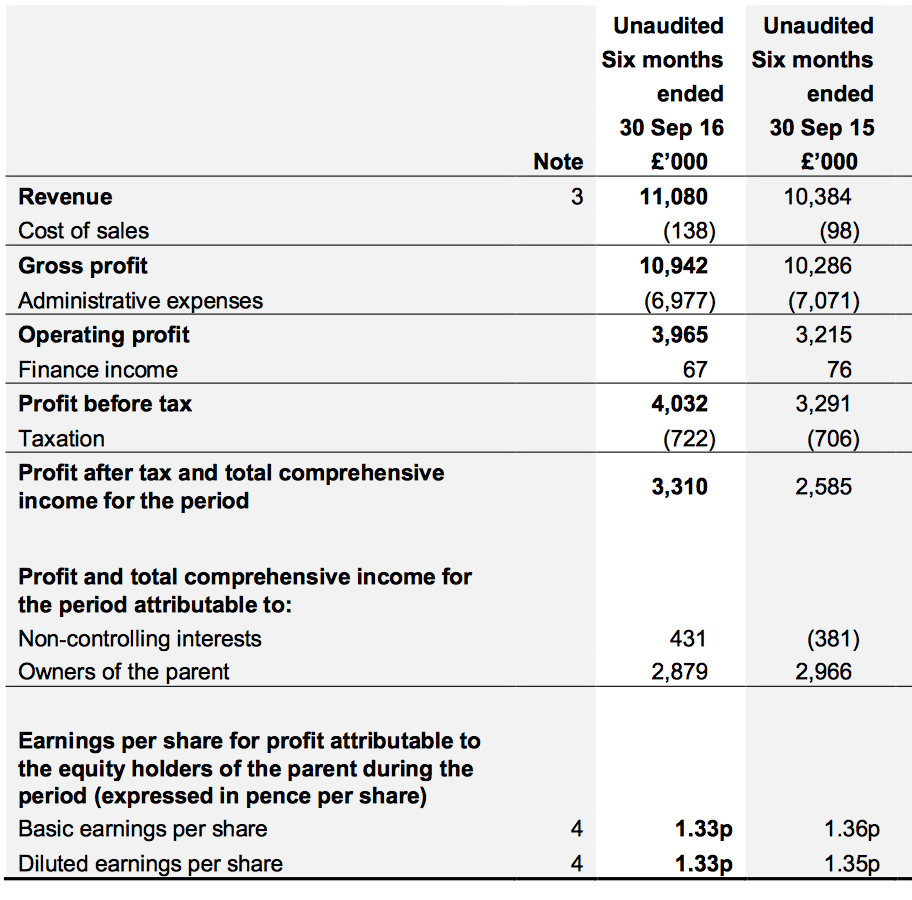 * It appears $800m of client money was not earning any fees

REC used these results to amend how it discloses its effective assets under management (AUMe).

The group introduced ‘Multi-product’ as a new product classification, which covers clients whose mandates involve both currency hedging and “return-seeking” components.

What’s interesting is that client AUMe was previously declared at $55.8b, but under the new disclosure the figure is now $55.0b:

REC claimed that Multi-product mandates are “generally remunerated on a different basis… and hence are not readily attributable into their component parts for AUMe and fee rate purposes.”

The group added: “The new product category recognises such mandates separately and seeks to maintain the link between average AUMe and average fee rates for all product categories going forward.”

However, deep in the small-print REC did admit (my bold).

“AUMe for the Multi-product classification will be based on the chargeable size of those mandates, in order to maintain the clear link between AUMe, fee levels and management fees.”

So it appears that the $0.8bn reduction may be due to certain Multi-product AUMe not earning any fees.

Given REC’s stagnant financial performance throughout the last five years, I suppose I should not be too surprised to learn some AUMe was not generating any income.

At least this change to AUMe disclosure does not affect REC’s revenue or profit — past or future.

* Here are my fee-rate calculations

REC’s first- and second-quarter updates had already indicated these results would not be spectacular.

Reported revenue gained 7% and operating profit jumped 23% — albeit due entirely to foreign-exchange movements and investment gains.

The lack of positive progress was due to clients withdrawing higher-margin Dynamic Hedging mandates, which could not be shored up completely by the extra money arriving into the lower-margin Passive Hedging strategy.

REC stated that its client fee rates had held up:

But my own fee-rate calculations differed to those that REC presented.

Taking the average AUMe for each product classification, and the average £1:$1.37 exchange rate seen during the six months, I arrived at the following rates:

The differences may look small, but they do carry a sizeable impact on REC’s possible earnings. More on that a bit later.

REC’s main profit-seeking strategies all reported positive performances during the first half, and are all now showing positive returns since inception: 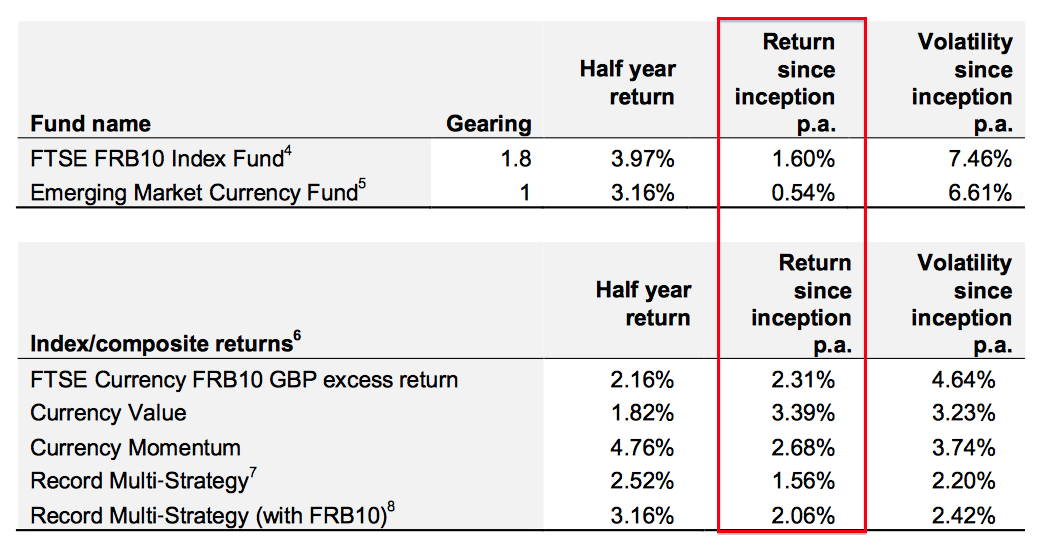 If these positive returns can be sustained during the second half, the current year will be the first since 2013 during which all of REC’s strategies will be able to boast a successful year.

(I note REC’s underwhelming Currency Alpha product was closed during the half).

The positive returns — plus the implications of Brexit on currency markets — has apparently prompted a few extra discussions with potential clients:

“We have seen a growing level of new business discussions, in particular towards the end of the period.

This can be attributed to marked currency volatility on the one hand, and positive performance across all return-seeking strategies on the other.

There is a welcome degree of diversification in the objectives clients are looking to meet.  Client and consultant engagement ranges across passive hedging, active hedging and return-seeking objectives, and in some cases combinations of these.

This is the case across our core markets of the UK, continental Europe, and North America, and in markets we are exploring such as Australia.”

One day I trust the planets will finally align and REC will enjoy a notable influx of money from a broad spread of new clients. The last time such an influx occurred was 2007/8.

I can’t fault the fundamentals of REC’s accounts.

In particular, the H1 operating margin was an impressive 33%.

Cash now stands at £36.1m, which after regulatory capital of £8.5m and third-party-owned investments of £4.2m comes to £23.4m or 10.6p per share. The balance sheet carries no debt and no pension complications.

Sadly there was no sign of REC returning any of its chunky cash pile to shareholders.

Back in June the group had said:

“The Board intends to continue its pragmatic approach; however it now considers the Group’s balance sheet and regulatory capital buffer sufficiently strong to support the consideration of returning at least part of any excess of future earnings per share over ordinary dividends to shareholders, potentially in the form of special dividends.”

But the narrative in this H1 statement simply declared:

“The Board will also give consideration to returning at least part of any excess of the current year’s earnings per share over ordinary dividends to shareholders, potentially in the form of special dividends.”

REC held the interim payout at 0.825p per share and projected the full-year dividend should be maintained at 1.65p per share.

REC continues to be dependent on a small number of large clients (my bold).

Also worth considering are new regulations that involve “mandatory variation margin” — which I believe will require participants that use currency derivatives having to stump up extra collateral.

REC ominously used the term “committing significant resources” to cope with this new rule (my bold):

“Regulatory change continues to be a major theme in the foreign exchange markets.  This half year saw the first implementation of mandatory variation margin rules amongst bank counterparties, with the effects on our clients expected to be felt from the first calendar quarter in 2017.

As previously reported, we continue to be frustrated by differences in rules across jurisdictions.  We are nevertheless committing significant resources to managing the impact of these rules on our clients, and to seeking to mitigate any adverse consequences for our business.

In doing so we are also continuing to explore ways we can generate new business opportunities from these changes, by broadening our product offering in collateral management and in cash management more widely.”

Using my own fee-rate calculations and the latest AUMe, I reckon potential management fees could now be running at £23.7m with £1 buying $1.24:

These H1 results did not highlight any changes to costs, so I’m using the expenses I calculated in June:

After standard 20% tax, my latest sums suggest earnings could be £6.9m or 3.11p per share.  Just before Brexit I was forecasting 1.88p per share  — which just goes to show the effect the weaker GBP may recently have had on translating REC’s substantial non-GBP income.

(Had I used REC’s own fee-rate figures, my sums would show management fees at a hefty £26m and earnings at a somewhat outrageous 3.72p per share.)

REC’s market cap at 32p is £70.8m, which adjusting for my aforementioned surplus net cash and investment figure of £23.4m gives an enterprise value (EV) of £47.4m or 21p per share.

Dividing that EV by my 3.11p per share earnings guess gives an underlying P/E of just 7.

Even if you assume all of REC’s cash is not surplus to requirements — and I must admit, the fact REC continues to hoard cash might suggest it is all needed to reassure clients — then the P/E remains modest at about 10.