Summary: Earlier statements had already signalled lower earnings for 2016/17, and these results were in fact CGS’s worst first-half figures for six years. The engineer still reckons lost work can be replaced, but the immediate outlook remains stagnant at best. The upcoming retirement of the chief executive brings some further uncertainty, too. Still, I don’t think good companies become bad companies overnight and the group’s long track record suggests a recovery will one day arrive. I continue to hold. 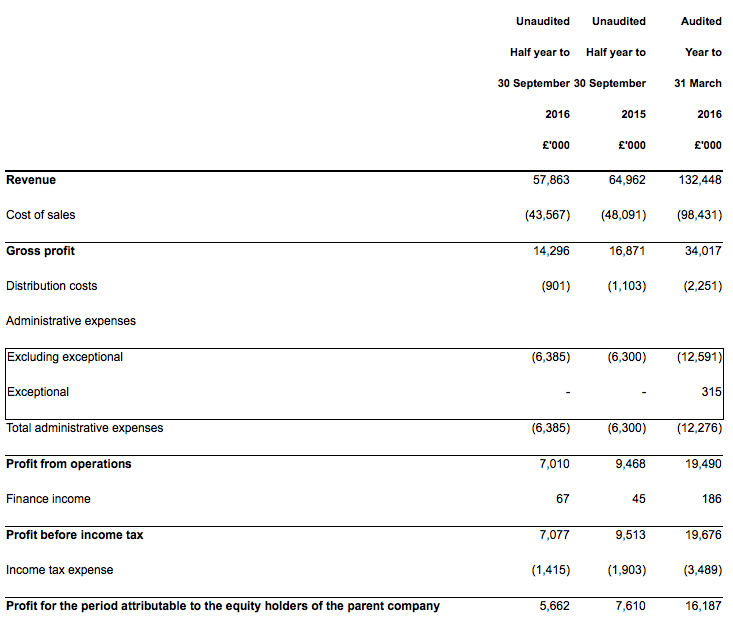 * These results were never going to be spectacular

June’s satisfactory full-year figures had already warned these first-half numbers would not be great.

CGS said at the time that a “major contract” had finished at its machining division, and that the replacement work would not “come on stream immediately”.

Then in August the group confessed within its AGM statement that it had “seen a softening in demand from our main customers”.

In the event, first-half revenue dropped 11% while operating profit plunged 26%.

Notably, revenue at the main foundry division slipped by only £1m to £54.2m, while the associated foundry profit was reduced by just £0.7m to £6.2m.

However, the loss of the aforementioned major contract pushed revenue at the machining division down from almost £10m to less than £4m. Divisional profit crumbled from £2.6m to only £0.8m.

At least CGS reaffirmed the downturn should be temporary: “The introduction of replacement work remains on course for 2017/18 onwards”.

Although the group did counter that by admitting: “The pre-production costs associated with this work is impacting the current financial year.”

At least CGS continues to boast a cash-flush balance sheet.

Despite paying a welcome £13m/30p per share special dividend during the half, cash in the bank remained at a sizeable £23m, or 53p per share.

However, I note capital expenditure during the six months was a hefty £7m — no doubt due to those aforementioned “pre-production costs” in readiness for the replacement machining work.

To put that £7m H1 capex into perspective, expenditure on tangible assets averaged £8m a year between 2013 and 2016.

The books continue to carry no debt as well as a pension-scheme surplus (almost £15m at the last count).

As I have mentioned previously, the pension trustees have agreed to hand some of the scheme’s money back to CGS. It looks as if the amount to be returned has increased to £8m (my bold):

“The pension schemes are related parties of the group and during the period £919,000 (2015 – £1,139,000) was paid by the group on behalf of the schemes in respect of pension payments and administration costs.

I am still unsure as to why CGS continues to pay money into the pension scheme when it is due to receive a refund.

I did my best to deduce what is going on within this earlier Comment (point 5).

* Appointment of a new chief executive

CGS will appoint a new chief executive next year:

Our Chief Executive, David Gawthorpe, has indicated that he wishes to retire at the end of this financial year ending 31 March 2017. In accordance with the group’s succession planning, Adam Vicary, Managing Director of Castings Brownhills, will assume the role of Chief Executive thereafter.”

So I must say, it is a shame such a seasoned director has decided to retire.

Nonetheless, his successor, Adam Vicary, appears to be a useful replacement. In particular, Mr Vicary has worked for foundry businesses since the age of 20 (he is now 48).

Mr Vicary joined Chamberlin & Hill in 1988 and took charge of its foundry division in 2001. He then moved to CGS during 2010 and has since managed its foundry operations.

The foundry operations at CGS have increased their revenue and profit by about 20% since Mr Vicary’s arrival. I hope that performance is a positive omen for his stint as group chief executive.

After subtracting the aforementioned 53p per share cash position from the 390p share price, my estimate of CGS’s enterprise value (EV) comes to 337p per share or £147m.

That rating does not look wildly expensive to me, assuming earnings do indeed recover during the next year or two as the replacement machining work eventually comes though.

In the meantime, though, CGS reckons the second half may mirror the first:

“Whilst we do not anticipate any significant further reductions in output, we do not expect to see any improvement for the remainder of the financial year.”

At least CGS has recovered from worst setbacks before. During the 2008/09 banking crash, operating profit fell from £15m to as low as £4m…

Finally, the interim dividend was unsurprisingly held at 3.38p per share to leave the trailing full-year payout at 13.71p per share. That payment supports a 3.5% income.