Summary: It’s taken me five years to realise that I have wasted my time with FCCN’s purported turnaround. The fashion chain’s latest results were very mixed, and I feel cash may now become tight if there is more bad news. I have belatedly concluded the problem Retail division could well lose money for some years ahead, while an activist investor may not be doing enough to instigate the necessary board changes. I have sold my entire holding. 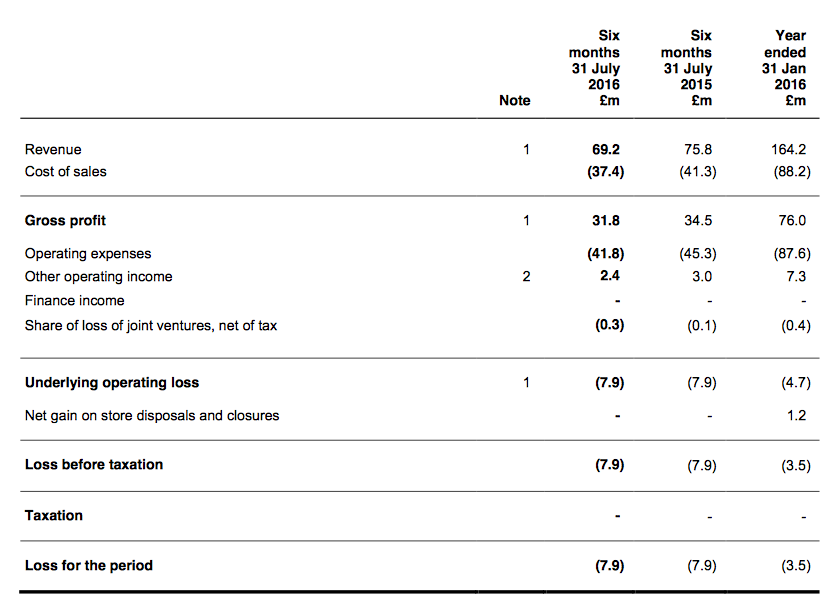 This time miserable shareholders were told of welcome improvements on the Retail side…but also faced shock setbacks within the Wholesale and Licensing operations.

The very mixed performance meant a repeat of last year’s £8m H1 loss and net cash shrinking by £6m to £8m. Unless a swift turnaround occurs, I reckon the group’s cash position could hit zero within the next twelve months.

The prospect of this hapless, loss-making business taking on debt or raising equity to fund its protracted recovery is not a pleasant one. More on that in a minute.

* I never thought the Retail division would be the results ‘highlight’

The highlight — using the broadest meaning of the word — of these H1 results was the Retail division.

Although total revenue from the group’s high-street shops fell by £1m to £42m, the associated losses were trimmed by £3m to £8m due to better like-for-like sales and the closure of five under-performing outlets.

Closing five outlets was ahead of FCCN’s earlier projection of abandoning three or four stores in the current year. Another five units are set to be closed during the second half, too.

However, giving me a reality check was the City presentation that accompanied these results.

This presentation disclosed FCCN’s plans to still have approximately 40 UK/Europe shops left open by January 2020 (there are 69 at present).

Trouble is, I am not sure whether the Retail division with 40 stores would actually break-even.

You see, here is a snippet I picked up from the last AGM:

“The Regent Street site was losing £0.5m a year, and was one of FCCN’s 3 big losing stores. The Oxford Street store loses money but not as much. The estate has lots of stores that lose a little money, and there are some stores that do make a profit (generally in smaller towns).”

So if Regent Street was losing £0.5m a year and was one of FCCN’s three worst sites, how did the entire Retail division lose £13m during the last twelve months?

The answer (I presume) is that the divisional loss includes sizeable logistics, warehousing and other non-store expenditure, which will continue to occur whether there are 69 shops or 40.

I have gradually realised that closing a few non-performing stores may not make much of a dent in these support costs. And so there is the real chance that the Retail division may be losing money for some years to come.

Indeed, it is a sad fact that the Retail division last made a respectable profit during 2005, after which it broke even for two years and then has been stuck firmly in the red for next nine.

As such, I remain convinced that shutting the Retail division entirely is the only way for the wider group to return to profitability for the long run.

Sadly, FCCN’s management appears to think differently — the City presentation revealed: “New store openings [are] planned in Manchester and London Liverpool Street for the beginning of 2017” :-(

* Shock Wholesale and Licensing setbacks… but both seem fixable

FCCN’s Wholesale and Licensing divisions have been reliably profitable for years and have shown that the wider group does have some sort of value.

So it was very disappointing to see both of these divisions report surprise setbacks in this H1 statement.

At least there is hope of rebounds at both divisions. Wholesale orders have improved during recent weeks, while the new licensee ought to bring a “long-term benefit”.

Today’s results reminded us that FCCN received £2.4m compensation for the closure of its Regent Street store in London, so in reality the underlying cash outflow was more than £8m.

For the first time I can recall, FCCN has referred to “undrawn working capital facilities of £5.5m” — which I guess is to reassure shareholders that the business doesn’t have to arrange an emergency overdraft just yet.

But the reference to undrawn facilities does indicate the business is now facing up to going into the red. This table from the City presentation shows the H1 cash low at £4.7m:

Last year FCCN’s cash pile shrank by £9m and a repeat performance during the next twelve months will see the cash pile disappear entirely.

I have to admit, effectively going overdrawn is a worrying prospect for a business that has lost money in seven of the last eight years.

* 8% shareholder Gatemore “respectfully requests” to meet with the board

8% shareholder Gatemore Capital outed itself as a dissatisfied investor during the summer when it published this open letter.

It appears Gatemore’s polite attempts to meet FCCN’s directors and instigate some changes have all been rebuffed.

I wonder why Gatemore did not send a representative to the AGM. All the directors were present and some sort of discussion could have been pursued there.

While I was pleased Gatemore has tried to engage with FCCN, I thought the investor’s remarks on the “primary issue” of gross margins were a bit fanciful.

Gatemore reckoned FCCN could improve gross margins by “only” 5 percentage points (my bold):

Had FC achieved only 5% better gross margins on the same level of sales, it would have swung from an operating loss of £4.7 million to an operating profit of £3.5 million – without any further improvements to the business and all else being equal.”

Gatemore appeared to suggest returning to 51% group gross margins could be achieved within the next year or two by reducing the group’s large range of dresses (apparently fashion buyers can suffer from “decision fatigue”).

It is not clear the extent of Gatemore’s expertise in fashion, but I reckon FCCN’s problems have been much more to do with having a consistently unattractive and over-priced product range.

The issue Gatemore has skirted around in its letter is the fact that FCCN’s board requires radical changes.

The retailer has recorded losses in seven of the last eight years and the two executives that have overseen this shambles — founder/chairman/chief executive Stephen Marks and operations director Neil Williams — clearly need to go.

Removing them will be difficult, though, as Mr Marks holds 42% of the shares. The only way I can see Gatemore forcing the issue is to find a replacement chief executive for FCCN, seek public support from other large shareholders… and request an EGM to initiate the changes.

As I see it, polite letters to FCCN HQ just won’t be enough… and private investors hoping for more may well be left disappointed.

Three issues prompted me to sell all of my shares after these results:

1) The ongoing losses in the Retail division and my gradual realisation of the significant support costs associated with FCCN keeping a high-street presence;

2) The shrinking cash pile and the danger that another upset could see the business require extra funding, and;

After selling 28% of my holding for 62p in March 2014, I had tried to persevere with this recovery story…but I just don’t sense FCCN, Mr Marks or Gatemore will do enough to create a sustainable return to profitability in the next few years.

In the meantime, there is a growing risk that FCCN’s cash may become tight and balance-sheet problems could occur. I just can’t take the chance of Mr Marks remaining defiant and taking the firm down with him.

So I am out completely at 40p… and hope now to spend some time looking to reinvest in more reliable and owner-friendly businesses!

7 thoughts on “French Connection: I Have Finally Given Up On This Turnaround”