Summary: A very satisfactory set of record figures from this lighting specialist, underpinned by last year’s Dutch acquisition that appears to have delivered 75% annualised profit growth. TFW’s other two divisions reported positive progress, too, while the balance sheet remains awash with surplus cash and investments. Although the near-term valuation appears rich, the group’s decent financials, illustrious dividend and veteran board remain very captivating. I continue to hold. 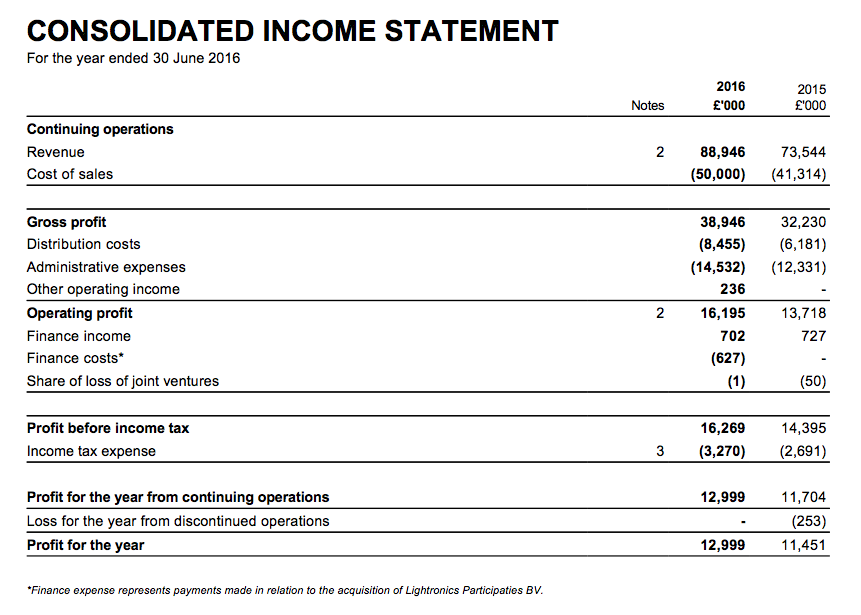 * Respectable progress with a superb performance from Lightronics

Excluding the contribution from last year’s Dutch acquisition, 2016 revenue gained 4% to £73.4m while operating profit advanced 6% to £14.1m. That rate of expansion essentially matched the 5% underlying growth reported during the first half.

The performance of the acquisition, however, was the statement’s highlight.

Purchased during April 2015 for an initial £6m, Dutch outdoor-lighting specialist Lightronics had reported revenue of £10.9m and an operating profit of £1.2m for 2015 (during which TFW owned Lightronics for three months).

These 2016 results, however, showed Lightronics delivering revenue of £15.5m and an operating profit of £2.1m.

Lightronics was rather modestly described by TFW as having “performed very well” following the 42% revenue leap and 75% profit surge.

I noted within TFW’s interim results that the Dutch subsidiary’s performance had been helped by some “one-off projects”, but even so its achievement for the full year was superb.

I calculate these annual results would have shown underlying revenue up 10% and underlying operating profit up 12% had Lightronics been owned throughout the last two years.

At the half-year stage I felt progress at TFW’s main Thorlux division had stalled. However, I now see the division enjoyed a better second half profit-wise:

This latest statement acknowledged Thorlux’s annual revenue was flat, in part due to the loss of “regular business” worth £1m.

The reduced “inefficiencies” allowed Thorlux’s full-year operating margin to return to a splendid 20%-plus.

Here is the H1:H2 split for the combined Thorlux/‘Other’ companies:

Sadly there was no repeat of the 2p per share/£2.3m special dividend witnessed at the interim stage — although TFW could have easily afforded to repeat such a payment.

You see, full-year cash flow was once again exemplary with reasonable capital expenditure and modest working-capital movements. The cash flow bolstered year-end net cash and investments by £5m to £37m:

Adding on TFW’s various other surplus financial assets, and then subtracting the outstanding Lightronics earn-out, the overall net cash and investment position comes to £39m (34p per share) — equivalent to three times this year’s £13m earnings.

The full-year ordinary dividend was raised 11% to 4.05p per share — and was covered a sizeable 2.8 times by earnings. I calculate the dividend has now been lifted for 14 consecutive years, during which time four special dividends have also been paid.

A quick check on the group’s operating margin and return on average equity ratios showed respectable percentages for last year:

However, both ratios have reduced over time due to the aforementioned “inefficiencies” at Thorlux and the acquired intangibles associated with the purchase of Lightronics and another lower-margin subsidiary.

Then adjusting the present £278m market cap (at 240p) for the group’s net cash, investments and the Lightronics earn-out, I come to an enterprise value (EV) of £238m or 206p per share.

I suppose that upbeat multiple is understandable given the recent performance of Lightronics and the chance this particular division could help deliver double-digit growth for the wider group in the coming year.

TFW’s veteran management is “cautiously optimistic” about the near term, too, which is about as positive as the cagey board ever gets. I trust this management outlook bodes well for shareholders.

Meanwhile, nobody will become rich from the stingy 4.05p per share dividend, which translates into a 1.7% income at 240p.

4 thoughts on “FW Thorpe: Record Results Once Again As Dutch Division Shoots The Lights Out ”