Summary: A very pleasant statement from this drill manufacturer, which confirmed earlier trading improvements had been sustained. Indeed, revenue, profit and — very importantly — cash flow, all advanced to seemingly defy the mining-sector downturn. I just wonder if the recent appointment of Joe Purcell, son of the group’s founder, as chief exec has had an immediate impact. Profit extrapolations are now showing an interesting valuation and I continue to hold. 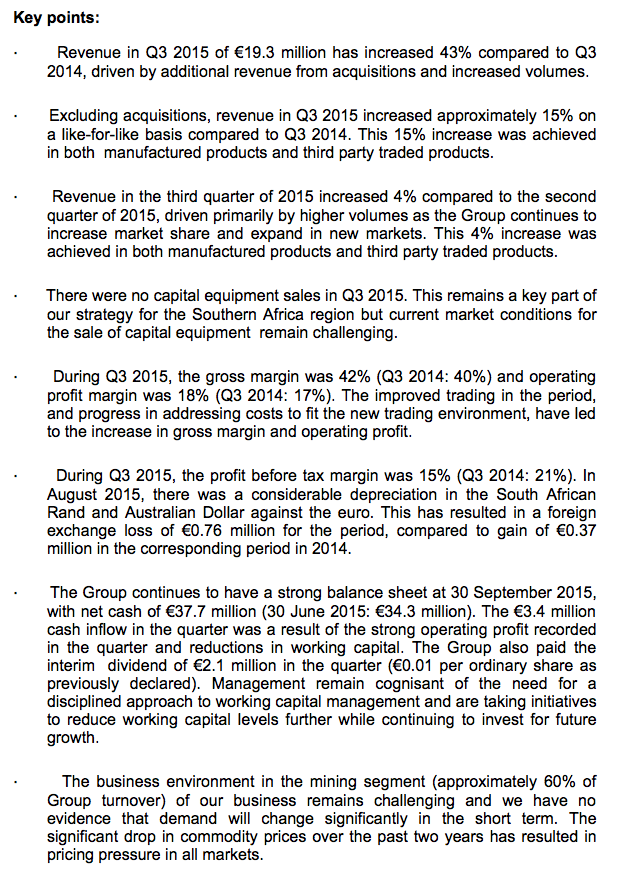 * Improved trading has continued through the year

August’s interim results had already shown Q2 improving on Q1, and I was pleased to see Q3 recording further progress.

MCON confirmed its greater revenue had been driven “primarily by higher volumes as the Group continues to increase market share and expand in new markets”. Meanwhile, the profit improvement was achieved in part by “addressing costs to fit the new trading environment”.

All told, it was a very encouraging performance — especially as 60% of group revenue was earned from manufacturing drills and bits for the battered mining sector.

Today’s statement and earlier updates have allowed me to construct the following tables (some figures are estimated):

Today’s update saw MCON disclose its quarterly operating margin for the first time — the reason being because the firm had suffered a notable foreign-exchange loss during August:

The cost of such foreign-exchange movements are accounted for within the financing section of MCON’s income statement, which explains why the Q3 pre-tax margin fell from 21% to 15% on the year.

Anyway, I have to say operating margins at 18% look superb for a business where a substantial part of trading “remains challenging” and has resulted in “pricing pressure in all markets”.

A clear positive from today’s statement was the commentary on cash flow:

“The Group continues to have a strong balance sheet at 30 September 2015, with net cash of €37.7 million (30 June 2015: €34.3 million). The €3.4 million cash inflow in the quarter was a result of the strong operating profit recorded in the quarter and reductions in working capital. The Group also paid the interim  dividend of €2.1 million in the quarter (€0.01 per ordinary share as previously declared). “

I had previously cited MCON’s wayward cash generation as one of the drawbacks to its business. However, it appears the managers have now started to reverse what had been a poor trend.

Adjusting for the dividend, some €5.5m of cash was produced during Q3 — versus my earnings guess of €2.7m. Most of the difference ought to be a favourable working-capital movement, which will help offset the quite unfavourable movement witnessed during the first half.

* Is the acquisition strategy starting to bear fruit?

As far as I can tell, this cash pile all remains earmarked for acquisitions and MCON says it is “continuing discussions with a number of potential acquisition partners with a view to extending the Group’s product range and adding new customers and new geographic markets”.

During the 18 months to June 2015, the group spent €10m on purchasing smaller subsidiaries and I wrote back in August that there were “still no obvious signs that the corporate activity has enhanced returns for shareholders”.

However, after this encouraging statement, I now wonder whether the financial benefits of the acquisition strategy are beginning to peep through.

Taxed at the 21% applied during the first half, current-year earnings could then be £6.6m or roughly 3.1p per share.

Then dividing that 42p per share by my 3.1p per share EPS guess gives a multiple of around 13-14 at the present 55p offer price.

Alternatively, assuming the Q3 performance can be sustained for the next twelve months, then my earnings guess comes to 3.7p per share and the underlying P/E would be around 11-12.

Were further profit improvements to actually occur, that latter rating would not look too excessive.