Summary: The hapless restaurant chain delivered a rather dismal — but not completely disastrous — set of first-half figures. “Unfavourable” weather was partly blamed for underlying sales falling approximately 4%, which in turn led to an operating loss. The numbers also carried a further substantial write-down while net debt jumped following adverse cash movements. But recovery hopes still remain — costs have been cut, menus have been re-jigged and some sites are even “outperforming expectations”. I continue to hold. 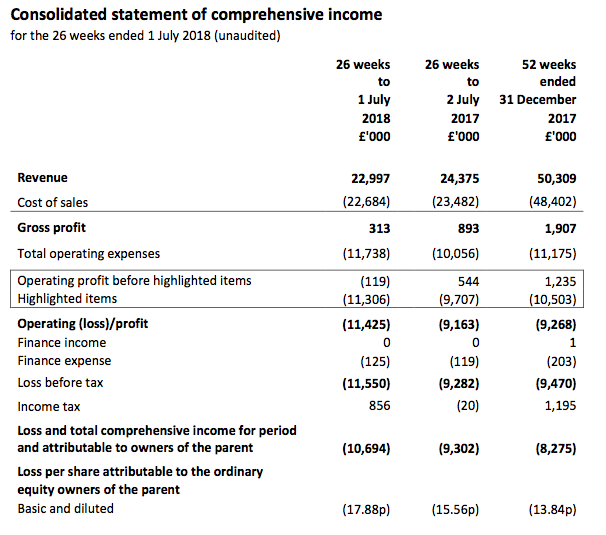 * Profit turns to loss as sales dive and margins are squeezed

I was not expecting any fireworks from these first-half figures, and TAST duly delivered a rather dismal — but not completely disastrous — performance.

Total revenue fell 6% due to “challenging” trading conditions, “unfavourable” weather, the World Cup and the sale/closure of certain sites. In turn, the thin profit of last year turned to a loss as margins collapsed further:

I must confess, the figures were disappointing after the second-half ‘glimmers of hope’ I mentioned back in March. 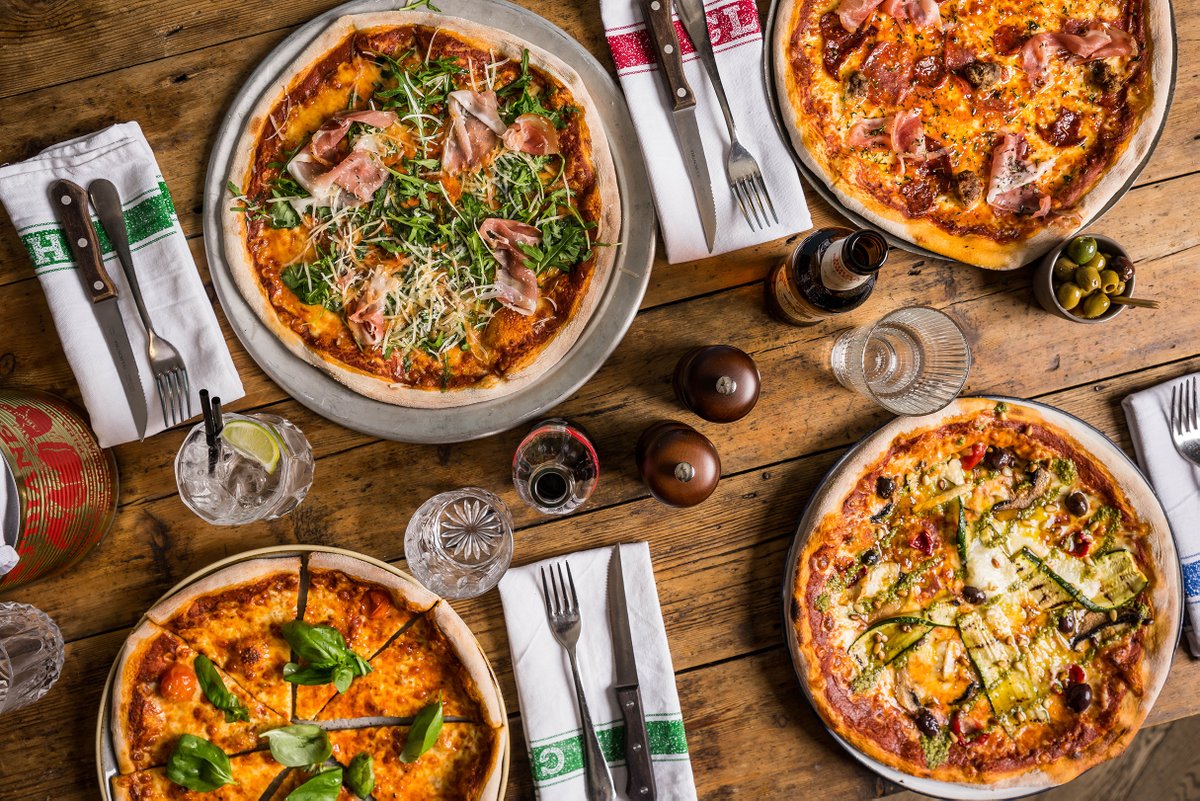 My sums suggest the average TAST restaurant generated annualised revenue of £742k during this first half — down 4.1% on the comparable half of 2017.

TAST’s performance was reasonably similar to the 3.7% like-for-like sales decline experienced by sector barometer Restaurant Group for the same 26 weeks.

Mind you, other restaurant chains continue to fare well despite the industry’s woes. Wagamama for instance reported like-for-like sales up 7.4% during the 53 weeks to 29 April 2018: 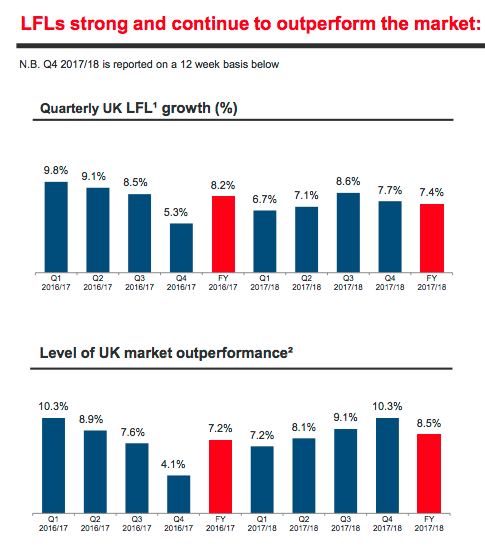 * I did not expect to read the words “outperforming expectations”

At least TAST’s directors continue to follow up the action items listed within the 2017 annual statement.

In fact, this latest RNS contained the words “outperforming expectations” — which I certainly did not expect to read within TAST’s results anytime soon:

“Rationalise the estate
In the light of the changes to the general trading environment, we are continuously assessing our estate to identify where improvements can be made. Our estate is made up of a growing number of sites which are outperforming expectations and we will continue to invest in those restaurants. Where sites are underperforming, we are implementing turnaround strategies and in many instances, we have witnessed significant improvements.”

The closure of TAST’s sole Centuno restaurant was not mentioned within the statement.

I had hoped this new dining format could have inspired a rebranding of some of the group’s struggling Wildwood outlets.  However, management has told me that, while Centuno’s food had impressed many customers, the economics of the menu and the Highgate site could not combine to produce an adequate return.

TAST introduced a revised Wildwood menu during July, although the changes were not too radical:

“Food offering
Menu development and improvement is integral to our strategy to keep the brand relevant. We continue to innovate and review and are constantly looking at ways of making the offer more exciting including vegan and gluten free menus.” 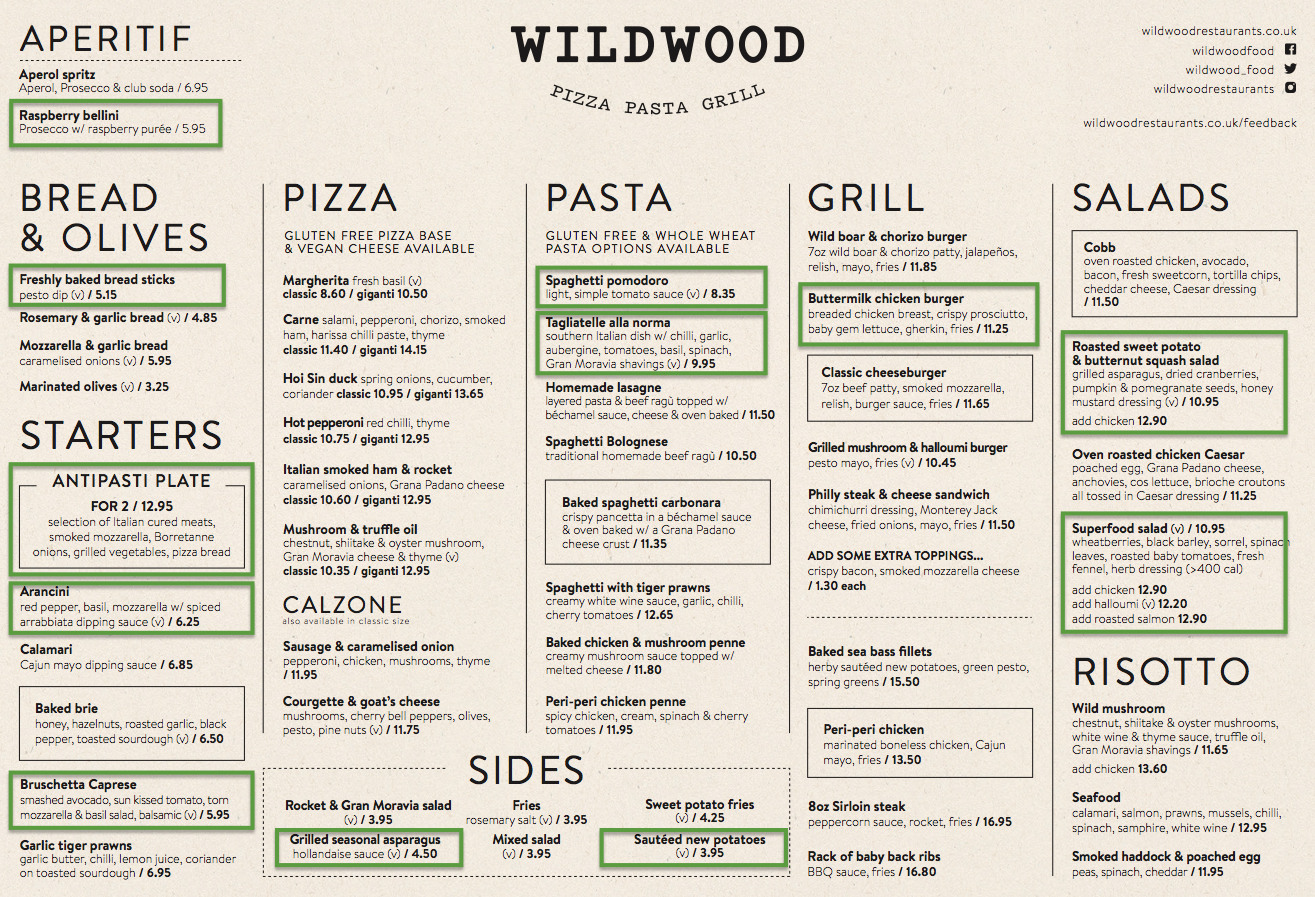 And the red boxes highlight the dishes now culled: 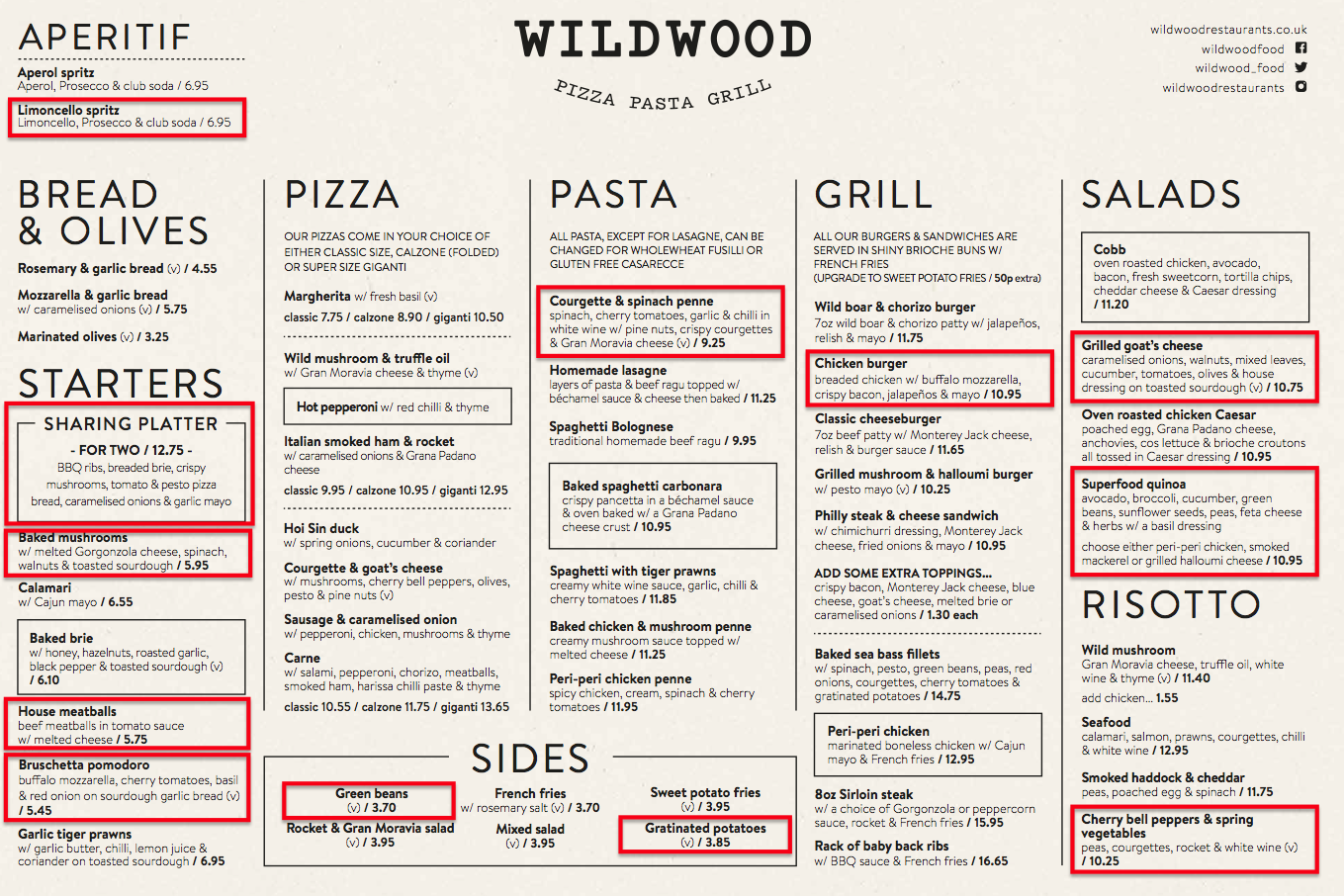 Notable within these results was the aforementioned ‘Food offering’ replacing  ‘Re-connect with customers’ on management’s to-do list.

“Re-connect with customers
The Group identified that customer engagement was too low in a number of areas including feedback on service, feedback on food and customer communication via social media.  The marketing department has been strengthened in 2017 to facilitate changes in these areas.”

There was no similar statement this time.

Indeed, during the summer TAST’s social-media activities were reigned back and discount promotions no longer landed in my inbox. I had assumed TAST was becoming less dependent on tightwad diners to make up its cover numbers…

…but then a new-look marketing email arrived just the other day — which mentioned a 30%-off food voucher.

I suppose giving up the discount vouchers has proved too difficult for TAST, and I continue to speculate whether many of the chain’s diners will ever pay ‘full price’ again.

At least there are cost reductions on the way:

“Investing in our Structure
We have restructured the operational team to improve efficiency and reduce costs. This has resulted in annualised cost savings of approximately £300,000 per annum and a more responsive and motivated team with a greater focus on cost control and sales growth.”

I am hopeful the £300k savings will soon emerge and help TAST return to profitability.

These results carried another sizeable round of exceptional items:

Some £10.3m of property, plant and equipment was written off during the half, and followed £9.5m written off during 2017. TAST reported fixed assets of £34m at the start of 2017 — which implies almost 60% of the money spent on creating the restaurant estate has effectively been wasted.

I suppose the write-offs may also mean nearly 60% of the group’s sites now have little hope of ever reaching their original profit potential. Each outlet currently sports an average £228k book value. 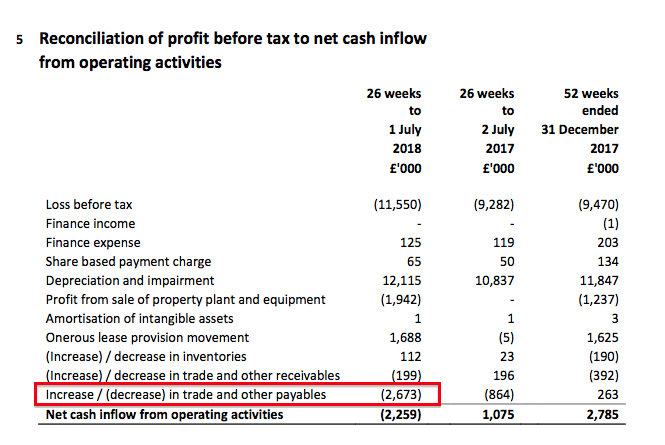 I can only trust the outflow is purely a timing issue (enquiries have been made). However, I do wonder whether suppliers have tightened their credit terms given the high-profile closures within the restaurant sector.

At least the £4m proceeds from the various site sales announced six months ago were collected. I also note first-half capex was just £670k — below (my estimated) £931k depreciation charge.

“We continue to seek to optimise our capital structure with a view to utilising the proceeds of property disposals to reduce gearing.  We are also continuing to review our funding arrangements and as a result, we have decided to reduce our funding costs by cancelling the unutilised £5 million Revolving Credit Facility, that was previously earmarked for new restaurant openings. This will reduce financing costs by circa £35,000 per annum.”

I guess “continuing to review our funding arrangements” does not rule out raising money by issuing more shares. The annual report small-print did nothing to rule out an equity raise either.

I have to admit, a share placing would seem quite likely should net debt stay at £4m and losses continue. I can’t say raising extra money will do much for the share price.

Back in March I wrote:

“The present [£8m] valuation can hardly be described as expensive… assuming that is:

Oh dear. Six months on, profits have turned to losses and net debt is £3m higher than I had expected. Right now I can only trust the board’s action plan will quickly reinstate profits and generate enough cash to reduce those borrowings.

In the past I have mentioned the following recovery scenario: closed units cut revenue by 20% to £40m and other actions help improve the group’s operating margin to 5% and generate a £2m operating profit.

Right now, you could argue the present £13m enterprise value (market cap plus net debt) prices in some of that recovery scenario.

TAST’s outlook was not overly positive, but nor was it terminal:

“Market conditions remain difficult, but we are starting to see the benefits of the infrastructure changes that have been, and continue to be, implemented. Our focus will continue to be growing sales and maximising value… The Directors believe that  our restaurants are appealing to customers and, once the economic climate has improved, the Group is well placed to resume growth.”

A lot now rests on TAST’s second-half performance — I would just be happy if sales can stabilise, profits can be restored and debt can be reduced to lower the chance of an emergency fund raising.

For the last eighteen months I have banged the drum for the Kaye family management, which in total owns 40% of the business and has already built and sold multi-bagger chains ASK Central for £223m (in 2004) and Prezzo for £304m (in 2015).

Suffice to say, my TAST conviction remains dependent on the Kayes. I just hope I will not have to bang the drum for another eighteen months before any proper evidence of a turnaround appears.