Summary: A series of poor updates had already heralded what SYS1’s founder described as a “miserable” performance. However, shareholders did receive a candid explanation of what went wrong — with a Warren Buffett-backed bid to buy Unilever taking some of the blame. However, a greater concern is whether SYS1’s pioneering market-research techniques remain that pioneering — the competition is apparently catching up. A lot now rests on whether SYS1’s founder has the ability to lead another recovery. I continue to hold. 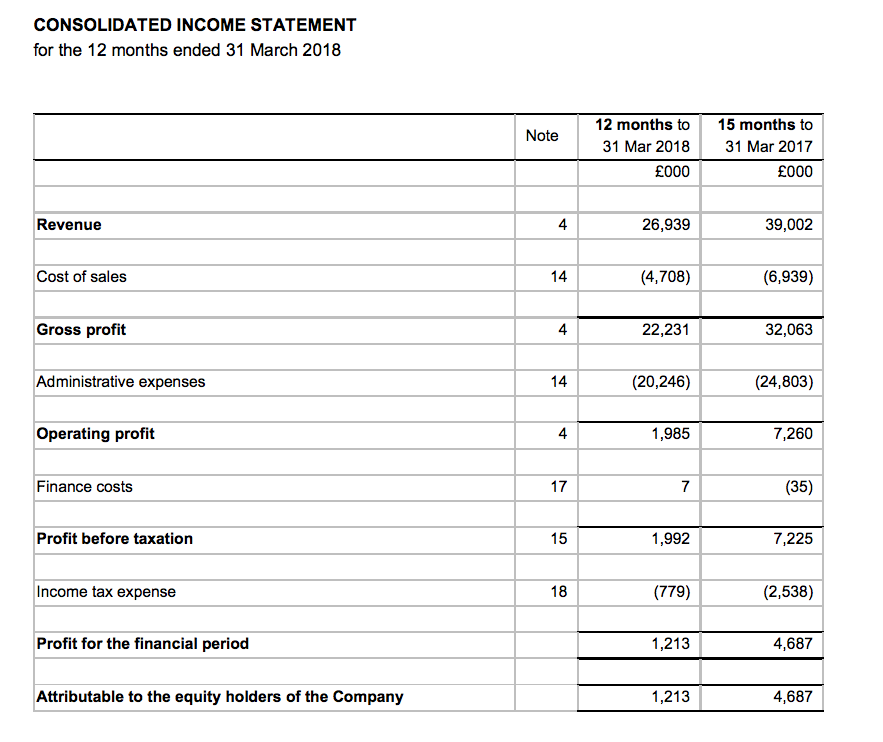 * Profit down 72% but second half shows lower costs

These 2018 results were never going to be great.

A profit warning in August set the tone for the year, with poor interims issued during October being followed by another warning in January.

A statement during April then indicated pre-tax profit would come in between £1.6m and £2.0m. In the event, SYS1 reported a pre-tax profit at the top of that range, albeit down 72% on last year’s effort.

The performance resulted in SYS1’s lowest earnings since 2012:

At least the ordinary dividend was maintained at 7.5p per share.

The half-year split showed a much weaker second-half gross profit compared to the bumper H2 of 2017:

However, cost savings made during the second half improved H2 margins a little. Management also claimed administration costs during this coming year should be no more than last year.

SYS1’s statement helpfully disclosed the group’s quarterly gross profit levels. It appears the weaker second half was due mostly to a poor third quarter (covering October, November and December):

When SYS1 issued a profit warning in 2012, the group blamed the shortfall on clients not spending their “unused budgets” during November and December. I dare say the latest round of client cutbacks (see below) also curtailed the spending of “unused budgets” towards the end of the calendar year.

The silver lining of these results was the candid management narrative. Shareholders received a comprehensive explanation for the profit setback, with founder/chief exec John Kearon even going as far as describing the year as “miserable”.

Refreshingly for a public company, the board admitted responsibility:

“Having been a leading advocate of innovation and change over 17 years, we have to hold our hand up and admit we were slow to see the speed and scale of what was happening around us.  We also have to acknowledge the painful consequences on revenues, profits and morale, for all concerned.”

The board then cited a Warren Buffett-backed bid for Unilever for prompting the client cutbacks:

(Unilever became a significant SYS1 shareholder during 2003 and I understand has been a notable client ever since.)

SYS1 claimed its “creative, discretionary” services had borne the brunt of the ‘FMCG’ budget constraints. The total number of projects slid 6%, the average project value fell 13% and the number of clients dropped 9%.

Somewhat ominously, SYS1 admitted the cutbacks may not be temporary (my bold):

“The realisation that client budget-cuts were significant and probably permanent galvanised us to react, rethink and reinvent…”. 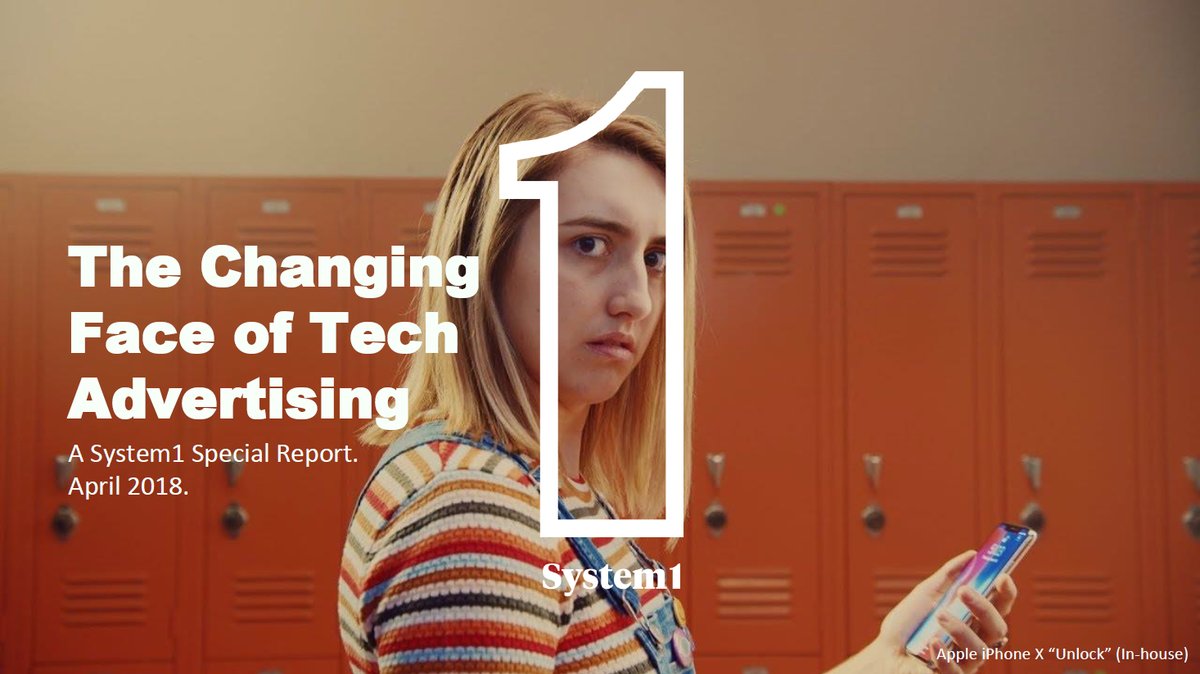 One interesting project is to use the new automated procedures to rate every UK and US television advert, with clients accessing the verdicts through an online subscription service. The new service — to launch later this year — will apparently be “dramatically better, cheaper and faster” than any existing alternative.

Management confessed the group’s name change had not helped matters:

“The effect of these market shifts was compounded by the change in the Company’s name from BrainJuicer to System1, and also by some leadership reorganisation, causing the business to look more at internal issues, and focus less on clients, for a period earlier in the financial year.”

However, I am more concerned that the problems may be due to growing competition…

* No references to competitive ‘moats’ this year

“The shifts in the market towards lower cost automated solutions where data is viewed as a commodity is likely to continue unabated, and will continue to put pressure on the Company’s services.

Furthermore, competitors are increasingly adopting the behavioural science approaches that the Company has been advocating over many years.”

In the past, SYS1 had exhibited some confidence about its competitive advantage.

The following paragraphs are extracted from the 2014 annual report, and generally refer to the development and analysis of extensive research databases (my bold):

“The main foreseeable threat to our business is the risk of large competitors embracing the new thinking from behavioural science. In our view this would require some radical changes, as, for example, it would negate the current advantage of their extensive normative databases of existing measures.”

“Copy-cat challenges to BrainJuicer are more likely to come from smaller agencies. However, it would be hard to replicate our techniques, given the need to copy our question types (which, in some cases, have copyright protections), develop the algorithms which translate respondent feedback into meaningful scores, validate the scores, populate the normative databases, and then explain to clients why the techniques are the same as a competitor’s.”

“We will continue developing the business as we have been, and in this way, will continue to build what some call the moat, or competitive advantage, protecting our business. The more projects we undertake, the more our normative database of emotional metrics will grow, the greater the validation of our solutions, the more credible and valuable our solutions will become. The more we hone our techniques and expand their applicability, the more difficult they will be to replicate.”

It appears some rivals may have now replicated SYS1’s databases — or at least developed something quite similar.

Reacting to fresh competition is what SYS1 describes as “successful adaptation to change, [which] requires bold ideas, grit, creativity and a great deal of hard work”.

The reality, though, is continual and seemingly substantial product changes — which you would not necessarily expect from a business with a true competitive advantage.

“We launched two new product iterations in September (a Next Generation Predictive Markets product and a new Digital (Advertising) Content Tracker), and are due to launch our Next Generation Ad Testing product in January 2018.”

Yet this latest statement made no mention of those product updates.

Reflecting the “successful adaptation to change”, I see SYS1 has decided once again to rename its operational segments. The group’s three divisions are now called Communications, Brand and Innovation: 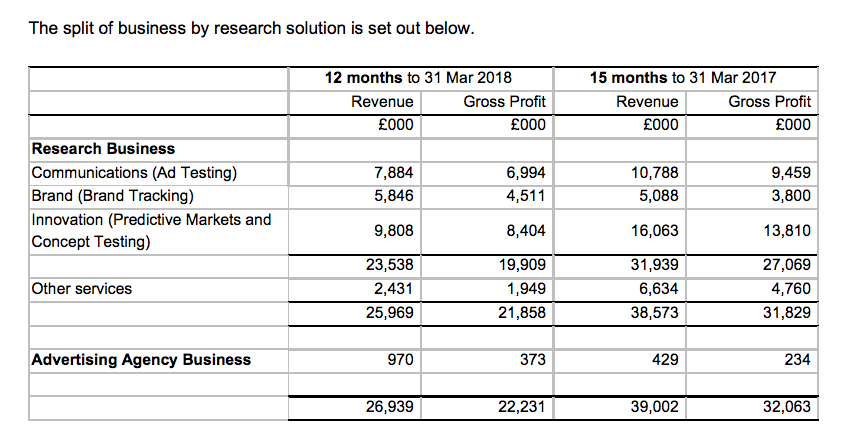 The segmental reporting has now altered in each of the last five years.

The profit shortfall has meant SYS1’s accounting ratios are no longer as attractive as they once were.

That said, the group’s operating margin and return on equity figures are still not too bad in light of the disappointing performance:

(*15 months **operating profit as a proportion of gross profit)

Cash capital expenditure continues to be more than covered by the depreciation and amortisation charged to the income statement. Meanwhile, working-capital movements once again produced a favourable cash inflow.

SYS1 continues to operate without debt and remains free of any final-salary pension obligations.

My valuation sums are not straightforward.

i) Overheads were cut through the year, so the higher H2 profitability could be a more representative guide to immediate earnings;

iv) About 40% of profit (before central costs) emanates from the United States, where the tax rate has been cut from 35% to 21%.

Taking the optimistic view and doubling the H2 operating profit, ignoring the redundancy and start-up costs, and guessing the group tax rate drops from 39% to 33%, I arrive at a £3.2m operating profit and earnings of £2.2m or 17p per share.

Dividing that 254p by my 17p per share earnings figure gives a P/E of almost 15.

I have to admit, that multiple does not tempt me given my cheerful profit assumptions and SYS1 stating:

“The market is in a state of change and the Company itself is in a period of transition as it endeavours to sell-in its new product offerings.”

Nevertheless, the aforementioned Mr Kearon did oversee SYS1’s recovery from its difficult 2012 — operating profit had almost quadrupled by 2017 — and I can only hope his irrepressible enthusiasm, 19-year leadership experience and 27%/£10m shareholding can support another turnaround.

In the meantime, the ordinary 7.5p per share dividend supports a 2.5% income.