Event: Annual results and shareholder presentation for the twelve and fifteen months to 31 March 2017 published 15 June 2017

Summary: A change of year-end meant SYS1 had a second opportunity to impress shareholders with a bumper set of annual results. However, this time the group admitted recent trading had been “a little slower than expected” and the highly rated share price reacted accordingly. Still, the group’s executives remain confident about the long term and underlined their confidence by declaring a super 26.1p per share special dividend. I continue to hold. 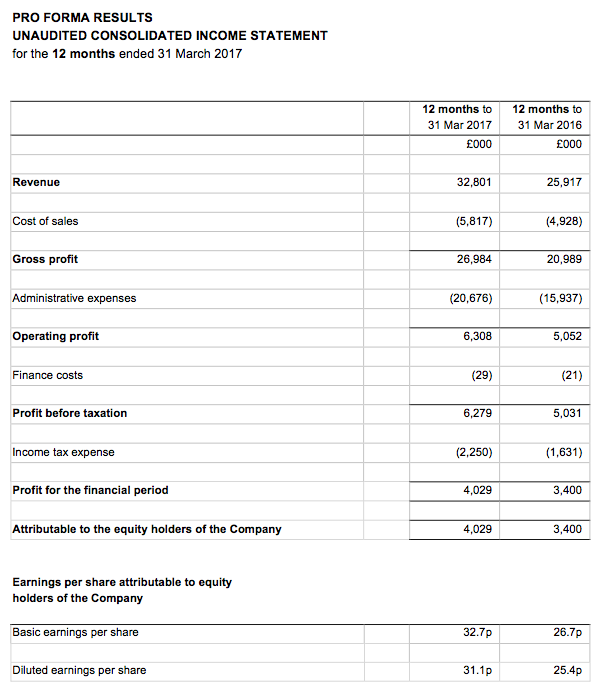 SYS1 had previously announced it would change its year-end from December to March, and these figures were the first to cover the new period.

The group’s calendar 2016 results had already showcased an impressive performance, while a subsequent trading update then signalled further upbeat progress.

In the event, SYS1’s reported growth rates within this statement were quite similar to those revealed for calendar 2016.

For the twelve months to March 2017, revenue climbed 27% and gross profit — the firm’s “main top-line indicator” — gained 29%. Both advances would have been about 14% without favourable currency movements.

These latest figures once again showed record annual levels of revenue and profit, with progress continuing to accelerate following a few subdued years:

SYS1 made up for the lack of any dividend within February’s results by i) declaring a final payout up 83% to 6.5p per share, and ii) announcing a special handout of 26.1p per share.

(This special payment follows a 12p per share special dividend announced during September.)

The year-end change meant two of SYS1’s quarterly performances could be deduced.

Here are my figures for what is now Q4 (three months to 31 March):

Revenue growth during Q4 2017 was 25%, or 16% adjusted for currency movements. The stated Q4 operating profit number improved by 8% — although the increase would have been 30% had the group not spent £210k to change its name from BrainJuicer.

Here are my figures for what is now Q1 (three months to 30 June):

Profit progress during this quarter has not been as straightforward, although I am unsure whether the stated figures were affected by ‘one-off’ items.

Either way, it does look as if SYS1’s performances on a quarterly basis can be a tad unpredictable.

Which leads me to…

* Current trading has been “a little slower than expected”

The main drawback to this SYS1 statement was the disappointing update on current trading:

“Trading during Q1 of our new financial year has been a little slower than expected, but we remain confident of making further progress over the year as a whole.”

I suppose the positive here is that the business still expects to grow for the full year.

To be fair, SYS1 has admitted for some years now that it remains dependent on ad-hoc client work that has “limited revenue visibility”.

In particular, the group suffered a surprise revenue shortfall during late 2012 and was then forced to watch its earnings and share price crash 45%.

SYS1 said back then that it remained “convinced of its long-term growth potential”, and sure enough, earnings and the share price have since recovered to much greater heights.

So it may be worth noting now that SYS1’s latest management narrative consistently referred to the “long term”:

“…developments which I consider particularly significant for the long-term growth and direction of the business.”

“With an eye firmly on the longer-term future…”

“With our core-four research products now accounting for the majority of the business and growing well, the longer-term outlook for continued growth looks encouraging.”

“From a longer-term standpoint, we re-branded the business to present a unified theme…We view this as the start of a new Chapter in the life of the Company“

Of course, the many references to the “long term” may be because the board is not as chipper about the short and medium term!

You could argue SYS1’s underlying performance was better than its headline figures because the group continues to ‘run down’ its old products. 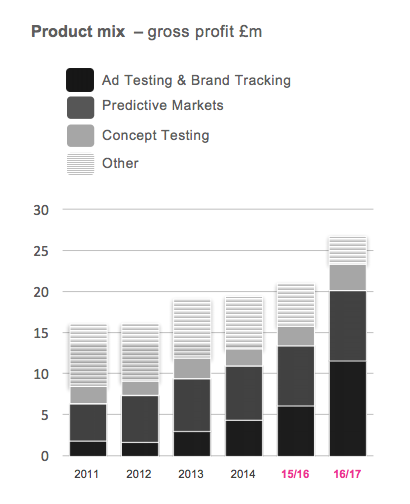 The chart above from the shareholder presentation outlines how the core divisions of Ad Testing, Brand Tracking, Predictive Markets and Concept Testing have expanded during the last few years.

These latest results revealed the four main operations had lifted their combined gross profit by 47% to £23.3m.

In contrast, SYS1’s old products saw their gross profit decline by 45% to £3.4m

Something to bear in mind, though, is this line from the management narrative.

“Whilst 2016/17 growth rates are encouraging, we should point out that they were driven to some degree by significant isolated client wins.  Such wins are not regular or predictable, so we need to exercise caution in forecasting future growth.”

No such caution was expressed within February’s 2016 results.

The US continues to be SYS1’s largest market. Gross profit from the States improved 48% during the year and now represents 43% of group gross profit.

Other overseas markets represent an additional 32%, and I trust such international exposure will be favourable to SYS1 should GBP remain in the doldrums.

These latest results once again underlined the attractions of SYS1’s accounts.

Cash capital expenditure continues to be more than covered by the depreciation and amortisation charged to the income statement. Meanwhile, working-capital requirements continue to be modest and for the last period produced a favourable inflow of cash.

The £8.3m period-end cash position is equivalent to 67p per share and will easily fund the aforementioned 26.1p per share special dividend.

SYS1 continues to operate without debt and remains free of any final-salary pension obligations.

SYS1’s operating margin remains attractive and supports the notion the business enjoys a competitive advantage with its innovative market-research techniques:

The return on equity figures remain tip-top, too:

I have to admit, that multiple could be vulnerable to a de-rating should SYS1’s slower-than-expected Q1 develop into something more untoward.

That said, I’m sure many shareholders (including me) are looking well beyond the next quarter and are basing their hopes on management talk such as this (my bold):

In the meantime, the ordinary 7.5p per share dividend supports a token 1.0% income.