Summary: Another record annual performance from the property-trading specialist — although you would never know that from the sparse management narrative. Gross margins remain high, debt continues to be paid off while the share price still languishes well below my assessment of possible net asset value. I continue to hold. 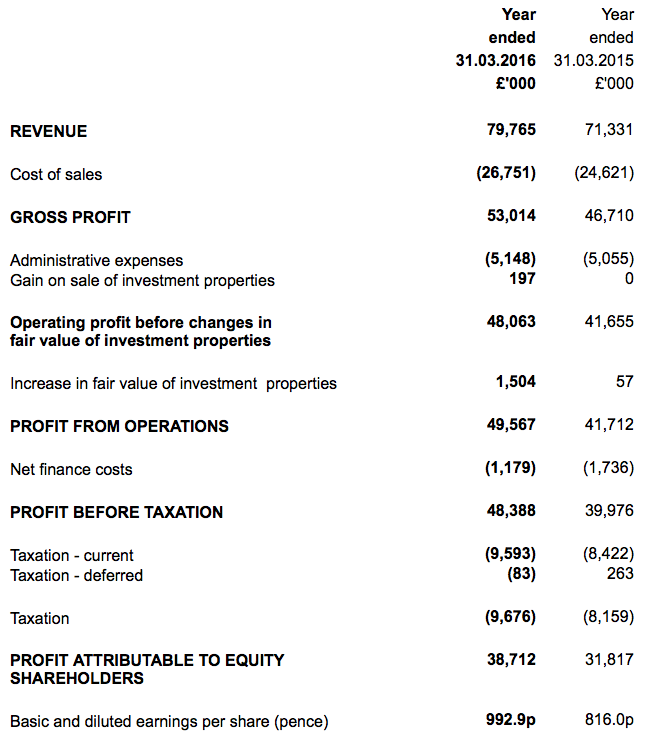 Bumper interims during November had already gone a long way to ensure these annual results would be another record performance.

For the year as a whole, revenue gained 12%, operating profit advanced 15%, the dividend was lifted 9% while net assets climbed 8%.

This table compares the 2016 performance with the progress achieved during the last few years:

As usual, MTVW’s RNS results narrative was very sparse and the chief exec’s statement ran to just two paragraphs — the second of which below was by far the more interesting:

“There are as ever economic uncertainties and we cannot influence the macro-economic situation, but Mountview has strong foundations.  Borrowings have been further reduced and we continue to make good purchases.  We research all opportunities thoroughly and I believe that we can contemplate the future with confidence.”

There should be much more detail of MTVW’s 2016 achievements within the forthcoming annual report.

Anyway, I note the half-year split showed H2 being unable to match the very strong H1:

Nonetheless, the business did progress well compared to the H2 of the prior year.

I was also encouraged by MTVW’s 66.5% gross margin, which surpassed the prior 66.2% peak of 2008. Clearly the firm is able to enjoy good sales prices on the historical cost of its properties.

This was the third consecutive set of annual results to show more cash being used to repay borrowings than used to buy more properties for trading. Some £21m was spent to pay off loans versus £10m spent on new stock.

I get the impression from this trend that MTVW is not being overwhelmed with bargain property opportunities at present.

Still, I’d like to think MTVW will be sitting very pretty if the property market does in time produce some attractive buying valuations.

This next table compares the value of MTVW’s trading properties to the group’s net debt. You can see net debt falling considerably and, representing the equivalent of 12% of the firm’s trading properties, is at its lowest relative level for at least 20 years.

I reckon MTVW is capable of increasing its current net borrowing by at least £60m to £100m-plus — which would come in handy if the property market does flounder and cheap homes can be easily snapped up.

These results showed trading investments of £334m which, if sold at the the average margin enjoyed during the last ten years, would yield about £869m.

Tax the resultant gain at 20% and then add on other investments of £29m and subtract net debt of £41m, I arrive at a possible net asset value (NAV) of £749m or £192 a share. That compares to the £80 per share NAV reported by MTVW today on a historical-cost basis.

With the share price at £103, clearly there is still some upside potential here. But the great unknown remains how long it will take MTVW to sell all of its existing properties to realise that potential £192 per share NAV guess.

For a more immediate NAV estimate, there is the £666m figure assigned to MTVW’s trading stock by an independent revaluation as at September 2014. Adjusting this £666m valuation for tax, investment properties and debt, I come to an NAV of £150 a share.

This £150 estimate is based on MTVW’s properties being in their current ‘regulated tenancy’ state — so does not include any upside potential for when the property is vacated and can be sold at market value.

Nor does this £150 estimate include any house-price gains experienced since the September 2014 revaluation exercise.

However, I calculate MTVW has sold trading properties worth £63m after the revaluation assessment took place, and has bought new stock worth only £16m. Some complex sums in a Comment below suggest to me an NAV of £140 per share.