Summary: These figures were somewhat better than I had expected. The regulated-tenancy property trader produced a record level of revenue during the second half to counterbalance a rather disappointing first half, and the end result was not far off the very strong numbers delivered for the previous year. I was also pleased net asset value advanced further to a new high while borrowings were reduced to a fresh low. My updated sums now point to a possible NAV of £206 per share based on the firm’s previous gains on sold properties. I continue to hold. 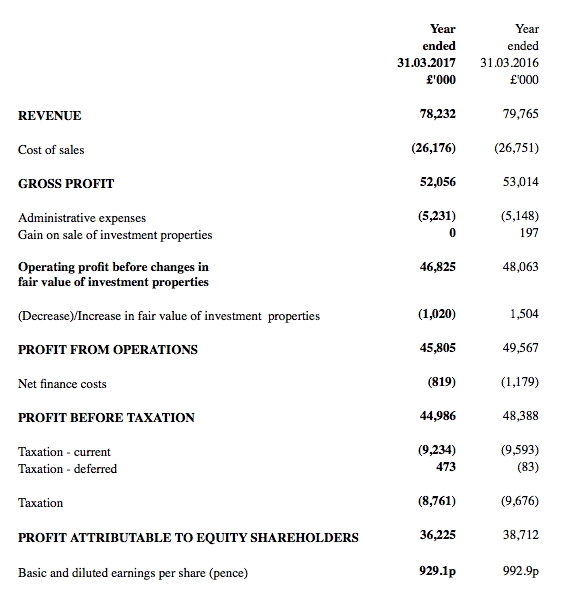 MTVW described these results as “very sound” and they were better than I had expected.

As you might recall, MTVW’s interims issued last November were somewhat disappointing following increases to the rate of stamp duty.

Back then, MTVW reported first half-revenue and operating profit down 21% and 16% respectively.

However, the group clearly enjoyed a strong second half to be able to declare both full-year revenue and profit down only 2%. These annual figures were in fact MTVW’s second-best ever:

MTVW’s RNS results narrative was not as terse as usual — this year the chief exec’s statement ran to four paragraphs.

This was probably the most interesting part of the text:

“With continuing uncertainties in the macro-economic situation we must rely upon our own sound strategies to ensure further prosperity for the Company.  We keep our gearing low and are thus able to take advantage of good purchasing opportunities when they occur.  We have made more purchases in the financial year ended 31 March 2017 compared with the previous year and with strong sales revenue since 1 October 2016 we have come close to matching the outstanding results of year ended 31 March 2016.”

There should be much more detail about MTVW’s 2017 progress within the forthcoming annual report.

Here is the first-half/second-half split:

H2 revenue of £44m is a new six-month record while the accompanying H2 £28m gross profit almost equals the freak result of H1 2016.

True, the gross margin during H2 was 63% and lower than the extraordinary 71% reported during H1. Nevertheless, the full-year rate was 66.5% and equal to the record set during the previous year:

A 66.5% gross margin is equivalent to MTVW selling a property for a 199% gain. For some perspective, the group has enjoyed an average 166% gain during the prior ten years.

* Gearing remains at its lowest level for at least 20 years

Although MTVW’s full-year profit was not the highest the firm has ever recorded, it did add £24m to the balance sheet to help take net asset value (NAV) to a fresh £336m/£86 per share peak.

Something worth noting is that MTVW’s total borrowings decreased by £10m to £32m during the year — and they now stand at their lowest level since 2007.

Looking back, 2007 was a good time for property companies to be light on debt.

In fact, I speculated in November that MTVW’s low debts could be due to its veteran chief exec — who has been in charge since 1990 — sensing that now may not be the best time to be going all out buying stock.

So perhaps we aren’t due a major housing downturn after all.

Indeed, I wonder if MTVW is now able to pick up some bargains as other landlords shy away from property because of the higher levels of stamp duty.

This next table compares the value of MTVW’s trading properties to the group’s net debt:

You can see net debt falling considerably and, representing the equivalent of 9% of the firm’s trading properties, is at its lowest relative level for at least 20 years.

In the past, this ratio has often topped 30% and suggests MTVW could have the current capacity to borrow another £60m.

Two minor points from these results surprised me.

First the dividend — it was held at 300p per share.

Given profit for the full year was down only 2% and borrowings are historically low, I did think a small lift to the payout could have been justified.

It’s unusual for this particular collection of properties to lose any value. Their aggregate valuation has declined only once before — during 2009 — since MTVW acquired them in 1999.

The Belsize Park portfolio is now in the books at £29m.

These results revealed trading properties with a £337m book value, which could yield £924m if they were all sold at the average margin enjoyed during the last ten years.

Taxing the resultant gain at 19% and then adding on the Belsize Park investments of £29m and then subtracting net debt of £31m and other liabilities of £9m, I arrive at a possible net asset value (NAV) of £803m or £206 a share.

That compares to the £86 per share NAV reported by MTVW on its usual historical-cost basis.

With the share price at £110, clearly there remains some upside potential here.

But as always, the great unknown is how long it will take MTVW to sell all of its properties to realise that potential £206 per share NAV guess.

This £666m valuation is becoming a little stale now, but for what it is worth, adjusting this valuation for tax, the investment properties and debt gives an NAV of £151 a share.

As a reminder, this £151 estimate is based on MTVW’s properties being in their current ‘regulated tenancy’ state — so does not include any upside potential for when the property is vacated and can be sold at market value.

And as before, this £151 estimate does not include any house-price gains experienced since the September 2014 assessment, and nor does it adjust for any properties bought or sold thereafter.