Summary: At last — one of my shares has issued an ‘ahead of expectations’ trading statement! TSTL’s medical wipes appear to be selling very well and second-half profits now seem set to grow by 35%. There could be further upside, too, if TSTL’s past ‘sandbagging’ form is anything to go by. My valuation sums still suggest annual returns of 15%-plus could be earned. I continue to hold. 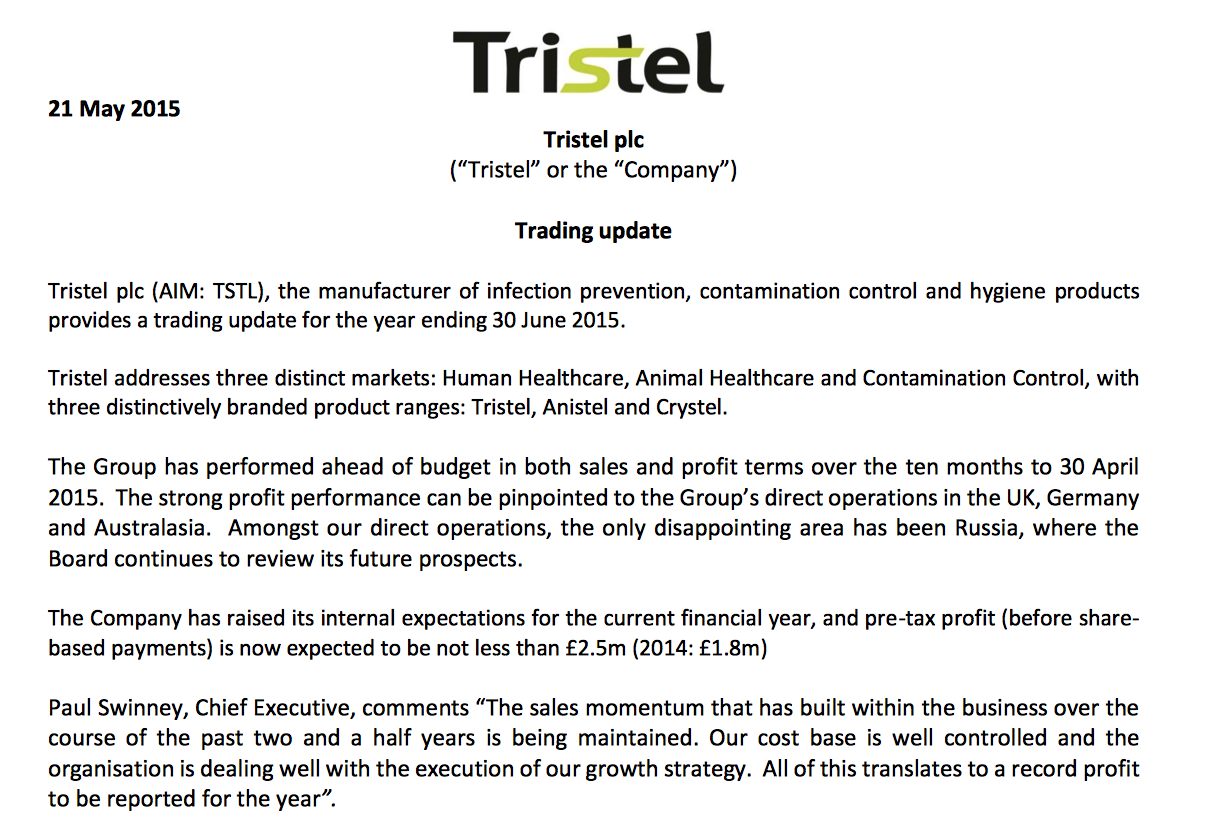 * Second-half profits up at least 35%

TSTL’s first-half results from February had already showed pre-tax profits up 43%, so I am very pleased the group’s significant trading momentum has continued.

* Could there be further ‘sandbagging’?

I have noted in the past how TSTL has ‘sandbagged’ its statements, with subsequent results coming in well above the earlier ‘no less than’ forecast.

In particular, back in April 2014, TSTL issued this ‘ahead of expectations’ update:

I’m hopeful the latest ‘not less than’ £2.5m figure will be beaten by a similar margin!

* On track to easily meet the 2017 revenue target

TSTL’s interim results confirmed the group was aiming to grow its revenue by at least 50% to £20.2m during the three years to June 2017.

That top-line target looks very achievable now. The interim results webinar revealed the business was aiming for 15% margins for the current year, so a pre-tax result of £2.5m suggests turnover for this year could be about £16.7m.

Using the 26% tax charge applied in the interim results, a pre-tax profit of £2.5m would produce full-year earnings of 4.5p per share.

I just wonder if we could see 4.6p or even 4.7p per share, as that would mean the indicated 2.34p per share full-year dividend would be twice covered.

Within February’s interims, TSTL did say it would target a twice-covered dividend:

I recall thinking it was odd that commissioned-broker Equity Development was looking for earnings of 4.01p per share — and therefore dividend cover of only 1.7x — prior to this latest statement.

For what it is worth, Equity Development is now forecasting earnings of 4.36p per share for 2015 (and therefore dividend cover of 1.85x).

* My estimate of surplus year-end 2015 net cash is now £3.7m or 9p per share. TSTL’s near-term enterprise value (EV) could therefore be £31m or 76p per share. Using the aforementioned 4.5p per share earnings guess, the forecast P/E on my EV is 17.

* Applying a P/E of 17.5 on that 5.9p EPS estimate to reflect the growth expected during the next few years (and TSTL’s longer-term opportunities in the States), I arrive at a potential 2017 value of about 104p per share for the underlying business.

* Between now and 2017, I think TSTL could pay out a further 5p per share through dividends and retain a further 6p per share of extra cash in the business (to give a net cash position of 15p per share).

* Assuming my sums are accurate, I’m looking for 45% upside from 85p during the next couple of years — equivalent to compound returns in excess of 15%. That projection matches the calculations I made back in February.

* Next update — probably a pre-close statement in late July.