Here’s a an update on Tristel (TSTL). 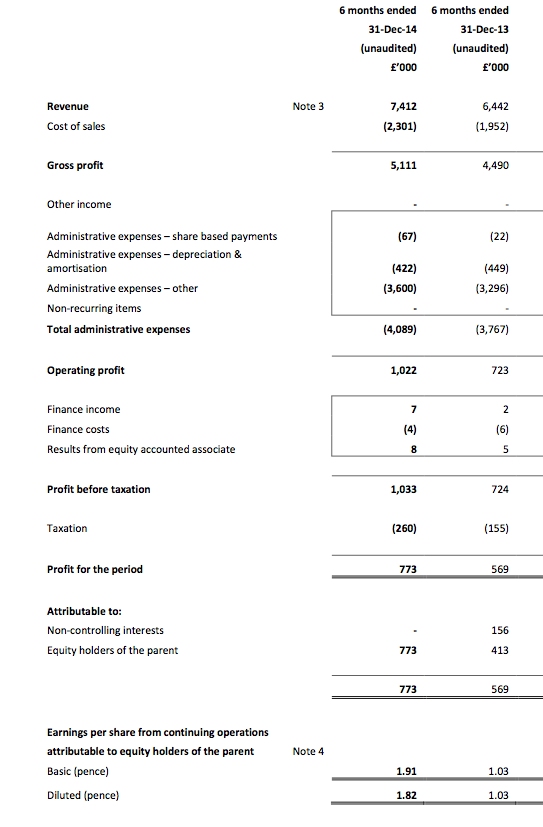 In fact, I was correct to assume “further AGM ‘sandbagging’”…  and H1 sales did indeed come in at my predicted £7.4m. My H1 profit guess of £1.1m would have been spot on, too, were it not for a £67k staff-option charge.

Francisco Soler, a founding shareholder with a 26% stake, resumed TSTL’s chairmanship in October after two years as a normal non-exec. His latest statement shows he remains keen on the group’s products and is optimistic about future returns on reinvested profits (my bold below):

“I remain convinced, as I was when I first encountered the investment opportunity some twenty years ago, that Tristel’s chlorine dioxide technology represents a global opportunity.”

“Our vision is still to gain global recognition for our technology as the outstanding biocide for the decontamination of medical devices used in ambulatory care, and for critical surfaces within hospitals.”

“It is important for our Board to make clear the central themes of our strategy. They are to focus upon healthcare, to sell consumable products that perform essential functions for users at attractive margins whilst remaining a high growth business.   If we achieve all these things we will be a profitable business generating superior net margins and return on capital exceeding those of our peers.”

(My bold): “We have re-calibrated one of our key strategic financial goals to grow revenue by at least 50% over the next three years from the base line of £13.5m achieved in 2013-14.”

Previously this goal was revealed only in shareholder presentations by way of a 17% annual sales growth target. The goal now indicates sales could be at least £20.2m for the year to June 2017. Sales for the year to December 2014 were £14.4m.

TSTL confirmed its 15% operating margin target would be exceeded in the next few years if the aforementioned sales growth targets were met. In fact, I had been predicting margins would increase to 17%.

However, reaching 17% is unlikely to happen now as TSTL has since decided to “maintain the target at 15% over the medium term” so it can “invest in new products and markets,  including, when we are ready for the challenge, North America…”.

The Holy Grail for many TSTL investors is for the business to prosper in the States.

As I understand things, all sorts of costly regulatory bridges need to be crossed before TSTL’s products can be sold Stateside, and working with a deep-pocketed partner might the most sensible approach.

For now, success in America’s enormous healthcare market remains a distant prospect — but it seems some early groundwork is about to be laid following the chairman’s comments above. (Nonetheless, I would always welcome some wild share-price speculation based on potentially massive American profits!)

The obvious downside (my bold): “The investment required by us over the next three to five years to meet the new regulations will be substantial and will be charged against our profits.”

But there are potential upsides (my bold):

a) Smaller competitors are not as prepared and “there is a significant opportunity for Tristel to gain market share over the coming years”.

b) The new regulations have prompted a product portfolio review: “A rationalisation of our portfolio of chemistries may be the result.  The objective will be to minimise the investment required to comply with regulations, whilst maintaining revenues via the substitution of non-chlorine dioxide with chlorine dioxide products.”

The upshot could be no loss of sales and greater profitability from the core, higher-margin chlorine dioxide products.

These H1 numbers also reassured me following some questions I had about the preceding H2 performance:

In particular, I was pleased the latest H1 profit of £1,022k almost matched the £1,096k profit from the preceding H2 — which does seem to be the ‘seasonally’ stronger half.

Back in December, I noted the comparable increase for H2 2014 was just 6% (to £5,982k), so I am glad TSTL’s main profit earner still appears to be growing well.

* The trailing P/E based on my EV and EPS estimates is therefore 19. Not obviously cheap — but let’s factor in some growth…

* Applying a P/E of 17.5 on those EPS estimates to reflect the growth expected during the next few years, I arrive at a possible value of about 100p per share for the underlying business.

* In addition… the latest H1 statement implied a current-year dividend of 2.34p per share, which should provide an extra 5p per share or so during the next two years. I reckon the net cash position could increase by a further 5p to 12p per share, too — assuming margins do indeed average 15%.

* That implies 46% possible upside, or annual compound returns in excess of 15%, from 80p… assuming my sums prove accurate and TSTL continues to boast impressive sales and margin potential!

TSTL’s shares go ex-div on 26 March and the 0.585p interim dividend will be paid on 13 April. Next statement — probably a pre-close update in late July.