Summary: A couple of earlier updates had already signalled this lacklustre first-half performance. Indeed, several references to competitive pricing and re-designed products implied the advertising research specialist may no longer be the ‘pioneering’ force it once was. Furthermore, the new Ad Ratings service could be hard pushed to become a real money-spinner and return the group to growth. That said, margins remain good, there is cash in the bank and the P/E might be 9… if you believe some significant development expenditure will eventually pay off. I continue to hold. 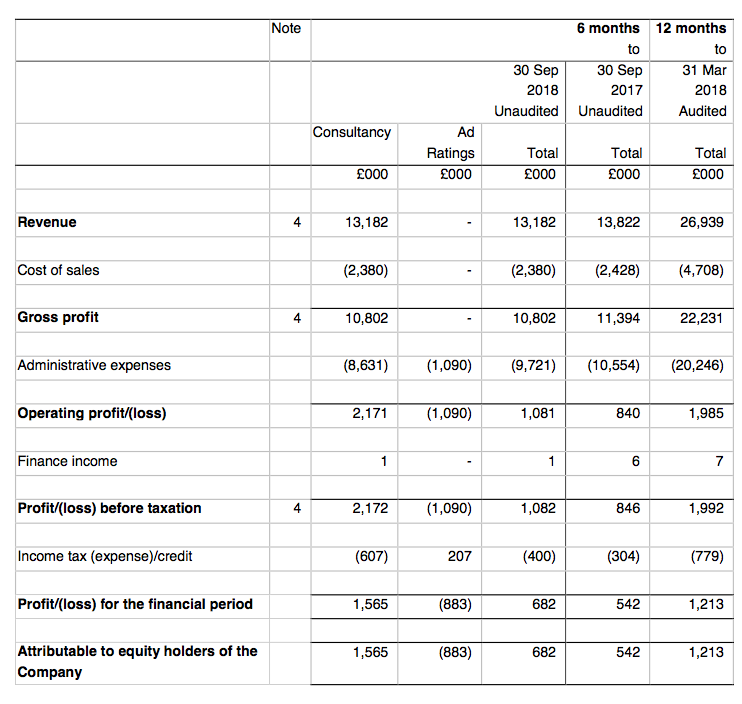 * A 19% headcount reduction was the first half’s bright spot

This first-half statement was never going to be spectacular.

Management had previously described June’s annual results as “miserable” while subsequent updates — during September and October — owned up to somewhat mixed trading.

In the event, both revenue and gross profit — SYS1’s “main top-line measure” — dropped 5%.

Reported profit included start-up expenses of £1.1m relating to the new Ad Ratings service (more on that later) and a £251k windfall from the local council (point 8).

Adjust for those items and ‘underlying’ operating profit more than doubled to £1.9m. “Tightly” controlled costs — which reduced the average headcount by a sizeable 19% — caused the ‘underlying’ profit surge:

This table from SYS1’s first-half results last year is worth revisiting: 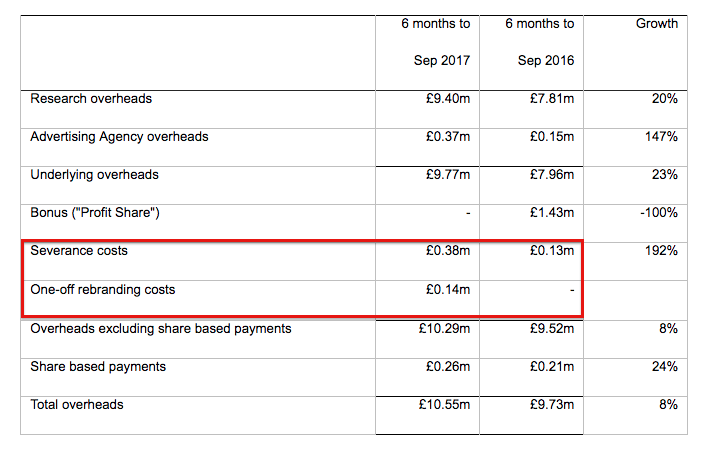 The ‘non-underlying’ severance and re-branding costs of last year were not disclosed this time.

The bright spot among the sea of rather subdued numbers was gross profit per employee, which has now reached its highest first-half level for at least five years:

SYS1’s September and October trading updates had suggested the business was “stabilising” — albeit at a slower rate than had been anticipated.

However, the divisional performances varied somewhat: 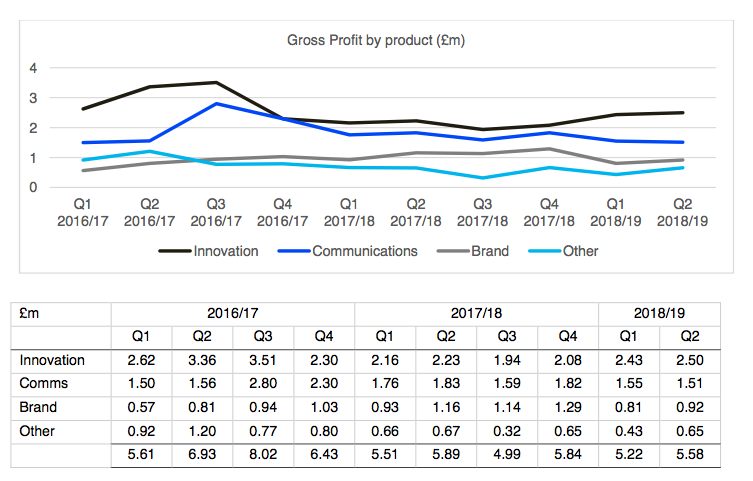 All told, it seems SYS1 continues to re-jig its services and lower its prices to combat “cuts in marketing spend by some of [its] largest clients”. 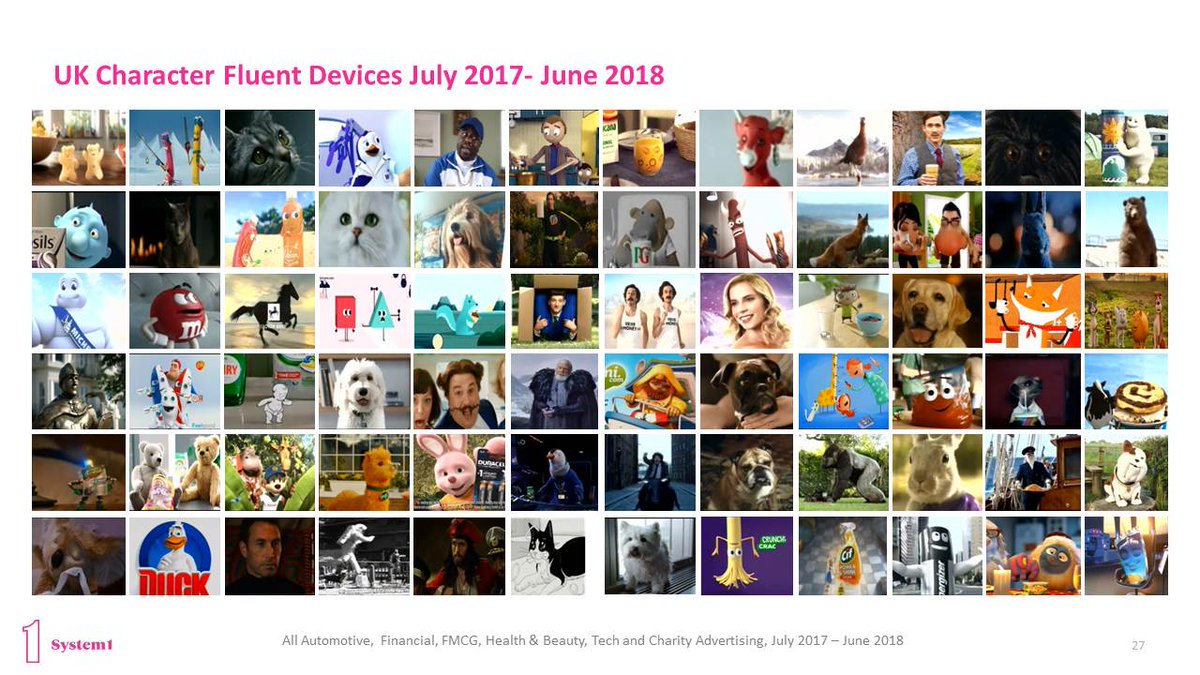 However, the message from clients contradicts SYS1’s talk of cutbacks a little.

For example, according to Marketing Week:

“Speaking on a press call this morning (1 February), Unilever’s CFO Graeme Pitkethly said the company’s ‘brand and marketing’ spend was up slightly in absolute terms in 2017. It invested €250m (£220m) more in media and in-store in 2017 than 2016, offsetting that investment with efficiencies in ad production brought about by zero-based budgeting.”

I suppose “efficiencies in ad production” is the key term from Unilever. An article from Ad Week says:

“Unilever, which has taken repeated steps to combat increasing pressure on the consumer-products space, announced in its 2017 annual report last month that it had saved about 30 percent on agency fees after taking more of its ad work in-house and reducing the roles of its external agencies.”

Similar stories have occurred at Nestle and Procter & Gamble.

So, marketing budgets as a whole appear not to have been slashed. Instead, clients have saved money by becoming more selective with who they work with — and some clients look to have dropped SYS1.

* The director comments at the AGM may have been too fanciful

SYS1 hopes a new Ad Ratings service can return the group to growth.

The Ad Ratings website has all the details, but the general concept is for advertisers to be able to monitor the performance of rival brands by using SYS1’s data and analysis.

The snapshot below (taken from this video) compares the marketing effectiveness of breakfast cereals for Kellogg’s and Nestle: 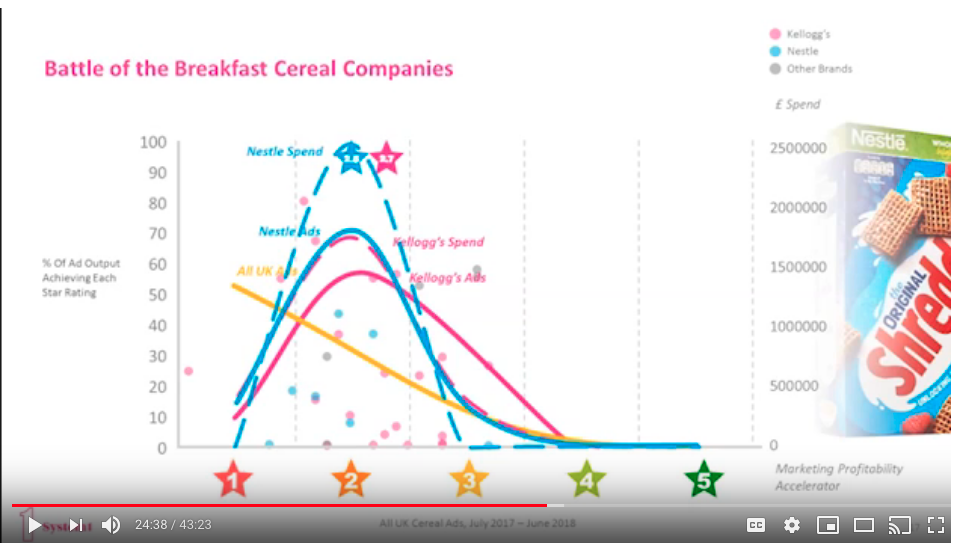 I am sure there is more to the service than what my screenshot shows, but essentially marketing directors will now (in theory) be able to see exactly who in their sector is gaining market share through savvy adverts and clever spending.

“The insights generated from such a large and comprehensive data set will increase our understanding of what makes effective advertising, and so enhance our existing business, as well as opening up the potential for a new and scalable revenue stream.”

Ad Ratings is a subscription product, which should generate the firm a more predictable income. The cost per advertising category is £1k or $2k per month, and there are 89 different UK categories and 137 different US categories.

These results showed Ad Ratings had absorbed development costs of £1.6m, of which £0.5m was capitalised on the balance sheet. I suspect a similar investment will be required for the second half.

(I should add that SYS1’s annual results had led me to believe that notable Ad Ratings costs would be incurred only if the service’s launch was successful.)

So what is the potential for Ad Ratings?

Back in July I attended the company’s AGM and SYS1 chief exec John Kearon speculated on one day garnering 2,000 Ad Ratings subscribers.

Given the firm served 230 clients during this half year — and that 2,000 subscribers could produce revenue of £20m-plus — I thought at the time Mr Kearon was being rather fanciful.

From the Ad Ratings website, I have counted approximately 4,000 different advertisers from the 226 different UK/US categories: 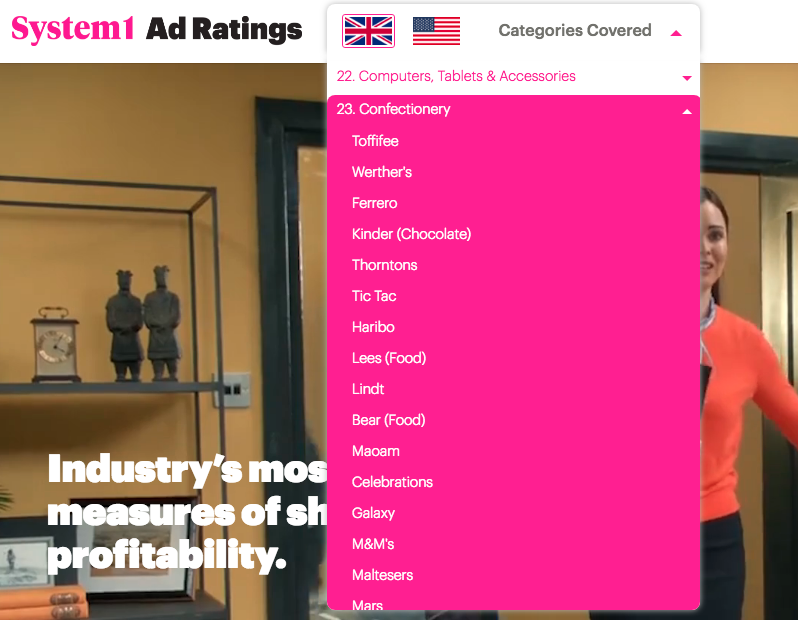 Ambitions therefore to capture 2,000 subscribers may be a very tall order.

Looking though the categories and counting those 4,000 advertisers, two thoughts struck me.

First, numerous categories cover only a handful of advertisers. Potential subscribers may therefore already have a good idea of who is performing well in their sector — and not require SYS1’s data.

Second, certain categories — such as finance and medical — are hamstrung by various advertising regulations.

Such adverts are generally deemed by SYS1 as 1-star money-wasters, which begs the question why anyone would pay to discover how much money everybody else serving the category is (apparently) wasting.

Anyway, assuming 5% of the 4,000 or so UK and US advertisers sign up, I reckon Ad Ratings revenue could be £3.3m. Then assume a chunky 30% margin and we could be looking at an extra £1m profit.

While any extra earnings would be very welcome, the near-term Ad Ratings potential does not appear truly transformational — especially as these interim results showed the main divisions already enjoying a combined £1.9m operating profit.

* The dividend could be reduced to pay for a share buyback

The aforementioned reduction to the headcount ensured SYS1’s margins remain quite respectable.

Furthermore, the balance sheet continues to show cash (£3.6m or 28p per share), no debt and no pension complications. However, cash flow was not great.

A significant £2m was absorbed into working capital (mostly receivables): 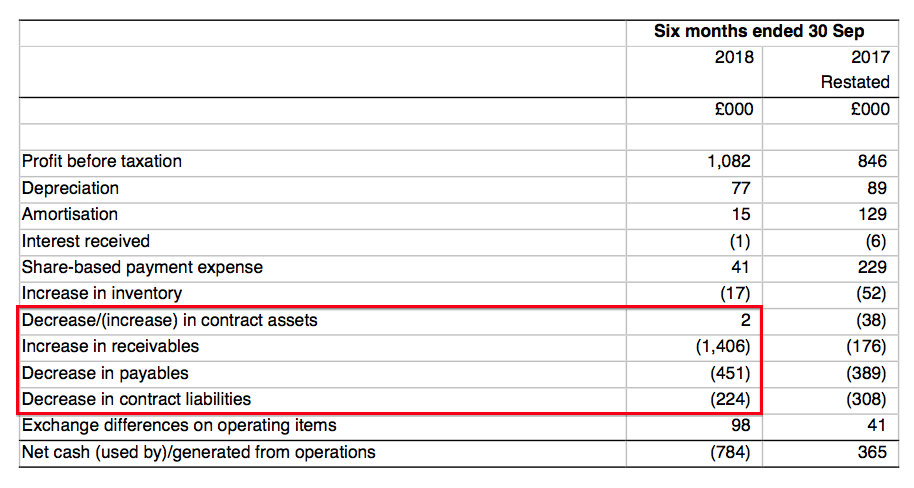 No real explanation was given, save that cash flow was “lower than we would expect” and due “principally to debtor days increasing from 57 days… to 77 days”.

SYS1 has never suffered cash flow problems before, so I trust this working-capital performance is a half-year timing issue rather than anything more sinister.

I am not sure why this £246k does not match the £498k Ad Ratings expenditure that management said was capitalised on the balance sheet.

Anyway, the Ad Ratings investment and wider cash flow performance prompted SYS1 to admit its final dividend “may be reduced”.

News of a potential dividend cut is never great, but at least SYS1 claimed the savings could be used to “purchase shares at an attractive valuation”.

I have to confess, I do not know what to make of this. I suppose I should be pleased the company wishes to buy back its shares at an attractive valuation. (And some of the senior managers have been buying shares of late anyway).

However, SYS1’s previous buyback (during 2016/17) involved spending more than £3m purchasing shares at almost 400p. The price has since dropped close to 50%.

I can see why management might think the shares are attractive.

Doubling up this first-half’s operating profit of £1.9m (before Ad Ratings costs) gives earnings of 22p per share after applying the 28% tax seen within these results.

Then subtracting the 28p per share cash position from the 230p share price gives an enterprise value of 202p per share. Dividing that 202p by my 22p per share earnings guess produces a possible P/E of 9.

I must admit, the ‘core’ business (i.e. excluding the Ad Ratings start-up) does look cheap — especially if you believe Ad Ratings will eventually generate a profit.

However, I have been guilty of excluding certain SYS1’s costs before…only to find they become part and parcel of the ongoing business.

In particular, SYS1 started an advertising agency the other year — the losses for which are also separately disclosed from the ‘core’ business.

Trouble is, this agency still loses money and is now described as a “valuable showcase” for the firm’s main services.

Therefore my valuation sums now include the agency’s losses… and I do wonder whether the Ad Ratings service will also lose money for years… and ultimately become another “valuable showcase”.

To be honest, my main dilemma right now is deciding whether SYS1’s services will actually be that useful to many more clients.

You see, I have read the book, watched the presentations and I am convinced about SYS1’s “pioneering” System1 approach to marketing. However, existing clients keep on quibbling about price while the firm’s products seem to be re-designed every year.

So maybe the people who actually work in advertising — or those who set advertising budgets — have a different experience of using System1 thinking. Maybe the firm’s “pioneering” approach is, well, no longer that pioneering.

While I ponder further, the shares yield 3.3% assuming the 7.5p per share dividend is maintained.

7 thoughts on “System1: H1 Results Could Mean The P/E Is Just 9… Assuming The Ad Ratings Service Eventually Becomes A Money-Spinner (I’m Not Sure)”