Event: Preliminary results and presentation for the year to 31 January 2017 published 28 March 2017

Summary: These results from the car-loan specialist were quite respectable, although a 60% increase to bad debts does suggest the favourable under-writing conditions of the last few years may now have turned. Still, the veteran family management does not seem too concerned and, encouragingly, appears more interested in developing the business towards 2028 rather than 2018. That length of investment horizon suits me just fine. I continue to hold. 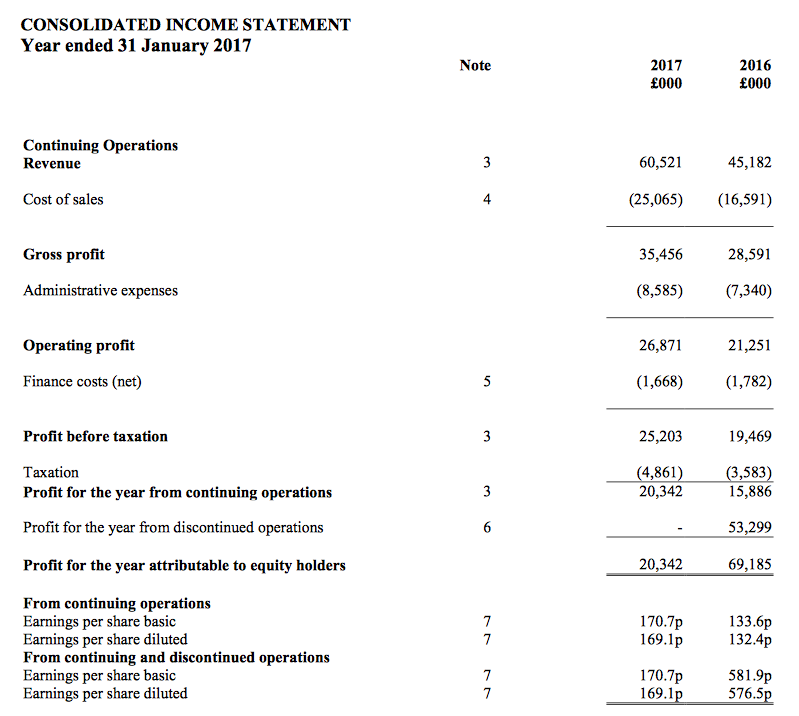 A trading statement last month had already indicated these annual figures would be very respectable.

The results showed revenue up 34% and operating profit up 26%, with the figures recording the 17th consecutive year of growth for SUS’s Advantage Motor Finance division.

(Following SUS’s disposal of its doorstep lending subsidiary during 2015, the group’s operations are now almost entirely related to Advantage):

* Impairments increase by 60% but management does not seem too concerned

With revenue growth outpacing profit growth during the year, clearly SUS’s extra business came at the expense of margin.

The group’s gross margin reduced from 63% to 59% and the following results footnote explained why:

SUS did not appear to be too concerned about the movements:

“The past three years have seen impairment as a proportion of revenue in a historically low range of 16% to 20% against 25% to 37% in the previous three years when Advantage still enjoyed very good profitability.

Since 2015 the record growth and an inevitable increase in competition at the higher quality end of the Advantage product range has seen both a slight upturn in impairment to just over 20% this year and some increase in brokerage costs. These are mainly offset by improved interest rates and so margins continue to be very healthy.”

Here’s how the impairment for 2017 compares to the previous four years:

I think it is fair to assume 2015 and 2016 were exceptionally favourable years for impairments, and perhaps the next few years won’t be as kind.

This first slide indicates that the cost of acquiring each loan, the rate charged on the loan, as well as the average term of the loan, have all increased slightly. Meanwhile, the credit score of a typical customer was the lowest since at least 2012: 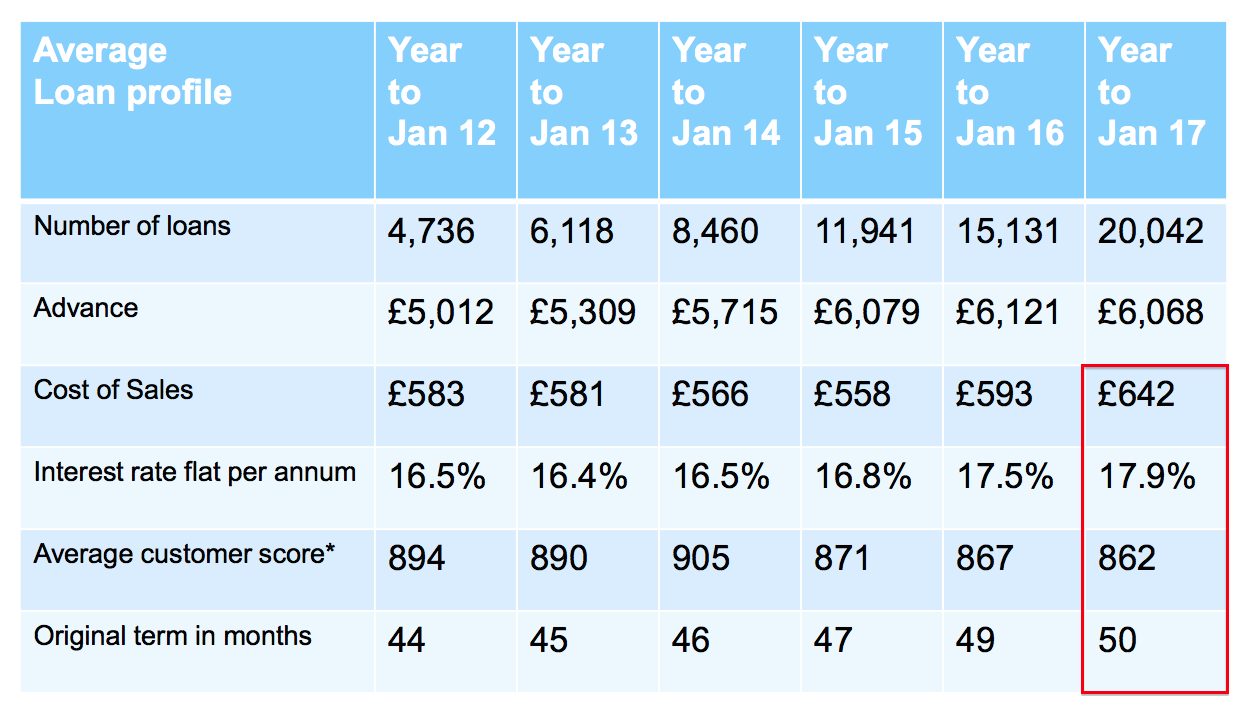 This second slide shows the number of up-to-date accounts decreasing from 91% to 87%: 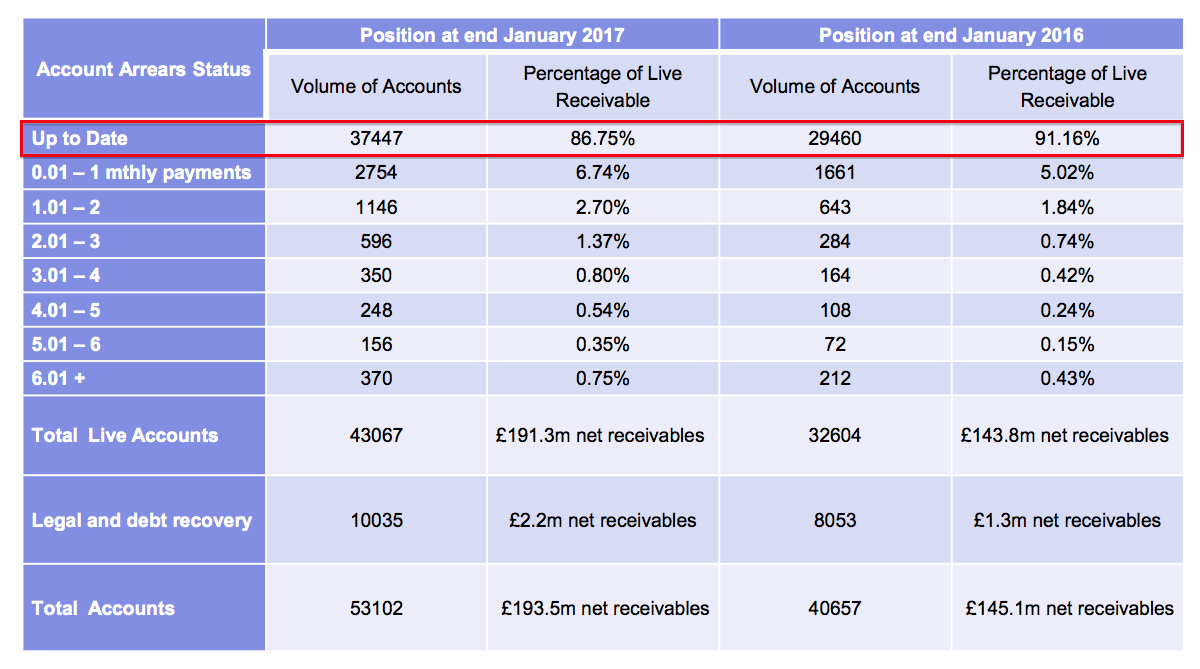 * Further evidence of greater impairments when comparing H1 vs H2

The first-half/second-half split shows impairments running at a greater rate during H2 than H1:

Although the ratios for H2 remain below the levels seen before 2014, the calculations are further evidence of write-offs turning the wrong way.

While the operating margin remains extremely healthy compared to most businesses, SUS requires a high level of profit in order to generate an acceptable return on the equity that’s invested in the business.

I calculate SUS earned a 15% (£20m) return on the average £139m of equity employed throughout the year.

That 15% return was assisted by the use of significant debt — net borrowings increased from £12m to £49m during the period — and adjusting my sums for the loans and associated interest reduces the result to a modest 13%.

This next slide below from the presentation is informative: 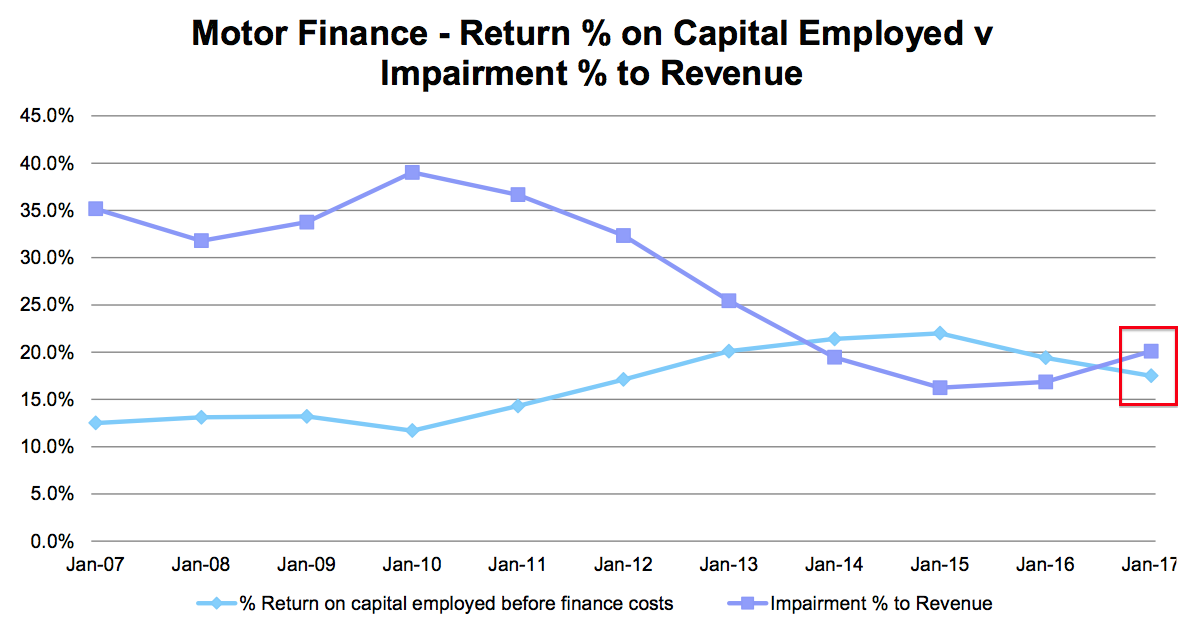 It appears SUS’s return on capital figures relate only to the Advantage division, and show 15%-plus for 2017 versus my guess of 13%.

I presume the difference is due to my use of the overall group numbers, which must include certain central assets that attract extra costs (such as director wages).

* I will need to investigate this cash flow matter further

I wrote in my original Buy report that SUS had been reinvesting significant amounts of cash flow back into the business, and that was definitely the case for 2017:

Some £48m was absorbed into new customer loans during the year — which is a huge sum when compared to the £27m operating profit.

I must confess, I am not entirely sure what has occurred here.

You see, this slide from the results presentation… 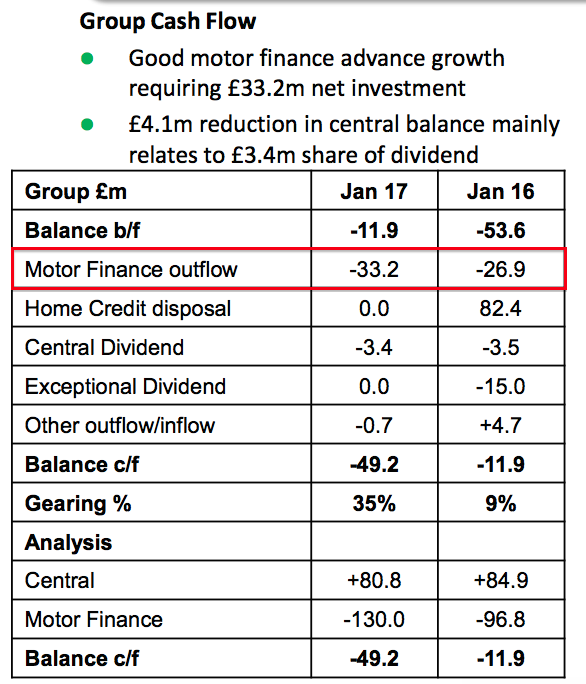 …suggests the net £33m extra funding required for Advantage was only £6m greater than that needed for 2016.

From that perspective at least, the cash movements for 2017 would not appear too worrying.

However, my earlier sums — based on old Advantage annual reports — had indicated 2016 required much less cash than that shown in above presentation slide.

I will have to investigate this matter further. I hope to deduce what has actually happened — and match the figures in the above slide with those in the accounts! — when the annual reports of both SUS and Advantage become available.

At least all the other cash-flow items, such as capital expenditure, remain immaterial.

Then applying the 44% margin witnessed during 2017 gives me an operating profit of £31m. Taxed at the forthcoming 19% UK standard rate, I calculate possible operating earnings to be roughly £25m or 208p per share.

Although my margin guess may be a little optimistic given the greater impairments witnessed during H2, my calculations do not assume any further new customers.

That rating seems quite reasonable to me given Advantage’s recent growth rate.

For what it is worth, SUS continues to be optimistic and reckons it enjoys “the ideal platform to continue its record growth and profitability focussing on its proven fields in specialist finance.”

“Both Advantage and (fledgling bridging-loan division) Aspen operate in growing markets.  These in turn exist within a robust British economy, where the labour market is strong and where the current focus on increasing productivity and reducing regulation should underpin economic growth.”

“The road to sustained success is not made up of a giant leap but of a thousand small steps, and this kind of approach will continue to sustain and dynamise our business over the next decade.”

I suppose fussing over the latest impairment levels could be seen as inconsequential when the bosses have an investment horizon that stretches to 2028.

Meanwhile, the 91p per share dividend pays a 4.4% income.

7 thoughts on “S & U: Annual Results Signal The End Of The Favourable Lending Trend As Impairments Jump 60%”