Summary: Oh dear — I did not expect these annual results to include a profit warning for 2017. The share price has dropped by a third and I’m no longer so sure the long-term potential here is as great as I had assumed. That said, the restaurant group’s 2016 figures were not too bad while the lowered rate of expansion looks far more achievable based on current cash flow. Everything now rests on the experienced managers to resolve the problems — which I think they can. I continue to hold. 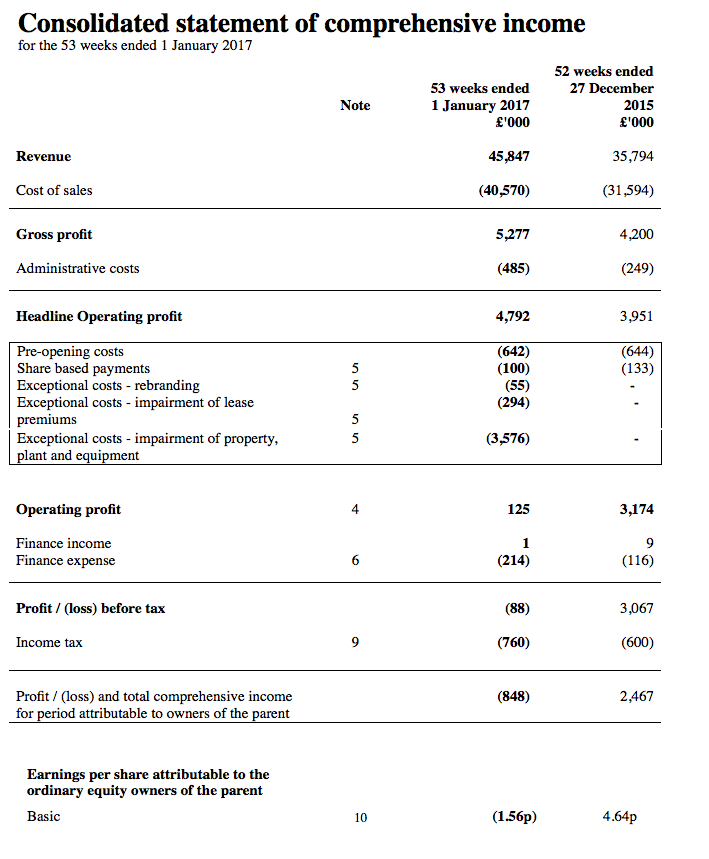 These were actually record results for TAST, although the numbers were overshadowed entirely by a profit warning for 2017.

“Post year end trade has been below expectations and the Directors believe that the trading environment for the coming 12 months will remain challenging.

As a result, the Group has revised down the planned number of openings for the current year from 15 to 7 and expects that headline operating profit will be below that achieved in 2016.”

While I had already felt TAST’s progress had moderated somewhat within September’s interims, I did not anticipate headline profit would shift into reverse this year.

The bad news was especially surprising since it came just four months after a £9m placing, for which TAST informed the participants that its 2017 expansion would involve 15 new openings (now seven).

I wonder what those participants think of TAST’s revised projection after having paid 145p for their shares (now 75p).

Anyway, the 2016 figures did not seem too bad to me overall:

Revenue gained 28% and operating profit before pre-opening costs advanced 23% after the estate was expanded from 48 to 61 restaurants.

I was pleased these annual results did not carry any further restaurant write-offs.

September’s interims had already shown a £3.9m charge relating to five under-performing sites, and this full-year statement brought with it only an extra £55k exceptional cost relating to the rebranding of some older units.

* H1 vs H2 — the second half showed some improvement

There were some encouraging signs within the first-half/second-half split:

Certainly both the gross and operating margin for H2 were healthier than the comparable margins of H2 2015. In fact, both H2 margins matched those achieved during H2 2014 — which was a buoyant year for TAST.

The above table also suggests H1 2016 was generally quite poor for converting revenue into profit.

I also note revenue per average site improved a little during H2 2016. Although at £851k, the number remains below the £900k-plus achieved until the end of 2014:

Last year, TAST continued to spend all of its operating cash flow — and more — on opening new restaurants and maintaining existing sites:

It seems to me that with the year-end balance sheet carrying net debt of £2m, alongside facilities to borrow a further £5m, plus yearly cash flow of perhaps £6m, TAST would have had just enough money to open those 15 sites.

But spending a further £13m would have left the chain very short of expansion funds for 15 new sites for 2018, as I have calculated previously.

My guess is that opening seven sites (and maintaining 60-plus others) will cost TAST approximately £7.5m during 2017. That level of expenditure appears much more manageable given the group’s current cash flow.

Indeed, the slower rate of openings could even mean TAST is now able to self-fund its roll-out — albeit at a slower pace than predicted originally.

…but the long-term upside potential may no longer be as great as I had expected.

I mentioned in September that:

For example, PRZ never took on debt and bought some freeholds, while TAST has taken on debt and its estate is entirely leasehold.

Another difference beginning to emerge between PRZ and TAST concerns margins.

In contrast, TAST’s margin appears unlikely to top 10% this year with between 50 and 60 sites. I just wonder if that lower margin may in time reflect a lower potential future value for TAST.”

I should add that when PRZ was TAST’s size, it was actually paying a token dividend. There is no near-term sign yet of a dividend from TAST.

…and yet TAST is about to suffer a lower profit this year.

All told, I think the TAST vs PRZ differences are now too great to ignore…

* Everything hinges on what the Kayes do next

The management narrative did not provide a clear explanation for the 2017 profit warning.

I can only assume the “challenging” trading environment is code for greater competition and should be expected to result in lower revenue per unit.

The RNS also mentioned an “extensive management training programme”, and I get the impression staff (and related) costs are accelerating faster than revenue.

Mind you, the Kaye family has already built two successful quoted chains, and I dare say both of those previous ventures encountered greater competition and the need for staff training.

So it’s a bit of a mystery why TAST should slip up on these issues now.

The results statement had this to say about a possible comeback:

“The Group is undertaking a full review of the estate and operational structure and is implementing a number of strategies to improve performance.

The Directors believe the Group’s core ‘Wildwood’ brand remains attractive to customers and the Group is taking positive action to address the expected financial performance and ensure growth in the future.”

Reading between the lines, that text does suggest the group’s seven dim-t outlets could be due an overhaul.

Other parts of the RNS imply some of the 13 former Wildwood Kitchen units — now converted to the Wildwood format — may be struggling.

So on those two measures at least, FUL appears to be doing quite well selling its cheaper pizzas from smaller premises, and serving lots of diners to keep sales high and rent costs relatively low.

Whatever, everything now hinges on what changes the Kaye management implement.

For now at least, I’m inclined to give the family’s track record the benefit of the doubt.

While I suspect TAST’s board may have become a little complacent in recent years, I don’t think you can lose decades of proven expertise overnight.

The 75p shares now support a £45m market cap, which with net debt added back on gives a £47m enterprise value.

Simply taking the trailing operating profit of £4,692k (before pre-opening costs), and then applying tax at the forthcoming 19% standard rate, gives earnings of roughly £3.8m or 6.4p per share.

Those sums would suggest TAST trades on a possible multiple of £47m/£3.8m = 12.4, which does not appear too demanding for a restaurant chain that is set to expand its estate by about 10% this year.

Trouble is, that 10% expansion is set to deliver a lower headline profit…

… the reasons for which are not exactly clear.

For some perspective on the 75p share price, I first purchased TAST shares at 50p during December 2011 — since when the business has tripled in size.

All told, my instinct at present is to hold on to my shares and await further developments. (If there was any selling to be done, it ought to have been done last summer)

… and I dare say a very depressed rating could soon befall TAST.

Nonetheless, further share-price declines could lead to a lucrative ‘recovery’ opportunity — assuming you believe in the Kayes of course!