Summary: A lot happened at GTC before these results and I am no longer as keen on the group as I once was. That said, the figures from this specialist data supplier to the oil and gas industry were not truly awful — a profitable second half gives hope that one day the business will recover. The asset-rich balance sheet also lends support. But a new boss and various acquisitions just don’t make me entirely comfortable. I continue to hold. 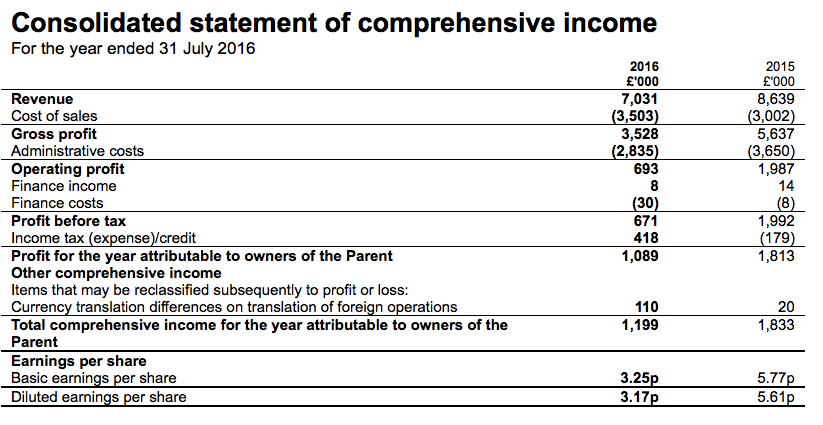 * A lot happened during the run-up to these results

There have been three significant developments at GTC since I reviewed the firm’s first-half numbers during April:

A profit warning was issued in June that blamed a “very depressed” oil and gas market. The alert was not too surprising given GTC supplies geological data to the sector, but at least the group did say it expected to generate a profit before tax for the full year.

That profit expectation was reassuring given the first-half loss, but closer inspection of these 2016 figures showed the reported profit was achieved only through a one-off gain (see later).

GTC agreed to buy this geographical information systems consultancy for £1,760k during July.

I concluded at the time that:

“It seems this deal will diversify GTC’s services to the oil sector, as well as diversify its services to outside the oil sector. As such, GTC’s dependence on its proprietary geodata libraries will diminish, which may help in the shorter term, but long term — assuming an oil-sector recovery — may not make the group’s margins and cash flow as attractive as they once were.

GTC announced the appointment of Dr Jonathan Copus as chief executive during August.

Dr Copus has worked as an exploration geologist at Royal Dutch Shell, as an equity analyst at Deutsche Bank and as chief financial officer at Salamader Energy. He is only 44, too.

The appointment did not look too bad in the circumstances.

* GTC diverging from my portfolio

When I bought my GTC shares during 2013 and 2014, the firm had been run by a long-time employee, had not bought other businesses and appeared to boast an array of lucrative, proprietary data.

All that was enough to keep me holding the shares as the business suffered from the oil-price crash.

However, now there is a new chief exec, while the aforementioned Exprodat deal and the larger ERCL purchase have signalled (perhaps) that the proprietary data may not be all that lucrative anymore.

As such, I am starting to feel there may be better long-term homes for my GTC money.

You see, what has become (belatedly) obvious to me is that GTC does not compare too well to, say, BrainJuicer and Bioventix — two new shares I bought earlier this year — both of which are run by long-time, owner-founder executives who don’t rely too much on acquisitions for growth.

* What the small-print revealed about the predicted profit

These annual results were the worst for some years:

Reported revenue dropped 19%, though don’t forget the 2016 performance was supported by a full-year contribution from ERCL.

An operating profit of £693k was declared, although the small-print revealed the results were boosted by a one-off £845k gain (my bold):

I think it was somewhat cavalier of the group to suggest in June that these results would show a pre-tax profit — and not explain that such a profit would be underpinned only by this one-off gain.

(At least the new chief exec had yet to be appointed when June’s statement was issued.)

* A much better second half

A few extra contracts talked about at the half-year stage combined with an underlying 17% reduction to the cost base gave rise to a second-half profit.

Adjust for the aforementioned £845k gain and the H2 operating profit would have been £545k.

Still, that level of H2 profit does not feel too bad in light of the first-half loss and June’s profit warning.

Although GTC’s cash flow shows nothing obviously untoward, there are a few niggles.

Capitalised development costs is now one area I’m unsure of.

In the past I had concluded the firm’s hefty intangible expenditure — which is not charged against profit but instead travels directly to the balance sheet — related to a certain multi-satellite project.

Expenditure of £824k and associated amortisation of £479k leaves a £345k difference — which is a notable sum for this small business.

I do not mind capitalised expenditure, just as long as the associated amortisation is adequate and reported profit is not boosted artificially.

Elsewhere in the numbers, GTC’s total working capital-movement for 2016 did not look too worrying.  But I did notice stock levels surge by a significant £775k to £1,067k: 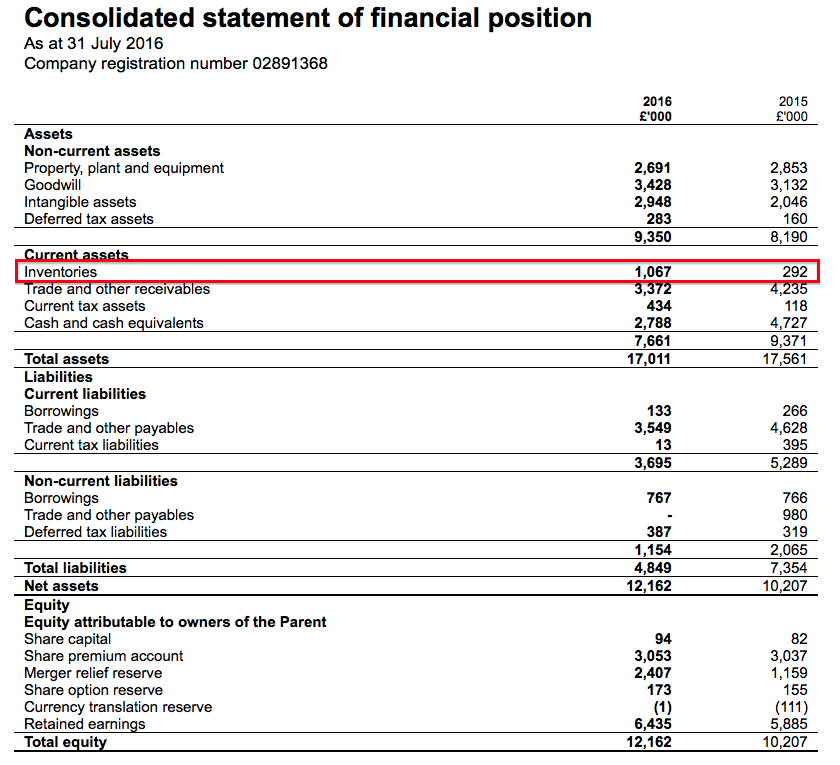 At least GTC suggested the movement was more of a timing issue than a backlog of unsold products:

“Inventories have increased by £775,000 over the year (2015: £112,000) due to the timing of the multiclient Regional Reports product cycle, with several new reports nearing completion at the end of the financial year, creating new products to be sold in 2017.”

Alongside net cash of £1.9m, there is freehold property that should continue to carry a £2.5m book value (the upcoming annual report should confirm this).

One notable balance sheet movement is the disappearance of a long-term £980k liability: 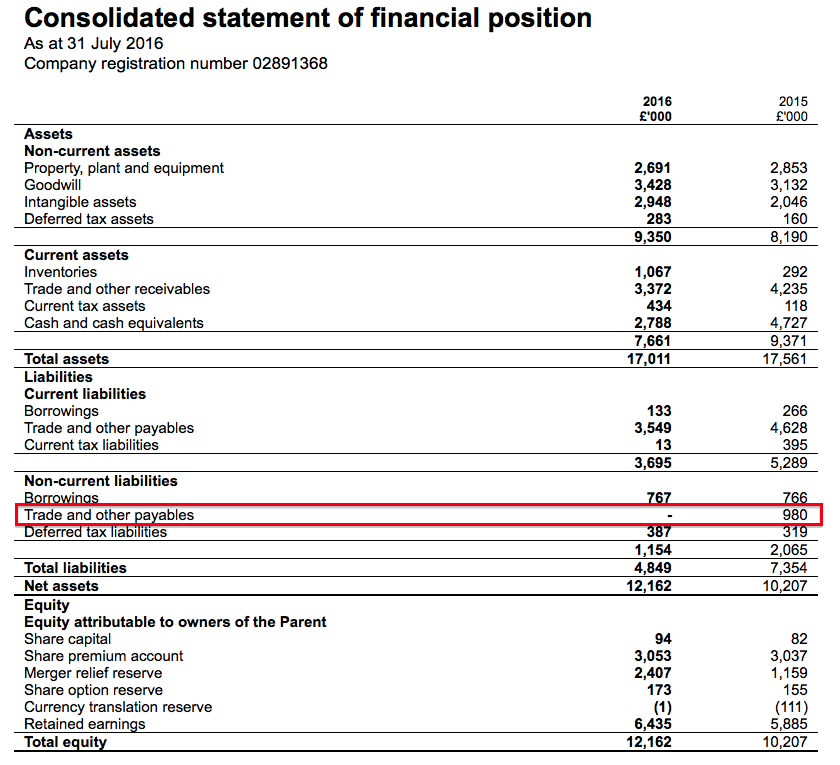 I had sensed this earn-out was somewhat high given how the wider group had performed following the acquisition.

Anyway, the £980k cancellation relates to the aforementioned £845k one-off gain (my bold):

“Getech’s second half profit before tax amounted to £1,375,000. This included an £845,000 write-down adjustment made to the fair value of the ERCL acquisition earn-out provision (the amount by which the total cash consideration for the ERCL acquisition has reduced from our original expectation).”

To cut a long story short, I reckon the earn-out provision is now £135k and has to be paid during the current financial year (to July 2017).

* A handful of positives to support a recovery

The management narrative contained a few paragraphs of hope for shareholders (my bold):

“While the market is at best uncertain, our dialogue with our customers remains vigorous and the Group has a pipeline of significant sales proposals awaiting approval. As we approach the end of our customers’ budget year, for the first time in several years, feedback from clients leaves us encouraged by the market mood; the recent increase in the oil price gives our customers more confidence that their budgets will become available in 2017.”

“Having built an unparalleled suite of global geological and geophysical knowledge bases, Getech is now moving towards a model where the Group is focussed on enhancing this offering through providing better access to its data sets and refocussing its products and services so that they more specifically address the commercial challenges faced by our customers.”

“As a key part of its activities, Exprodat has developed, and licenses commercially, several GIS software packages that support petroleum exploration. During the current downturn, the client retention of these subscription-based software products has been approximately 95%; this brings a substantial client base to Getech, with a significant proportion of recurring income.”

At what point any of this eventually translates into a proper recovery unfortunately remains anyone’s guess.

But if a recovery does arrive, GTC may once again sport some attractive financial ratios. The operating margin and return on average equity in particular could rebound to past highs:

I am not really tempted to buy more GTC shares because of my earlier comments about the company diverging from the bulk of my portfolio.

However, for now at least, the business has net cash, enjoyed a profitable H2 and still provides a range of specialist data and services — although revenue from the wider group is now increasingly earned from other products.

I suppose one day I could look back at GTC and declare the current 28p share price as having been a superb buying opportunity — assuming the oil and gas sector recovers and GTC capitalises on the revival.

In the meantime, though, I guess other businesses with greater tenured management and less dependence on acquisitions could also generate robust returns.

2 thoughts on “Getech: H2 Profit Reported But I Am Not Entirely Convinced”