Summary: These figures were not too disappointing given MCON’s lacklustre first-quarter statement. A definite improvement occurred during Q2 and 15% margins suggest MCON retains a respectable competitive position. Nonetheless, the firm’s acquisition strategy remains unproven and working-capital demands are still very high. While a P/E valuation of 12-14 does not tempt me to top up, I continue to hold. 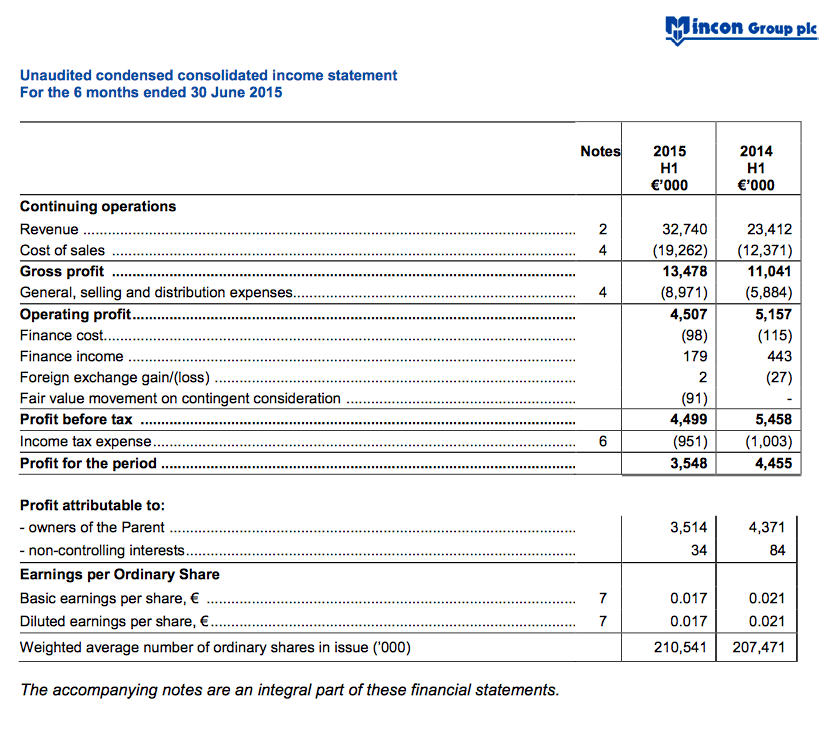 * The performance was not too disappointing

Given the lacklustre first-quarter update issued in May, these interim numbers did not look all that bad. Certainly the business fared better during the second quarter:

From the quote above, I’ve estimated MCON’s Q1 and Q2 performances below:

So yes, a definite improvement from Q1 to Q2.

I like the fact MCON didn’t present the accounts with an adjustment for “one-time costs of €380,000 associated with acquisitions and restructuring” — it suggests the executives are conservative with their financial reporting.

Nevertheless, after adding back the one-time costs, first-half operating profits did drop 5% on last year as MCON succumbed to “pressure on pricing”.

However, first-half gross margins of 41% exceeded the 40% recorded during the second-half of 2014. So perhaps the customer pricing pressure may have stabilised for now.

During the 18 months to June 2015, the group spent €10m on purchasing smaller subsidiaries — and there are still no obvious signs that the corporate activity has enhanced returns for shareholders. As far as I can see, none of the deals has so far contributed much (if anything) to profits.

Nonetheless, I guess the best time to snap up rivals is when an industry faces tough times, sector profits are depressed and sellers can’t command premium prices.

Presumably once the mining cycle has turned and demand for drilling equipment rebounds, the advantages of MCON’s deals — and the resultant wider product range and distribution reach — should become plain to see.

For what it’s worth, MCON reckons it has “significantly improved” its market position and that its “investment strategy remains intact”. The group still has €34m of net cash to spend on deals.

These results revealed €5.3m being diverted into working capital, which is a substantial movement when operating profits (before one-time items) were €4.9m: 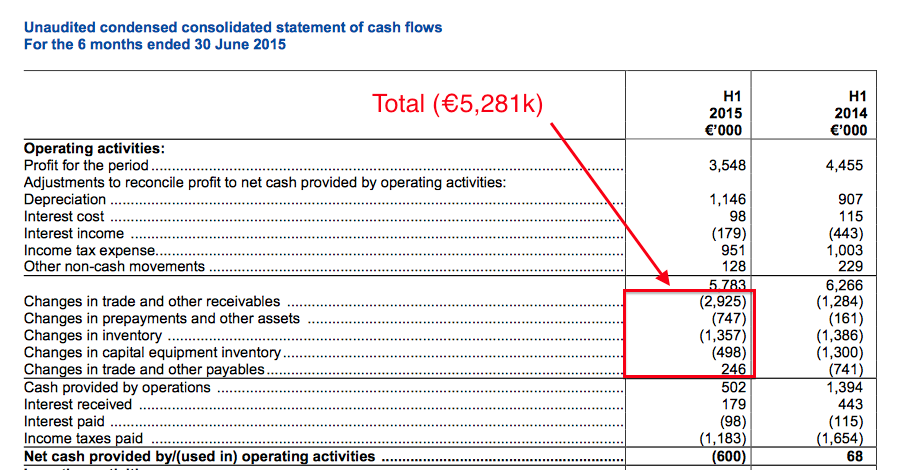 As such, there was no free cash generated during the six months.

I explained MCON’s working-capital requirements within my original write-up, and I had hoped there may have been some improvements by now.

At least management says it is on the case, stating it “remains cognisant of the need for a disciplined approach to working-capital management and is taking initiatives to reduce working-capital levels while continuing to invest for future growth”.

I look forward to some reductions during the second half of the year.

For now though, the cash-flow situation has meant the interim dividend has been held at €0.01 — and the annual report small-print did suggest the full-year payout would be held at €0.02, too.

With MCON’s tax rate rising from 18% to 21% following changes to the geographic spread of revenue, current-year earnings could be £5.4m or roughly 2.6p per share.

Alternatively, annualising the stronger Q2 performance gives earnings of €8.8m or roughly 3.0p per share. The EV multiple on that EPS estimate comes to 12.4.

Meanwhile, a maintained €0.02 annual dividend would supply a 2.9% income.