Summary: These were quite reasonable results, given MCON is still plugging away serving the subdued mining sector with its heavy-duty drills and bits. The introduction of a new accounting policy was disappointing, although the chief exec’s bullish commentary was encouraging and suggested the group’s expansion could accelerate in the years to come. Such growth ought to improve MCON’s rather average margin and return on equity numbers — at present those ratios may not be doing justice to the group’s competitive position. I continue to hold. 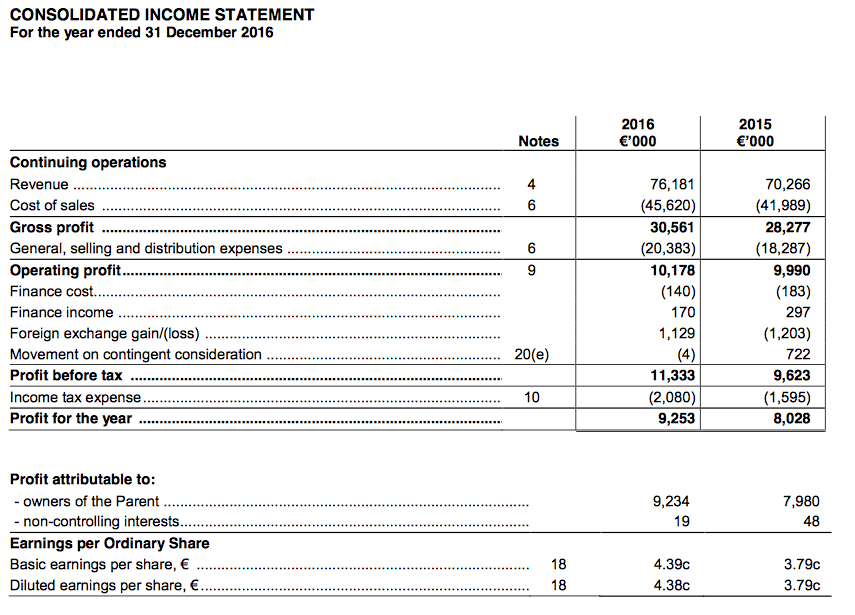 I was broadly satisfied with MCON’s annual results, which showed revenue up 7% and operating profit up 2%.

Various acquisitions this year and last ensured annual revenue reached a new peak during 2016, although profit remains below that recorded during 2011, 2012 and 2013:

Nonetheless, shareholders were told that revenue growth was attributable to both in-house products (up 7%) and third-party items (up 13%), and was recorded in America (up 13%) and Australia (up 25%). Oh, and currency moves knocked €1.5m from the top line.

The statement’s clear highlight was the chief exec’s outlook commentary. The following extracts are the most optimistic I have seen from MCON for some years (my bold):

“The Mincon Group took stock in 2016…as we move towards building a 2020 strategic plan, and setting aggressive objectives for growth in sales and profits.”

“There has been a tone change in the market in 2016, the prices of commodities are on the rise, the companies in our sector speak with a new confidence and enthusiasm, and we see early evidence of renewed interest in reopening and developing business in some of the markets and sectors in which we operate.”

“We have an experienced management group, adequate funding, excellent products and an exciting product stream and I look forward to reporting on further progress in 2017 and beyond.“

* H1 vs H2 and the best-ever quarter for revenue

I think the H2 shortfall was due mostly to a freakishly good Q3 during 2015, rather than a disappointing performance during 2016.

I am pleased that MCON’s gross margin was sustained at a 40% average throughout 2016, and that Q4 actually recorded the group’s best-ever quarter for revenue:

These results showed the full-year operating margin dropping a percentage point to 13%.

I must confess, that level of profitability is not spectacular for a business that claims its “highest design specifications” and “best manufacturing methods” make it “the driller’s choice worldwide”.

A few years ago when the mining sector was much healthier, MCON’s margin was more than 20%:

Mind you, I do get the impression MCON’s lower margin is due partly to greater product investment and development. This latest RNS included the following hints about where the expenses are going:

“The year has been one of investment for the future, in people, manufacturing capability, engineering design and future products.”

“We have also begun the investment in our carbide plant, with new multi process machinery for powder production, robotised button pressing, and new machinery to insource components for the rest of the Group.”

“We have other products in development and are looking to considerably step up that investment for the current year. Essentially we are building out a new category and are planning a soft release toward the end of the coming year.”

I bet the reference to “considerably step up that investment” is signalling greater costs and/or a lower margin for 2017.

The earlier table shows the lower margin achieved during the last two years has in turn depressed MCON’s return on average equity to a modest 13%.

MCON’s H1 update revealed nothing in the way of free cash was produced during the first half, and my sums indicate less than €1m was produced for the full year.

The main cash-drain was capital expenditure, which used €5.2m throughout 2016 and presumably was associated with the aforementioned new-product development. MCON’s Q3 update had disclosed the existence of a “three-year plan”, which implies the heftier capex is set to continue this year and next.

Meanwhile, working-capital movements for the year did not appear too bad, with a net €1.2m being absorbed into stock, debtors and creditors. However, I do recall MCON’s H1 statement  suggesting the overall movement would be closer to zero for 2016.

After these results, I am now more hopeful that MCON will be able to prevent repeating the large working-capital outflows seen during 2012 and 2014.

That said, MCON’s warehouses continue to hoard immense amounts of stock — €35m at the year-end, compared to revenue of €76m.

Furthermore, past-due invoices currently represent 21% of all outstanding invoices, which is notably higher than the 9%-14% range seen during the previous five years:

Indeed, the Q3 update ominously referred to some debtors being on a “work out”. I think that was code for MCON trying to “work out” whether those invoices would be paid or not.

* “A distortion to short-term earnings”

Something new — and unwelcome — to MCON’s accounts was the capitalisation of certain R&D costs.

MCON had previously written off all R&D costs as incurred, and I had warmed to such conservative bookkeeping.

However, these results unveiled costs of €500k side-stepping the income statement to instead be placed on the balance sheet:

“We have capitalised €499,000 in development expenditure in 2016, which we expect to begin to release as a particular set of products become commercialised in the next year or so.”

This next quote prepares the ground for greater capitalisation for 2017 (my bold):

“While this is not hugely material as it stands and we have historically written off R&D as we spend it, we are going to have to step up the expenditure around this project in order to bring it to a commercial proposition with an accelerated timetable.”

What unnerves me about this accounting change is that it was implemented (perhaps) to ensure reported earnings would not suffer:

“We have addressed the matter in 2016 as otherwise the expenditure in 2017 would potentially cause some distortion of short term earnings.”

Oh dear. I reckon most investors will easily see through the forthcoming earnings flattery.

I just hope MCON’s amortisation policy will write off this expenditure sooner rather than later. No amortisation was applied during 2016.

Cash in the bank dropped from €41m to €37m during the year, and the funds remain available for acquisitions.

However, MCON did reinforce comments from previous updates that it was particularly choosy when it came to evaluating potential purchases. As far as I can tell, the main focus at present is organic expansion (which I welcome).

(Past acquisitions have not been too grandiose anyway, with €16m spent on nine deals during the last three years.)

The balance sheet also carries debt of almost €2m and a deferred-consideration liability of nearly €6m, which leaves effective net cash at about €29m.

Dividing that 63p per share EV by my 3.4p per share EPS guess gives a multiple of 18 at the present 75p mid-price.

I think the group would really have to deliver on the chief exec’s optimism for the next year or two for that rating to be viewed as an obvious undervaluation.