Summary: These impressive annual figures confirmed BJU had enjoyed a magnificent second half. The market-research pioneer confirmed all of its core products had performed well, including the group’s best-selling system that had suffered a wobble during H1. I’m also pleased the accounts remain first class, while it’s not surprising the share-price rating is now expecting further robust growth. However, the usual “limited visibility” of client orders remains a drawback. I continue to hold. 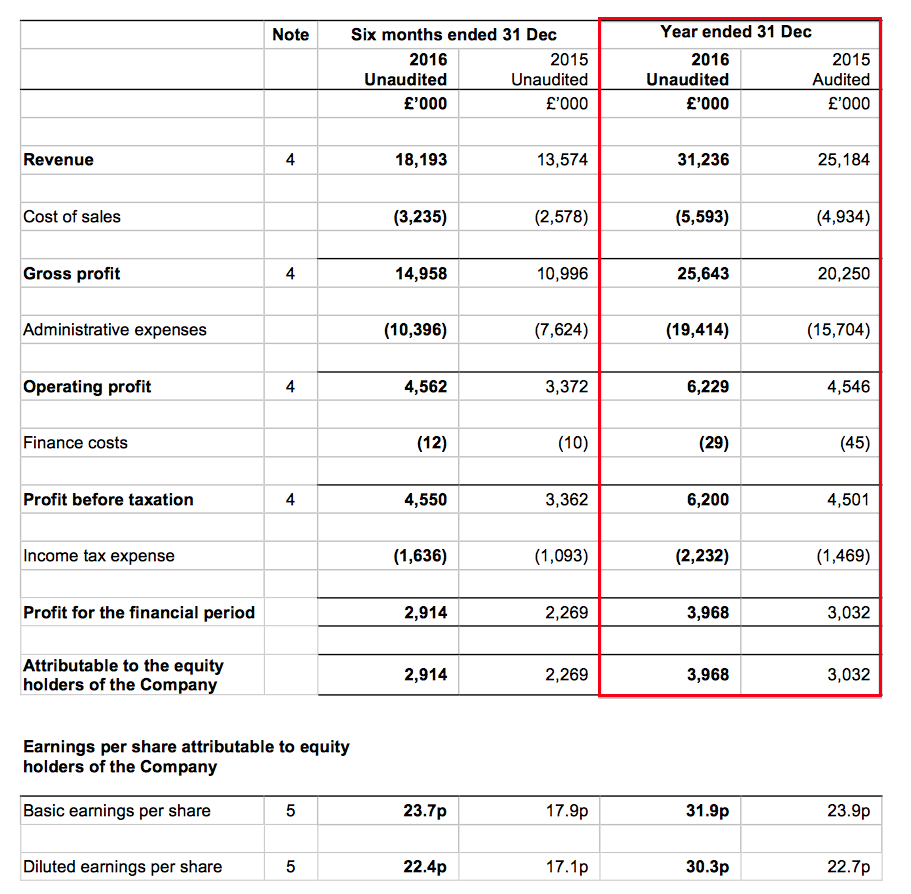 * These results were very respectable

Trading updates during December and January had already signalled these results would be very respectable.

In the event, BJU reported revenue up 24% and gross profit — the firm’s “main top-line indicator” — up 27%. Both advances would have been 15% without favourable currency movements.

Certainly the second half enjoyed a greater rate of growth than the first:

BJU’s H1 statement indicated the group’s first half had enjoyed about 10% growth adjusted for currency movements, and I’m guessing the second half must have experienced something close to a 20% underlying advance.

It’s probably fair to predict 2017 will witness further progress, if only from favourable currency factors.

US customers represented 42% and other overseas clients represented 33% of BJU’s gross profit during the year, and the first six months of 2017 ought to benefit from the weaker, post-Brexit GBP in comparison to H1 2016.

Something to note about these results was the absence of a final dividend. BJU is shifting its year-end to March and will declare a final payout when the group publishes its 15-month results during June.

* A new “express” product appears to have steadied the earlier wobble

I was pleased to see BJU’s core products all performing well after a small wobble at the half-year stage.

September’s interims revealed the Predictive Markets service — the group’s largest fee-earner — had suffered a 4% gross-profit drop during H1. At the time, BJU referred to “pricing pressure” and plans to launch a cheaper “express” version.

Overall, gross profit from BJU’s core products advanced by 18% for the year. The group claims much more of the income from these services is now “ongoing in nature” rather than “ad-hoc”.

The chart below from BJU’s shareholder presentation is useful. It shows that gross profit from the group’s main products has surged from about £7.5m to beyond £20m between 2011 and 2016: 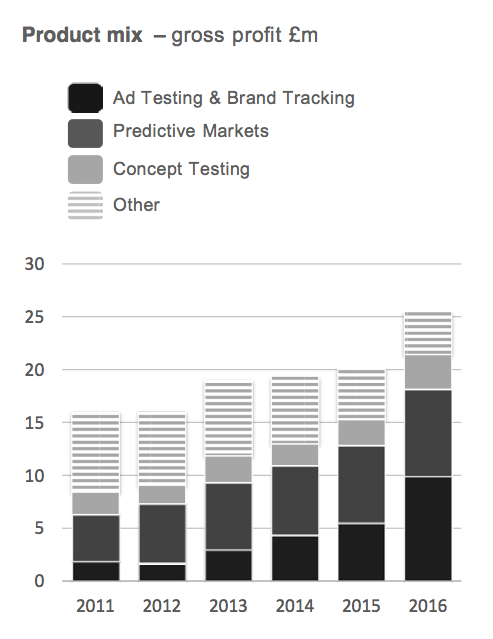 Once again I could not fault BJU’s accounts.

Cash capital expenditure continues to be more than covered by the depreciation and amortisation charged to the income statement. Meanwhile, working-capital requirements continue to be modest and last year produced a favourable inflow of cash.

The super cash generation allowed £3.5m to be spent on buybacks,  £2.1m to be spent on ordinary/special dividends, and £1.4m to be added to the bank balance. The £7.8m year-end cash position is equivalent to 64p per share. BJU continues to operate without debt and remains free of any final-salary pension obligations.

BJU’s operating margin increased once again and, at 20%, supports the notion the business enjoys a lucrative advantage with its ‘System 1’ market-research techniques. (The margin is even higher if you consider gross profit to be BJU’s “main top-line indicator”):

The return on equity figures (adjusted for the cash position) continue to be astounding as well:

BJU’s outlook was the usual mix of optimism and caution:

“We will continue to focus on our core products, particularly Ad Testing and Brand Tracking where we are beginning to get a foothold in large clients.  These products are comparatively easy to grow and scale, and they also provide more revenue visibility than our other products.”

“Nevertheless, our business still remains predominantly ad hoc, with limited revenue visibility, and as always we need to acknowledge that we cannot predict with very much certainty how revenue growth will unfold over the coming financial year.

“Having said that, we are pleased with the continued progress across the business and remain confident in its long-term potential.”

Dividing that 656p by my 34.2p earnings per share figure gives a P/E of 19. I suppose that rating is understandable given BJU’s 15% (or more) organic expansion rate and a stock market that’s currently biased towards growth shares.

I must admit, it was much easier to determine whether BJU offered good value around this time last year — when the business had already started to return to double-digit growth yet the shares were rated on a multiple of only 11.

For the record, the trailing ordinary dividend remains at 4.6p per share and supports a tiny 0.6% income.