Today I’m continuing my hunt for possible investments by revisiting Shoe Zone (SHOE). I first placed this company on my Watch List during March 2015.

Here are the attractions that prompted this revisit:

* Generous dividend payments: The group will soon have distributed all of its earnings as ordinary and special dividends for the last two years

A potted history of the group is shown below: 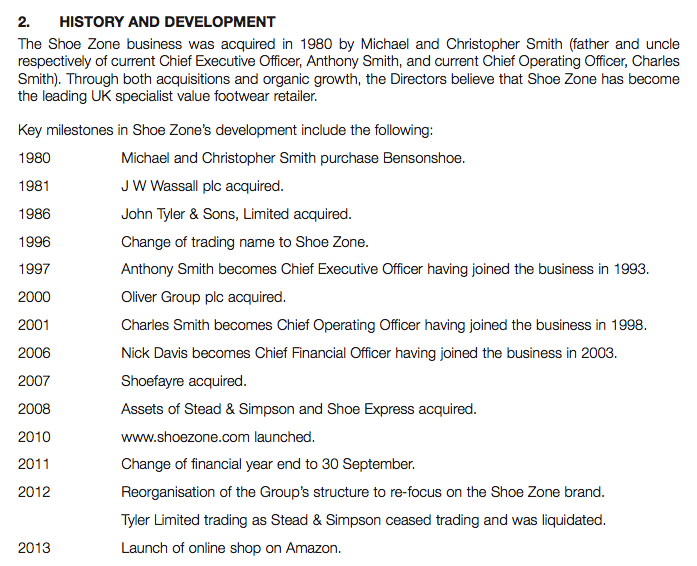 The archives show that revenue was £116m and operating profit was £7m during 2005, with revenue having climbed to £160m and lifted operating profit to £10m by 2016. The average compound rate of expansion during those 11 years was a pedestrian 3% per annum.

SHOE reached a high-water mark during 2009, as acquisitions then took revenue to £246m and operating profit to £15m. Progress thereafter has been somewhat haphazard, as a reorganisation culled more than 100 stores and placed under-performing subsidiaries into liquidation.

The last few years have offered an inconsistent performance, with revenue sliding as shops were closed:

The ‘other items’ recorded in the table above relate to the 2014 flotation. At least the mixed track record post-listing has not been clouded further with extra ‘exceptional’ costs.

The latest balance sheet carries no goodwill and no acquisitions have occurred since the flotation.

The 2016 balance sheet displayed share capital of £3m versus earnings retained by the business of £26m. The group carries no debt.

Bear in mind that SHOE’s cash position is flattered by significant trade and other payables — that is, money SHOE owes to suppliers and other creditors. At the last count, such sums came to £28m — versus just £7m effectively owed to SHOE by suppliers and other debtors.

As such, I would not say that SHOE’s £15m cash position is entirely surplus to requirements. I note the 2016 results stated the business now plans to operate with at least £11m in the bank at each year-end.

Elsewhere on the balance sheet, the group’s final-salary pension deficit is an obvious drawback.

A rule-of-thumb I have with pension deficits is to be wary of companies with deficits that are greater than their annual profit. I’m careful of large deficits because they can start to absorb extra cash and leave less money for dividends.

Sadly, SHOE’s funding shortfall has swelled from £5m to £13m during the last two years, and currently looks sizeable when compared to the annual £10m operating profit.

Compared to other quoted companies with pension schemes showing deficits, I feel SHOE’s £472k contribution is somewhat light and probably ought to increase. The 2016 results said the group was “in discussions around the ongoing funding with the [pension scheme] trustees”.

When I first reviewed SHOE, I discovered the business was not locked into costly and lengthy shop leases. Happily that situation remains the case:

Dividing the total future lease commitment (£70m) by the lease payment for 2016 (£22m) suggests the average lease has only 3.2 years left to run.

For the last five years, the aggregate depreciation charged against earnings has been well ahead of the total cash spent on capital expenditure.

However, the 2016 results did say capex would increase by £1m for 2017 to help pay for new stores, refit existing branches and improve the head office.

Meanwhile, working-capital movements since 2012 have added up to produce only a  £1m outflow of cash.

Overall, SHOE’s cash generation has been impressive enough to have pushed net cash from £5m to £15m between 2012 and 2016 — and that is after the business paid cash dividends of £19m during the same time.

The flotation prospectus lists the large store network, the Shoe Zone brand, the extensive product range and the in-house logistics as elements of the group’s strengths.

However, as I wrote two years ago, I reckon everything boils down to employing tip-top management — as it always does with retailers. I suppose the board’s long-standing relationships with various Chinese shoe manufacturers may be helpful.

A 6.5% operating margin for 2016 seems impressive for a discount retailer, and suggests the group has developed a welcome, low-cost working culture. That, too, may keep SHOE ahead of its rivals.

Yes — or at least it has since the flotation.

A lack of working capital tied up in the business — stock of £30m is counterbalanced almost entirely by the aforementioned £28m of trade creditors — is the main reason for the impressive returns.

That still depends on your view of SHOE’s track record.

The group is led by brothers Anthony and Charles Smith. Anthony was appointed chief executive during 1997 and then executive chairman last year. Charles has been a board executive since 2001.

Anthony Smith is 49 years old and Charles Smith is 51. Backed by their major shareholdings (see below), both men could be spear-heading this business for some time to come.

SHOE’s other executive was appointed as finance director in 2006 and became chief executive in 2016.

Last year Anthony Smith collected a £250k basic salary while brother Charles collected £200k. Those pay packets do not look outrageous to me for running a £10m-profit business.

Neither Smith has received any pension payment nor any bonus since the flotation  — suggesting some restraint pay-wise.

The Smiths sold 45% of the business at the flotation and a further 5% during 2015. They presently retain a combined 50% stake with a current £45m market value.

Special dividends declared for 2015 (6p per share) and 2016 (8p per share) support the notion the executives are behaving sensibly with the group’s surplus cash.

I like the fact SHOE’s ordinary and special dividend for 2016 will mean the Smith brothers will enjoy an aggregate dividend payment of £4.5m — a sum well ahead of their combined basic pay.

I also love the absence of an option scheme.

“Shoe Zone has made a solid start to the year and trading is in line with expectations. We are making good progress against our strategic objectives and the board remains positive about the outlook for the Group for the remainder of the year.”

The strategic objectives mostly involve re-jigging, re-fitting and re-locating the current network of shops. Essentially smaller premises are being swapped for larger units in the hope of generating greater sales. There are 510 outlets at present and the group claims “approximately 500” is the right number for standard Shoe Zone branches.

The only expansion of sorts is a trial of larger ‘big box’ stores, which will all operate with “a new contemporary format, offering a good brand mix, extended product range and broad customer appeal.”

However, just three ‘big box’ outlets are open at present and only another six are planned for 2017.

Anyway, what is quite worrying with SHOE’s store rejuvenations to date is that revenue per outlet has actually been shrinking. Here are my sums:

I would have thought revenue per average store would be rising.

Either way, this revenue-per-store trend suggests to me there could be inherent trading issues at the chain. The shop refits and relocations have been happening for some years now and I am starting to wonder if SHOE is in fact a shrinking business.

I am not surprised near-term profit growth is predicted to be limited. Broker forecasts signal earnings being maintained around — or just above — the 17p per share level for 2017 and 2018.

Meanwhile, the trailing 10.1p per share ordinary dividend supplies a 5.6% income. Include the 8p per share special dividend, though, and the yield tops 10%.

However, I would not bank on a repeat of an 8p per share special dividend for 2017.

For one thing, the aforementioned £1m increase to capital expenditure will cost an extra 2p per share of cash flow. There may be a possibility of greater pension contributions, too.

Is it worth watching Shoe Zone?

As before, the real attraction here is the long-standing family managers.

They presumably know the sector inside out and look to be the owner-orientated types with £45m still riding on the share price. I particularly like how they are distributing surplus cash as special dividends and can manage the business without an option scheme.

But I did say two years ago that I was surprised the veteran bosses allowed themselves to reach a point where 100-plus under-performing shops had to be closed.

And now I wonder whether revenue is also shrinking because SHOE is losing ground to rivals.

Simply put, I just don’t understand why revenue per store is declining despite all the branch refits and relocations. I have noted SHOE’s annual reports do not disclose like-for-like sales and I think I understand why.

All that has left me pondering whether SHOE’s shares are a value trap.

True, the dividend alongside any special payouts could yield 6%-plus. But underlying revenue appears to be retreating every year… and it’s difficult to imagine a notable improvement occurring anytime soon.

Excuse the pun, but unfortunately I feel I now have to give SHOE the boot from my Watch List.

Disclosure: Maynard does not own shares in Shoe Zone.

7 thoughts on “Shoe Zone: I’m Worried About Revenue And Have Given The Share The Boot”