Summary: A satisfactory set of results, which I reckon included the drill specialist’s best quarter as a quoted company. Revenue and profit continue to head the right way, although working capital and other investments absorbed considerable cash flow. Notable positives from the statement included comments on new product development alongside vague talk of recovering demand from mining customers. I continue to hold. 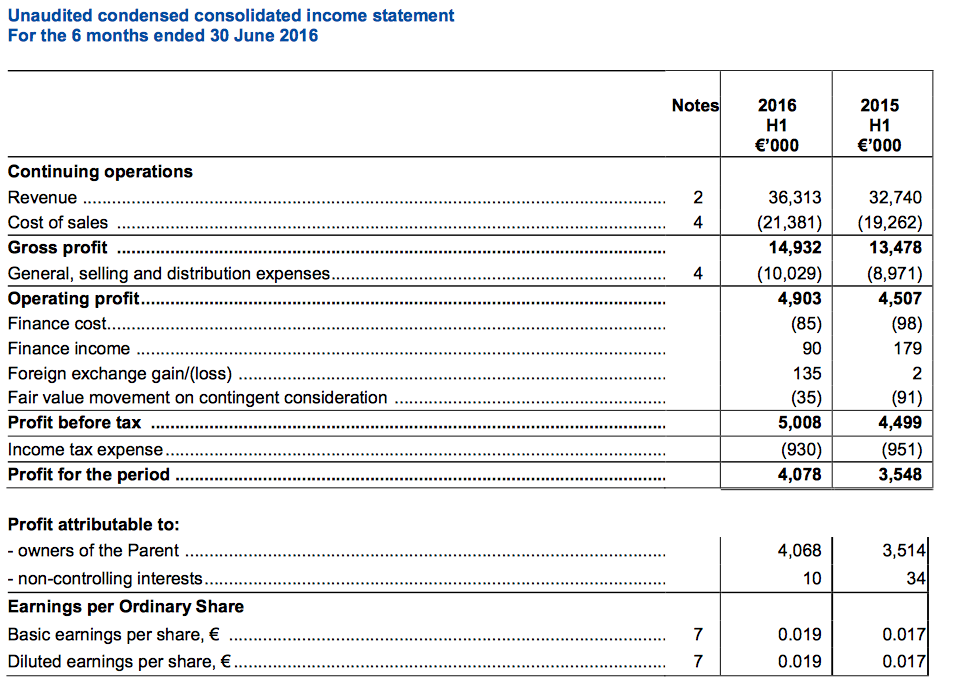 * The performance was indeed “relatively satisfactory”

I’d agree with MCON’s description of these results being “relatively satisfactory”, with first-half revenue up 11% and operating profit up 9%.

MCON’s Q1 statement from May had already admitted the top line was helped by the “impact of [prior-year] acquisitions”, although these results did claim H1 sales were assisted by market-share gains, too.

The statement also suggested some hope for further revenue improvement.

Many purchasers of MCON’s drills are miners and apparently “there are improvements in some commodity prices and certain end-markets appear to be beginning to return to growth. This should lead on to a recovery in the exploration businesses in due course and then across the mining sector.”

MCON added: “We believe that the underlying tone is improving, even if this is anecdotal rather than observable.”

Based on previous statements and my earlier calculations, I’ve estimated MCON’s Q1 and Q2 performances below:

My sums suggest this Q2 was MCON’s best quarter for revenue and pre-tax profit following the firm’s flotation during late 2013.

I like how once again MCON did not present the accounts with an adjustment for seemingly one-off costs — it suggests the executives are conservative with their financial reporting.

Anyway, the management narrative accompanying these figures referred to “incurring a €0.4 million charge to reduce head count in operations” — which is not insignificant when the reported operating profit was €4.9m.

Bear in mind, however, that last year’s interim statement referred to “one-time costs of €380,000 associated with acquisitions and restructuring”.

Ignoring the seemingly one-off costs, the operating margin during this first half was 14.6% — quite respectable considering MCON has sizeable exposure to the subdued mining sector.

In addition, I was pleased MCON’s gross margins were sustained at 40%-plus throughout the half following the variable performances seen last year.

* Acquisitions on hold for now?

You may recall MCON declared a bold expansion policy at its flotation, which included spending €10m-€30m on individual acquisition targets.

As it happens, the firm has since purchased seven smaller subsidiaries for a total of €10.3m, with a further €6.3m to be possibly paid in future depending on whether certain earn-out targets are met.

So far during 2016, MCON has not spent a penny on deals and this management comment explains why:

“We have been active in approaching potential acquisition targets, but we did not see value for the Group in the terms that were being sought by vendors, compared with the cost of investing in our own engineering competencies to build a competitive offering.”

“We have elected to invest primarily in organic growth rather than exhaust our resources by buying that which we could competitively make ourselves. We also continue to invest in new products as they move into beta testing from the research stage, and in keeping with our R&D policy, we expense those costs as they are incurred.”

I applaud MCON’s decision not to overpay for other businesses and to instead develop new products itself. Progress may be a little slower, but the returns on investment ought to be much greater with the sums not involving payments of goodwill ‘premiums’ to former owners.

MCON claimed sales from the new products under development ought to start next year.

MCON’s full-year results had previously indicated an improvement to the firm’s working-capital management during the second half of 2015.

However, these results revealed €4.6m being diverted back into stocks, debtors and creditors, which is a substantial movement when operating profit (before one-time items) was €5.3m. In fact, nothing in the way of free cash was produced for this half year: 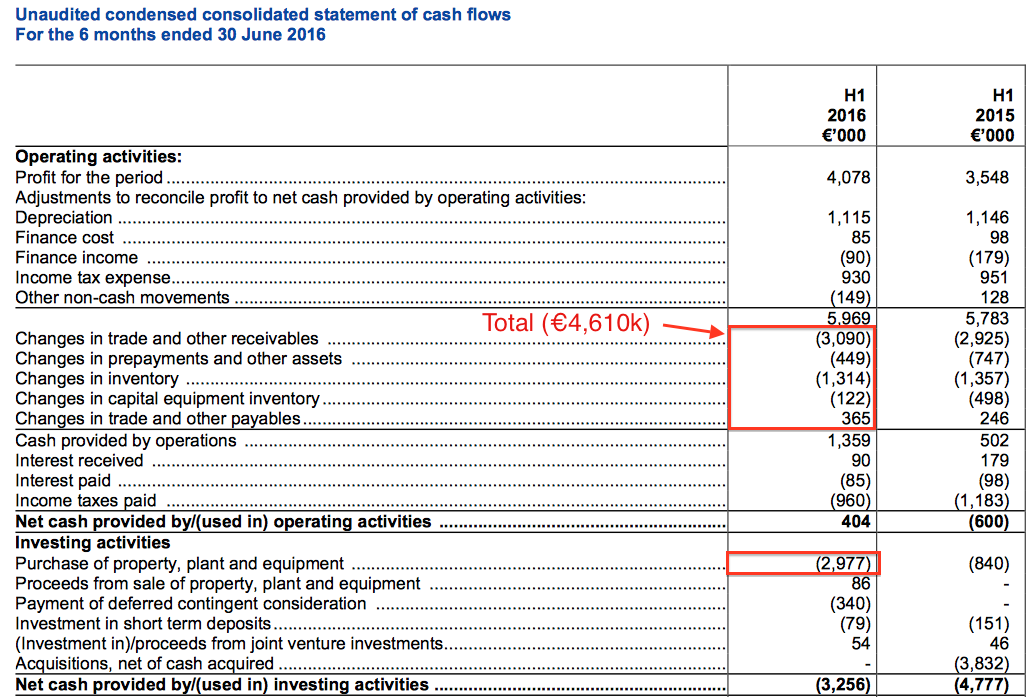 However, it does seem MCON’s cash-flow movements are seasonal (my bold):

“Inventory has seen some growth since the year end, due to a number of factors including replacing inventory that was previously consignment inventory from third parties, and taking back inventory from distributors being replaced by our own subsidiaries. Raw materials also increased as orders reached a seasonal peak for volumes to be delivered in the second half.

Working capital again absorbed approximately €5 million of cash in H1 as it did during the same period last year, and if the cycle follows through we should aim to recover this from working capital by the year end, subject to the requirements of the new product cycles.”

I note the largest working-capital movement within these results involved trade debtors. Although the accounting small-print admits past-due invoices have expanded to represent 13% of all outstanding invoices, that percentage is within the range seen since 2012:

The earlier cash-flow statement also flagged expenditure of €3m on new plant and equipment — well above the €1m charged as depreciation. The extra capital expense related mostly to the aforementioned new product development.

Following the hefty working-capital and plant expenditure, MCON’s net cash was left €5m lighter at €33.8m — of which €6.3m could still be paid to vendors of past acquisitions.

The interim dividend was held at €0.01 per share, which suggests the full-year payout will be €0.02 per share for the third year running.

Dividing that 50p per share EV by my 3.6p per share EPS guess therefore gives a multiple of 13.8 at the present 60p offer price.

Meanwhile, a maintained €0.02 annual dividend would supply a 2.6% income.

No trolls. No memes.
Enjoy a higher standard of investment discussion at Quidisq.
Join today