Summary: These far-from-spectacular figures were no surprise. Indeed, both revenue and profit have stagnated for five years now and there was no real suggestion that improvements will occur anytime soon. What’s more, a new regulatory risk was disclosed that may hinder progress :-( Nevertheless, this specialist currency manager did talk of future special dividends, while the high-margin, cash-rich nature of the business remains attractive. I reckon the underlying P/E is 8 and the yield is 6%-plus, and I continue to hold. 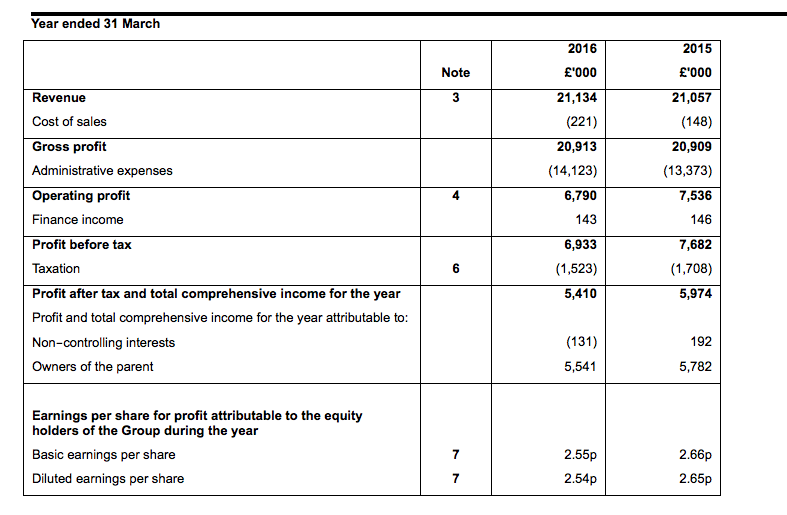 November’s frustrating interim results, followed by trading updates in January and April, had already signalled REC’s full-year performance would be far from spectacular.

In the event, revenue remained static at £21m while operating profit dropped 10% to £6.8m. The table below shows the business having effectively stood still throughout the last five years:

REC managed to maintain its revenue because lucrative — but short-lived — client mandates won during the year offset the mandates that were lost.

Overall, effective client money under management dropped by $1.7bn to $53.4bn for the twelve months, and it was the first year in the last five to see a net outflow of client assets:

“The market environment has become more challenging, with a general absence of persistent themes of individual currency strength or weakness, narrowing expectations of interest rate differentials, and a prolonged decline in emerging market currencies.  As a result, a wide divergence of views has emerged amongst investors as to their preferences in managing currency risk and opportunity.”

At least management-fee rates were largely sustained on last year (and unchanged since the half year):

…and that a small performance fee of £315k was earned (suggesting at least something is going right with REC’s currency-management strategies).

Also worth noting is that Passive Hedging, REC’s lowest-margin service, has for the first time become the group’s largest fee-producing division:

REC claimed the Passive Hedging division provides a “strong and stable revenue stream”, presumably because Swiss pension funds are required by regulation to use such hedging.

For 2015, a quarter of revenue was derived from such Swiss clients and I estimate a similar proportion was received during 2016.

REC’s 10% profit drop was due largely to a company-wide 10% pay rise for staff. The extra payments were “in response to the general trend of higher fixed remuneration in the financial services sector”.

I’ve written before about this pay rise being somewhat galling for shareholders, who have witnessed their own dividend income stall this year as REC’s revenue goes nowhere.

Sadly there wasn’t any headcount reductions to mitigate the pay rise. In fact, staff numbers increased by one during the year, and the cost of employing the average staff member remains high:

Lucky REC staff were also awarded four million options during the year to take their total to 13 million: 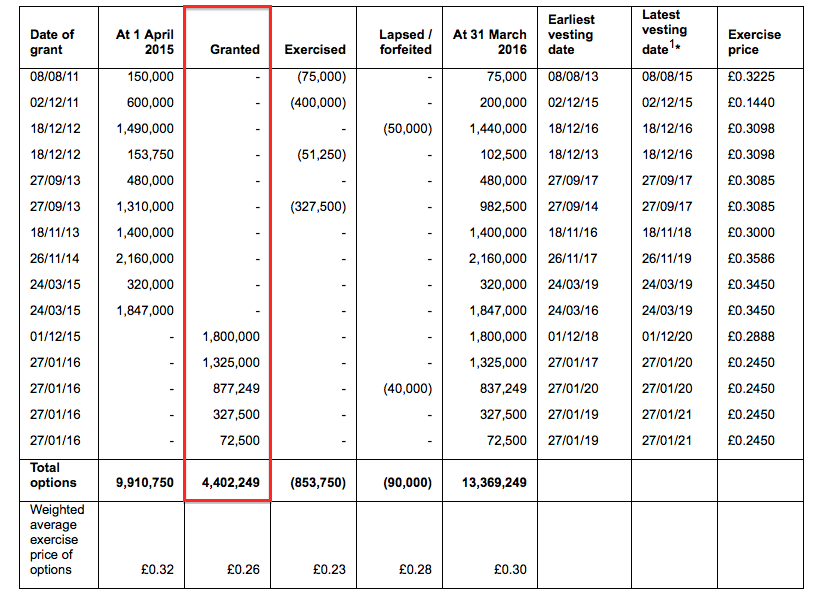 Back in 2012, there were only two million options in issue.

Adjusted for the near-five million shares held in an employee benefit trust, I reckon the potential dilution from all the current options is an acceptable 4%. (By the way, the directors need only to see earnings per share grow by 4% a year to get their hands on at least 25% of their option awards.)

Meanwhile, new office-lease agreements are set to cost the group an extra £316k a year.

* I can’t complain about these attractive ratios

I may be moaning about REC’s lacklustre revenue progress and rising costs, but the business does retain some very attractive accounts.

In particular, cash conversion is superb. During the last five years, next to nothing has been spent on tangible and intangible assets while only relatively modest sums have been absorbed into working capital:

The cash production has allowed a substantial £20m to be distributed as dividends since 2012.

Other positive ratios include operating margin and return on equity. Despite the staff pay rise, REC continues to convert 30%-plus of revenue into profit. The firm also requires a very small capital base to operate.

* The results highlight — a hint of a special dividend!

The sole positive surprise from these results concerned management talk of a special dividend.

Here is what was said:

“Since listing nearly nine years ago, the Board has been attentive to its responsibilities in building and maintaining a strong and sustainable balance sheet, ensuring the business is able to invest selectively in future growth whilst maintaining cash resources sufficient to support its needs.

The Board intends to continue its pragmatic approach; however it now considers the Group’s balance sheet and regulatory capital buffer sufficiently strong to support the consideration of returning at least part of any excess of future earnings per share over ordinary dividends to shareholders, potentially in the form of special dividends.”

So it looks as if earnings from here on in may be entirely paid to shareholders via dividends.

I just wonder if this decision has coincided with REC’s founder and 32% shareholder, Neil Record, becoming a non-executive the other year. Perhaps he is looking to boost his income now that he no longer collects a hefty executive wage.

The talk of special dividends could also be interpreted as REC admitting it has limited potential to reinvest its earnings — and might even signal the business perhaps giving up on trying to expand in any meaningful way. (I have long wondered whether REC would stand a better chance of flourishing as part of a larger banking group).

Something else to note is REC’s use of the word “potentially” in the phrase “potentially in the form of special dividends” — it does open the door for the less appealing share buyback.

* There is still a risk of a large client leaving

REC has always been dependent on a small number of large clients.

The past year underlined the dangers of such a customer base, with large client mandates both coming and going (but mostly going) with little or no notice.

REC’s top five customers contributed 60% of revenue during the year, with each representing at least 10% of the top line:

This concentrated customer base is not great, but surely those clients REC has retained must have now dug in for the long run.

I mean, these loyal clients have had every reason to jump ship due to the “narrowing expectations of interest rate differentials” and the like for the last five years.

* Something called “mandatory variation margin” has become a new worry

These results were the first to refer to potential reforms within the derivatives markets.

From what I can tell, some of REC’s clients may soon have to stump up extra cash on margin to enter into forward currency transactions (my bold):

“We are…concerned about emerging differences in regulation across these jurisdictions which may seem minor in the context of the overall regulatory picture, but which may have a disproportionate effect on Record given the nature of our business.

In particular, we are concerned that whilst deliverable foreign exchange forward contracts have been exempted from the definition of “swaps” under Dodd-Frank and hence from much of the consequent regulation, the latest draft rules under EMIR continue to mandate variation margin for foreign exchange forward contracts entered into by financial counterparties, which include pension funds.

Mandating variation margin is a major change from the historic practice of many of Record’s clients of using non-collateralised foreign exchange credit lines.

We are working hard to minimise any adverse impact on our business, both by continuing to engage wherever possible on these proposed rules, and by working with our clients, bank counterparties and service providers to manage the impact should this engagement prove unsuccessful.”

I must admit I have no idea whether all this will cause problems for REC — or how major any problems will become. For now at least, “mandatory variation margin” is just another niggling concern to add to the list with this business.

That said, I suppose there is a slight hope that the proposed European reforms may ultimately follow those of the US and exclude currency contracts from the changes.

Based on the latest effective assets under management (AUMe) and fee rates, I reckon potential management fees could come to £18.8m with £1 buying $1.47:

In terms of calculating a potential profit, I’ve assumed all costs remain the same, except for lease costs which I have increased by the aforementioned £316k. I’ve kept the profit-share scheme at 30% again:

After standard 20% tax, my revised sums suggest earnings could be £4.2m or 1.88p per share. Previously I was anticipating 2.07p per share.

REC’s market cap at 25p is £55m. Adjusting that for my surplus net cash and investment figure of £22m, I make REC’s enterprise value to be roughly £33m or 15p per share.

Then dividing that enterprise value by my latest 1.88p per share earnings guess, the P/E for the underlying business comes to just 8.

Meanwhile, REC’s anticipated 1.65p per share dividend for 2017 supports a 6.6% yield. I suppose that is a useful income to collect while the business continues to struggle to grow.

7 thoughts on “Record: Cash-Adjusted P/E Of 8 Plus Talk Of Special Dividends”