Summary: A quite satisfactory set of results from the country’s largest foundry operator. Revenue, profit, the dividend and net cash all headed in the right direction, while a shareholder bonus was news of a 30p per share special payout. However, counter-balancing the 2016 figures was the admission of less work at the higher-margin machining division, which will hurt 2017 progress. Still, the shares do not appear expensive and I continue to hold. 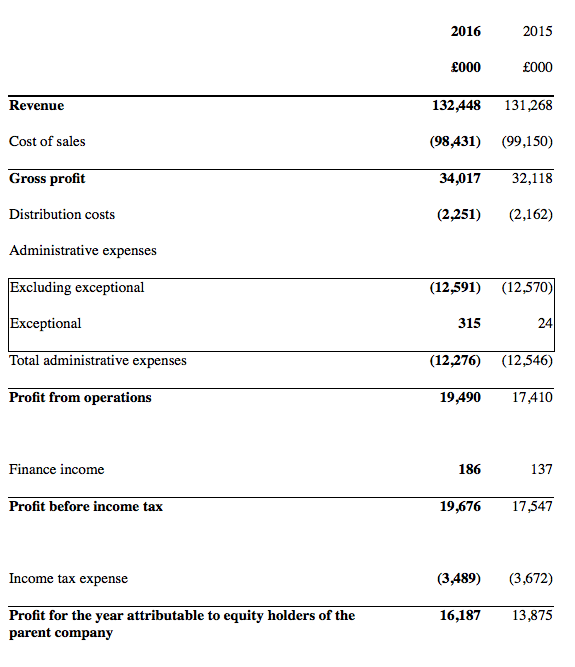 * I felt these results were quite satisfactory

November’s decent first-half figures had already suggested these annual results would not be too bad.

The top line was hindered by lower raw-material prices, as customer contracts can contain adjustment clauses dictated by external commodity values. Operating profit, though, experienced a much better performance due to a favourable shift towards higher margin and “more complex, machined parts”.

I was pleased in particular that CGS’s foundry division once again managed to increase the revenue per tonne of castings produced:

I was also glad to see the machining operation enjoy a super 26% margin before central costs:

The operating margin for the wider group was a worthwhile 14.5%.

While these 2016 results appeared respectable, the table below shows how they could not match up to 2012 and 2014, when vehicle legislation changes prompted bumper demand for certain products.

The group’s half-year split did not appear worrying:

CGS admitted a “major contract” had ended during the final quarter at its machining division, and that the replacement work would not “come on stream immediately”.

The half-year split for the machining division does show its profit dropping during the second half:

Encouragingly, the group described the forthcoming profit reduction as “temporary” and predicted that the machining division would enjoy a recovery during  2017/18.

I could not fault CGS’s accounts. In particular, cash conversion appeared healthy:

Capital expenditure was only £0.3m greater than the depreciation charged against earnings, despite £2m being spent on land and buildings.

Meanwhile, I was happy to see a favourable inflow of working-capital cash.

Excluding the mighty cash pile from the denominator, my return on average equity calculations show a very acceptable performance during the last year:

While I do prefer my companies to carry surplus cash, CGS’s bank balance had looked especially weighty for some time. I therefore welcomed today’s news of a 30p per share/£13m special dividend.

Apparently the board had “reviewed the cash position… and considered the balance between increasing returns to shareholders whilst retaining flexibility for capital and other investment opportunities”.

The firm added that the special payout “in no way compromises our commitment to invest in market-leading technologies to maintain our competitive advantage”.

Subtracting the aforementioned 93p per share net cash position from the 460p share price, my estimate of CGS’s enterprise value (EV) is 367p per share or £160m.

Dividing that 367p by my 35.2p per share EPS calculation gives a multiple of between 10 and 11 at the present 460p share price. That rating does not look wildly expensive to me, although earnings are set to drop this year due to the loss of that major machining contract.

Meanwhile, the ordinary annual dividend was upped 3% to 13.71p per share and supports a 3.0% income.