Event: Final results for the year to 31 December 2015 published 23 March

Summary: A somewhat better set of figures than I had been anticipating from this estate-agency franchising business. The second-half looks to have been bolstered by extra franchisee fees, which helped WINK register a decent second half and improve its cash flow. Margins and returns on equity remain superb at 31%, the shares do not seem over-priced — but will the Internet crush the income of traditional estate agents? I just don’t know, but continue to hold. 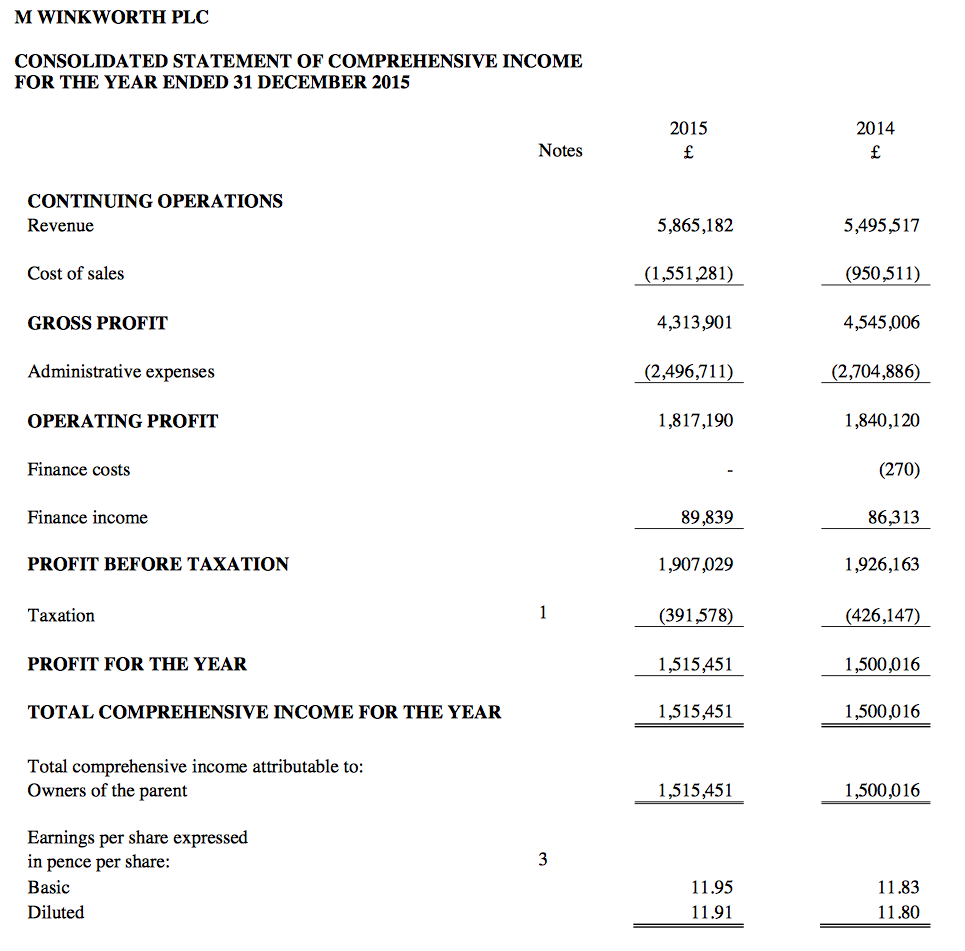 * These results were earlier than I had expected

I’m glad WINK has improved the efficiency of its financial reporting.

WINK has extremely simple accounts and yet, for the past two years, it had published its December-end annual results during mid-to-late April. For 2013, the figures were published as late as June, while prior to that they were published in May.

As far as I know, the group’s finance director remains a part-time employee.

It is probably no coincidence that the speedier financial reporting gave us results that were slightly better than expected (after all, good figures are easier to add up than bad!)

A trading statement in November had previously warned of a slowing London housing market, and signalled 2015 revenue would be in line with 2014 — but with profit “slightly below expectations”.

As such, I had pencilled in revenue of £5.5m and an operating profit of almost £1.6m for today’s figures. However, it turns out that revenue was close to £5.9m and operating profit topped £1.8m.

It seems as if WINK enjoyed a buoyant second half, with profit in H2 being the firm’s highest ever:

Looking back at WINK’s November announcement and then its declaration of a special dividend in December and then its more optimistic statement in January, I get the impression the group enjoyed a bumper December that looks to have continued into 2016.

WINK confirmed its estate-agency franchisees generated gross revenue of £49m during 2015 — down 2% on 2014.

However, WINK’s own revenue of £5.9m represented 12% of that £49m. The proportion for the previous five years has been about 11%:

I reckon most of WINK’s extra revenue has come from fees relating to new franchisees — 10 franchisees either opened a new or bought an existing WINK branch last year.

But maybe some of the extra revenue has come from the growing lettings side of the wider WINK network.

Here’s my best guess of the H1:H2 split between gross franchisee fees for sales and lettings:

Lettings currently represent 38% of WINK’s network franchisee revenue, and the group continues to target further rental properties to one day enjoy a 50:50 split.

Either way, a larger slice of gross franchisee income alongside a greater dependence on more reliable lettings income are both welcome developments.

I am pleased WINK’s cash position improved during the second half of the year.

Within the interim results, I noted the cash position had shrunk by £0.4m to £2.1m as the group continued to loan extra money to its franchisees.

“Overall, the cash flow situation is not great and I’m hopeful the next year or two will see i) some of the earlier franchisee loans paid back, and; ii) fees owed to WINK paid more promptly.”

Well, i) and ii) may have started to occur during H2.

I will need to study the forthcoming annual report to understand the full situation with the franchisee loans, but year-end cash of £3.2m is certainly a marked improvement on the half-year situation:

True, £90k is not large compared to the £1.8m operating profit. But it is money earned mostly from lending cash (probably about £1m or so right now) to franchisees to help start their operations. Right now, the implied rate of interest on these franchisee loans is much better than that available in a standard deposit account!

All told, I reckon WINK’s effective cash position is about £3.9m if you factor in the franchisee loans and subtract the recent special dividend payment. The business continues to operate without any debt, too.

For the first time I can recall, WINK referred to an “online offering” within its results:

“The increasing number of services introduced by the Company reinforces the strengths of the brand while increasing its appeal and profitability. As part of our three-year plan, centralised services will be fully integrated into an upgraded Winkworth online offering by 2017 and, as these gain further momentum, we expect to see them contribute to long-term growth in both net profits and new franchise interest.”

Some 81% of WINK’s revenue comes from its London branches and while stamp-duty changes and the EU referendum have created some uncertainty within the capital’s housing market, a more fundamental problem for WINK is the growing presence of online estate agents.

Recent results from Purplebricks (PURP), which describes itself as a ‘hybrid’ online agency, has provided an insight into the possible future of estate-agency fees.

I suspect WINK’s fees are not as high as those of FOXT, while PURP does charge more for selling London properties. Nonetheless, saving up to £10k commission on a house sale must be attractive to some vendors in London.

I have spent some time thinking about the advent of PURP and the effect it will have on WINK, and I must confess I have still not arrived at a firm conclusion.

My best guess right now on the future of estate agency is that traditional and online agents will co-exist, but the fees charged by the former will probably reduce over time.

That fee trend could impact WINK and its franchisees — and I guess there is the chance the likes of WINK could suffer a structural upheaval similar to that experienced by the newspaper sector.

Either way, no doubt the founders of PURP view WINK’s profitability as ripe for the taking. Today’s results showed WINK’s operating margin and its return on average equity for 2015 both standing at a wonderful 31%:

* Divide that 107p by the 11.4p earnings estimate and the P/E comes to 9-10. That does not appear expensive given the business has “enjoyed a positive start to the year”.

7 thoughts on “M Winkworth: I Just Don’t Know If Online Rivals Will Crush These 31% Margins  ”