Event: Preliminary results for the 52 weeks to 27 December 2015 published 30 March

Summary: An acceptable but not a spectacular set of results from this restaurant group, with the second half showing a slower rate of expansion. I also note revenue per outlet has declined while management is hinting strongly at greater investment spend. Nonetheless, the board is a class act, the opening schedule for new restaurants is accelerating and the longer-term potential remains sizeable. I continue to hold. 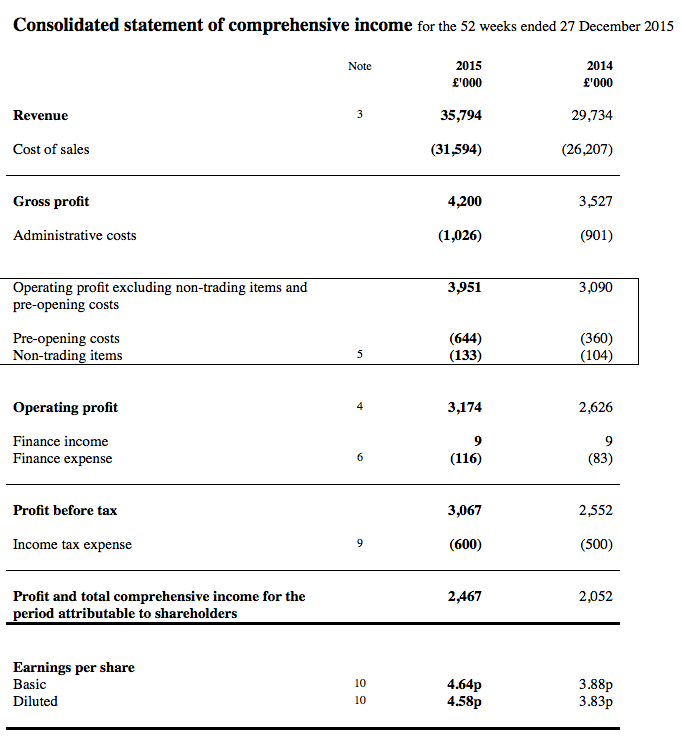 * These results were acceptable but not as spectacular as previous figures

First off, top marks for TAST for presenting these preliminary results with an extensive set of accounting notes — which even disclosed individual director pay. (I do wish more companies would include such additional notes within their results RNSs, rather than leave them for the annual report!)

Here’s how today’s headline figures compare to those of the previous four years:

I felt TAST’s 2015 progress was acceptable, but not spectacular. Perhaps I was a little spoilt with the preceding bumper results, but I was expecting a greater rate of expansion.

* Extra restaurants did not create as much extra revenue

All but one of TAST’s new sites for 2015 was located outside of London and I suppose these new locations will probably struggle to reach the turnover that TAST’s established sites in the capital can produce.

However, I do note that TAST opened a net 8 sites in 2014 — again mostly outside of London — and during that year the group generated extra revenue of £6.5m. And yet today’s results showed more sites had opened in 2015, but the extra revenue was less at £6.0m.

It’s all a bit confusing — but at least TAST has shown some inconsistency before with its revenue and extra sites.

All told, I’d like to think the current year will see much more than £6m added to the top line — especially as 15 new sites are now planned.

* Margins up again, but strong hints of greater costs

Although TAST’s gross margin can be somewhat variable, indirect admin expenses have been kept firmly under control to ensure the group’s overall margin continues to improve as the restaurant estate expands:

But will TAST’s operating margin gain further in 2016? I am not so sure. Today’s results hinted strongly at greater central costs (my bold):

“We are now preparing for an acceleration in the rollout programme with the appointment of David Street as property director and a number of key business functions will be expanded and strengthened to facilitate this more rapid growth.

A significant investment will be made to upgrade the existing restaurant websites and greatly enhance the entire digital marketing strategy for the Group, which will increase the reach and recognition of all the Tasty brands.

To ensure that we retain our high level of food quality and consistency we will be investing in Tasty’s Central Kitchen’s infrastructure.

Additionally, a number of appointments are being made in our Operations, Marketing, Finance and People departments, along with a number of systems upgrades, to ensure a continued successful expansion programme.”

Something to bear in mind is the National Living Wage. Its introduction on Friday (1st April) will see workers aged 25 or more receive a minimum of £7.20 an hour, which will increase to £9 an hour by 2020. (The current minimum wage is £6.70 an hour.)

Just so you know, last year the average TAST restaurant employee was paid about £16k and the 836 restaurant managers, chefs, waiters and barmen were paid 36% of the company’s entire revenue.

TAST’s expansion continues to be funded by debt. The full year witnessed TAST’s net cash position of £1.3m turn into net debt of £3.5m as the business spent £9.8m on new restaurants.

With TAST’s expansion set to increase from 12 to 15 new outlets for 2016, my rough sums suggest the firm will need to take on more debt to fund its growth.

I see things this way…

And even if £10.5m was enough, then repeating the feat for 2017 could be a challenge if the present £8m debt facility has been used entirely.

For a comparison, ex-sister company Prezzo (PRZ) raised £16m from investors between 2004 and 2006 to take its estate from 35 to 98 restaurants — at which point the business became self-funding. TAST presently has 50 sites.

At least TAST’s debt costs do not appear onerous — the interest charge for the last twelve months came to just £116k. I am also pleased the group continues squeeze extra cash from its working capital:

“Since the year end we have opened two more restaurants and a further two sites are under construction.    The property pipeline is looking strong for 2016 and we expect to open 15 sites”.

Meanwhile, some excellent research from a reader (thanks David!) pointed me to TAST job adverts citing 30 new openings during the next 18 months.

Plus, it’s worth noting that TAST’s original Dim t chain has added one extra outlet. Serving Asian food, this brand did not catch on at first and it was mothballed by management a few years ago in favour of the more mainstream Wildwood pizza format.

But perhaps now there could be life in Dim t:

“Alongside the Dimt in Whiteley, we opened a Wildwood, the first time the Group have operated these two brands in the same location.  Both sites are trading above expectations and pave the way for similar future openings if the opportunity should arise.”

The Kaye family has already built and sold two multi-bagger restaurant chains (ASK Central for £223m in 2004 and PRZ for £304m in 2015) and I continue to see no reason why they cannot complete the hat-trick with TAST.

The projected return could be lower of course. Factors to bear in mind include: i) PRZ carried freehold assets worth £33m (TAST does not own any freeholds), and; ii) PRZ’s net cash position was £14m (TAST operates with net debt).

* In the meantime, the shares remain highly rated

TAST’s trailing P/E is 35— so the downside could be considerable if a setback occurred and/or the expansion history of PRZ can’t be replicated.

I suspect management’s comments of greater investment may limit near-term earnings growth — which could well keep a lid on the share price for now.

31 thoughts on “Tasty: Profit Up 28% But I Am Not Entirely Satisfied”